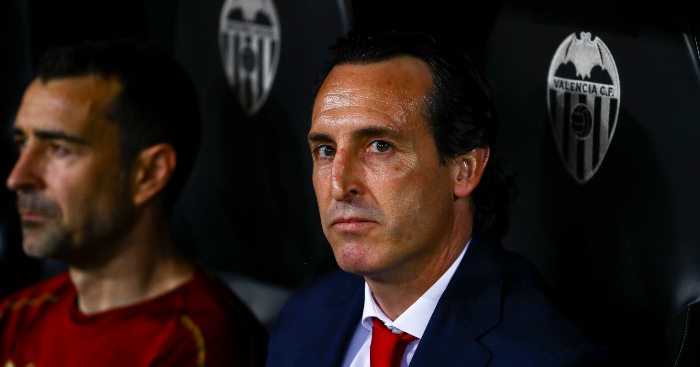 It’s been an interesting first season for Unai Emery at Arsenal, with plenty of ups and downs.

Succeeding Arsene Wenger, who spent 22 as Gunners manager, was always going to be a tough job. But the Spaniard has shown some signs of developing the side, while he has a chance of securing silverware and Champions League football in the upcoming Europa League final against Chelsea.

Just over a year to the day since it was announced Emery was announced as Arsenal manager, here are some of his most interesting quotes from his first season in charge.

“With personality,” he responded when asked how his teams play in his first interview for the club.

“This personality for all the minutes of a match: protagonists. I like the possession with the ball, I like good pressing against the other team. I prefer to win 5-4 than win 1-0.”

Here's what you voted as our December Goal of the Month 🌟

“I met once with him, and little else. I respect him a lot, but no matter how much info he gave me, I had to change things.

“I told the players, ‘We started at kilometre zero.’ Even now, four months later, I still say it, ‘We are in the beginning!’”

Speaking when his side were enjoying a brilliant unbeaten streak back in November, Emery vowed to try to blend the best of Arsenal teams from the past.

“Before Wenger arrived, Arsenal celebrated the 1-0 [win] and was based on defensive solidity. Then with Arsène, joy was turned into attack, with players of good standing, and the perfect combination was the Invincibles,

“But over time, only technical quality and offensive freedom were taken care of, and the team lost the defensive structure. What I want is to unite both essences and be more competitive. The Arsenal was in decline. We had to stop it and start climbing.”

“I did not promise titles, I promised to compete,” Emery recently told El Mundo in a wide-ranging interview. “What Wenger did in this club was very big. He managed to give a touch of quality to make the game more fluid and colourful, but little by little he lost the competitive gene.

“That is what was transmitted to me and what I was hired for when I interviewed Raúl Sanllehí and the owners. The economic potential of United, City or Liverpool is greater than ours, but by history and structure, Arsenal is among the top 10 clubs in Europe, and we have to place it there again.

“It is the most competitive here. Each team gives us a difficult game and the spirit here is very high” was Emery’s analysis of the English top flight, having worked in Spain, France and Russia before.

“Tactically they are also improving a lot here with very good coaches, also the English coaches. I think now the championship here with 20 teams is the best.”

“Arsenal’s environment is all about respect,” Emery told El Mundo. “When I was at PSG, I tried to communicate in French, but people were sarcastically mocking my efforts.

“Here at Arsenal, I speak broken English, but all I hear is complementary words for putting the efforts in and trying to speak.”

Emery even touched upon Brexit in the interview with the Spanish publication, when it was pointed out that the Premier League’s success has come thanks to the influence of foreign managers and players, despite England voting out of the European Union.

“We already know what nationalism is,” he said. “Crises give wings. I am Basque, I know what I am talking about, and I am comfortable as Basque and Spanish. When there are problems, people tend to be rooted, to defend the inside.

“Personally, I think we have to open borders, not close them, and when you go outside, you have to make an effort to enter into another culture.”

"Throughout my career, I was winning to avoid being sacked. Here at Arsenal it is the opposite. I win to build something (for the long term)." #AFC pic.twitter.com/6vurwxzCdw

Emery also went on to explain the variety he desires in his tactical philosophy.

“I want us to be a chameleon team, able to play in possession, in static attack against close opponents, or to counter-attack.

“For the first, Ozil suits very well, he has the virtue of discovering spaces. For the second, Aubameyang. To the extent that we are able to combine it, we will grow.”

Qualifying for the Champions League

“The Premier League is our priority, and our objective in terms of the table is to finish in the top four,” Emery told Arsenal’s website back in November.

“The club wants to return to Europe’s top club competition, which is the Champions League, and we have two opportunities by which to do that – one is the Premier League and the other is the Europa League.”

They didn’t quite manage top four, but they still have every chance of qualifying via the Europa League, a competition Emery has already won three times with Sevilla.

How the team can improve

“I want us to be more defensively solid, of course, and we know we need to work on certain things, but the team has made progress.

“A season can help you to improve, to understand everything better and to continue with your process, and I believe that’s where the club is now. We all want immediate results, but sometimes it requires patience.”

“In my career I do not feel pressure but the demand [to do well]. I want to be demanding with the club and players because I know it’s a difficult way for us, but never I felt the pressure. I enjoy my job.”

Building something at Arsenal

“Throughout my career, I was winning to avoid being sacked. Here at Arsenal it is the opposite. I win to build something (for the long term).”