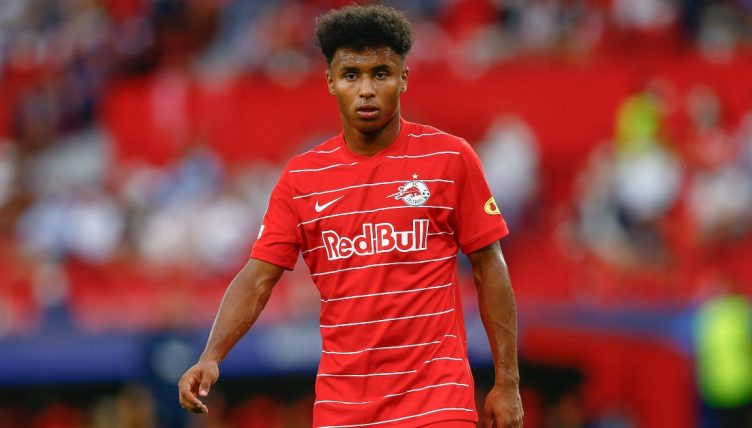 Despite possessing one of the most fearsome forward lines in world football, Liverpool are reportedly still targeting Red Bull Salzburg striker Karim Adeyemi.

Adeyemi has enjoyed a prolific season so far, scoring seven goals in 11 appearances in all competitions and making his debut for the Germany national team. But is he suitable for English football and a move to Anfield?

We’ve brought you the lowdown on the 19-year-old who could move to Anfield in January.

Adeyemi was born in Munich in January 2002 to a Nigerian father and a Romanian mother – giving him three options for international football. He played as a youth for TSV Forstenried and joined Bundesliga side Bayern Munich in 2010.

He remained at Bayern for two years but was forced to leave the club after an impasse in contract negotiations. Therefore, Adeyemi ended up with SpVgg Unterhaching.

Having progressed through the youth ranks, he played for the club’s Under-19 side before transferring to Red Bull Salzburg prior to the 2018-19 season.

He was immediately loaned out to their sister team, FC Liefering, to gain experience and accustom himself to the Austrian style of play.

Adeyemi scored six goals and made four assists in 20 games in his first season – impressive figures for a 16-year-old in the second-tier of Austrian football.

His breakout 2020-21 season saw him score seven league goals in 29 games (11 as a starter) and provide nine assists as an 18-year-old. He sometimes featured upfront along with Leicester’s Patson Daka or on either wing.

And he’s continued his red-hot form into the current season – attracting the attention of European heavyweights Barcelona, Bayern Munich and Liverpool.

Adeyemi is predominantly a striker, but he is also capable of playing on either wing.

He tends to position himself deep down the central channels or drift out wide in the attacks and in the build-up to get more time on the ball – not unlike Thierry Henry or Wayne Rooney in years gone by.

When taking on the opposition, Adeyemi mostly relies on his lightning speed, incredible acceleration, and quick change of pace to get past his marker.

But perhaps his greatest asset is his composure. Adeyemi seems cold-blooded in front of goal and is able to exploit space between himself and the goalkeeper by utilising both feet.

It can be argued that his decision-making needs to improve, although this is the case with plenty of young players. His passing isn’t currently a strength either – Adeyemi achieved a pass completion rate of just 57% last season.

The player himself has also stated in an interview that the two areas of his game he himself wants to improve are the defensive contributions and perfecting his technique even further.

– When being asked why he chose Salzburg ahead of Barcelona or Chelsea he said: “It was important for my parents and me that my new club had a plan for me. That was the case with Red Bull Salzburg. The style of play and the philosophy convinced me.”

– “If Bayern made me an offer, I would choose this path,” the 19-year-old told Marca after Salzburg’s 1-1 with Sevilla in September 2021. “I want to show them what I can do for who I am and that it was a mistake to let me go. That motivates me.”

– “I believe that I get a lot beyond my speed, often look for one-on-one and sometimes trust myself more.,” he told Kicker in August 2021. “And then … hopefully, score goals.”

When asked how his role models were, the forward replied: “I don’t really have any role models. Only players who I may be similar to in terms of playing style, who I therefore like. So, from my point of view, [Kylian] Mbappe, [Serge] Gnabry, [Pierre-Emerick] Aubameyang.”

– “From a sporting perspective, it was completely clear that he could become a professional,” Unterhaching president, and former Bayern and 1860 Munich midfielder, Manfred Schwabl told Goal.

“The only thing that could ruin the career of the boy was if he got injured or if we personally got something wrong.”

– “He used to be a bit of a shrew,” said Ognen Zaric, who coached Adeyemi in Unterhaching’s Under-17s side. “The key was then that we quickly gave him a lot of responsibility in the team. He did a great job.

– After scoring on his debut for Germany, national team boss Hansi Flick said: “He’s already shown at the start of this season that he can be ice cold in front of goal. He did really well today when he came in.”