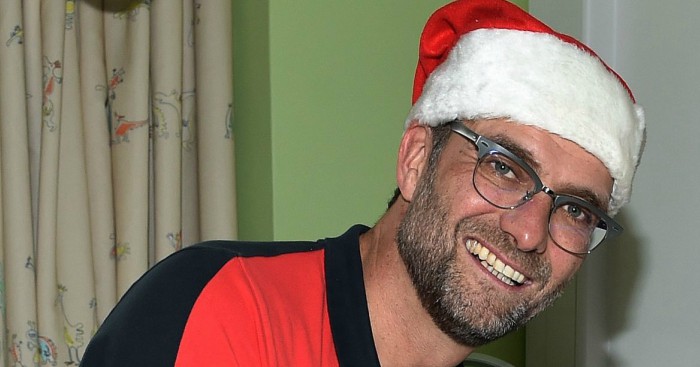 It’s that time of year where families are forced together and true personalities cannot help revealing themselves.

We often find ourselves wondering what Christmas with Roy Keane must be like, but now we’ve turned out attention to festivities with every top-flight boss. If you take this seriously, that’s your fault.

Inside his immaculate household, Arteta is shouting out numbers and timings for each individual aspect of his itinerary in a desperate attempt to find the optimum formula for a smooth Christmas.

In the event, he panics. A meltdown ensues behind closed doors upon the realisation that the roast potatoes will take longer than expected, while nobody has ordered the cranberry sauce. The end result is a bland and disappointing dinner.

Perched on a sofa away from the main table, next to an enormous cuddly dinosaur, Arteta’s wayward teenage son smiles to himself and returns to his game of Fortnite.

It’s Christmas Eve and Smith is making phone calls and checking his texts twice – it won’t be Christmas until his beloved Jack comes home.

The next morning, somewhere in the Birmingham area: fresh from an evening at the pub, Jack wakes up in an unfamiliar bed and rushes home, Driving Home for Christmas blaring inappropriately on the stereo.

Despite being peeved with his attitude and time-keeping, Smith greets Jack with a smile. He can never stay mad at him for long. Uncle John administers the deserved scolding.

Once the family are together, Christmas runs surprisingly smoothly. Sure, the extended family run amok but the day itself is a slick affair.

Seduced by life on the South Coast, Potter has converted to veganism and imposes a meat-free Christmas on his unsuspecting step-family.

A nut roast becomes the Christmas dinner centre-piece, the pigs-in-blankets are now mushroom based and only the finest IPAs are allowed to be consumed.

Despite the benefits of this new regime, most of the Privet Drive residents are starting to wonder whether life would be more fun elsewhere.

It’s three in the afternoon. Interrupting the festivities, Dyche springs from the table and rushes over to the television. After fumbling with the remote, the picture settles upon an image of the Queen delivering her message to the nation.

Hushing the room, Dyche stands to attention and devours every word. After its over, he bellows out the national anthem with alarming passion, eyeing up the other guests and forcing them to join in.

He returns to the table, downing the dregs of his beer and restarting the conversation he had abandoned. The slightly startled room pick up where they left off, but the vibe has irreversibly changed.

Dyche does not give one solitary eff.

Lampard has spent most of the run-up to Christmas telling everybody that he’s developing a great crop of home-grown vegetables in his back garden for Christmas dinner.

But when the meal is served, it turns out he has invested a huge sum on the most expensive produce Waitrose and M&S has to offer. It’s awkward.

Definitely the manager most likely to give his grandchildren an orange in their stockings.

Italian delicacies abound inside Casa Ancelotti. Upon arrival, guests are greeted with panettone, florentines and vin brule which instantly transports them to the picturesque market squares of Tuscany.

The wise old man generally lets his grandkids dictate the day – that infamously damning eyebrow is only raised when his son-in-law chances a risque twist on a Christmas cracker joke.

Once a battle-hardened player, Scott E. Parker has the sweetly naive air of a delicate deer plucked from an Enid Blyton tale nowadays.

Accordingly, Christmas at his house is earnest and well-meaning. Welcoming extended family in his crispest white shirt, Parker has arranged a wonderful platter of nibbles to accompany the dinner and proves to be an accomodating host.

Even the failure of any of his children to pin the tail on the donkey cannot detract from his efforts.

Despite being more popular in Leeds than Santa, Bielsa will undoubtedly reject the traditional festivities in favour of some fevered video analysis.

While his family celebrate back in Rosario, Bielsa dips his hand into a family bag of Twiglets and resumes work – Christmas stands in the way of innovation. 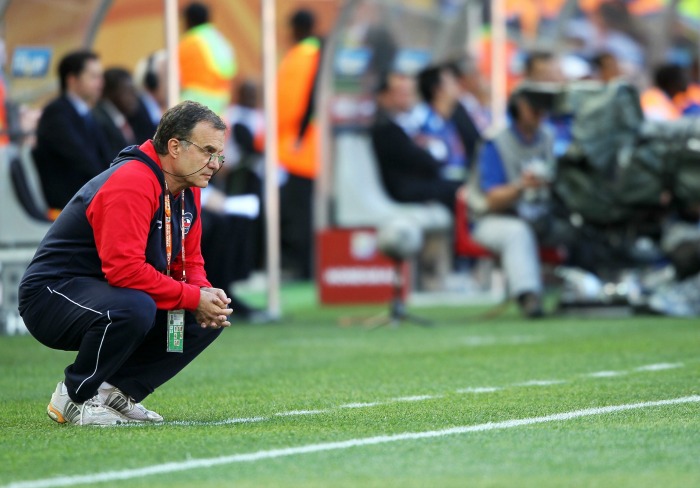 Christmas morning in the East Midlands. The kids are excited, Rodgers’ wife is feeling festive and all seems set for a memorable occasion.

Enter Brendan. Sitting his family down in front of the 50″ plasma, Rodgers delivers a thorough PowerPoint outlining his expectations for the day. His wife pretends to fall asleep, one child actually does and the presents remain unopened under the tree

Once the presentation is over, night has fallen. Brendan reflects on a PowerPoint well done, while his family ponder upon the Christmas that almost was.

Ensuring his family are working like a cohesive army of elves, Klopp has time to ensure the big day is memorable for all involved.

While his son stuffs the turkey and his wife serves mugs of gluhwein, the German has dressed up as Santa Claus and litters the living room with presents that vary from the homespun to top-of-the-range gifts. His booming laugh registers as a minor earthquake on the Richter scale.

Relaxing on his sofa with an Erdinger as night approaches, Klopp contently reflects that life does not get much better than this.

Guardiola has served a million immaculate roast dinners, impressing his family and guests alike with flavours and combinations they’d never tasted before.

Drunk on a dangerous cocktail of complacency and boredom, he decides to change things up on the big day. Turkey is substituted for gammon and the cutlery is arranged in a formation nobody can quite conceive.

As a result, the expensively assembled dinner underwhelms somewhat. Nobody wants to say anything for fear of tipping him over the edge.

Solskjaer, already possessing the appearance of a woodland creature who regrets asking a magical tree nymph to turn him human so he can manage his beloved Manchester United, is determined to have a traditional Christmas.

Asking Uncle Roy to dress as Santa Claus, with Sir Alex the red-nosed reindeer in tow, proves surprisingly popular with the children. Solskjaer, pacing the room and repeating the phrase, ‘This is Christmas, this is what we do,’ has the opposite effect.

The guests cannot ignore the smoke emanating from the kitchen and family pet Harry has knocked the tree over. Thankfully, he’s brought back gifts from a recent trip to Portugal. Christmas is narrowly saved.

The well-meaning Bruce desperately wants to be involved but cannot avoid causing a catalogue of calamities.

Seeking refuge in the kitchen, he drives his busy wife to distraction and is ordered to wait in the garden shed. Many hours have elapsed before Bruce devours his lunch.

Having survived the day, Bruce tucks in his grandchildren and reads them another chapter from his Steve Barnes trilogy. Another family Christmas has passed just about successfully. 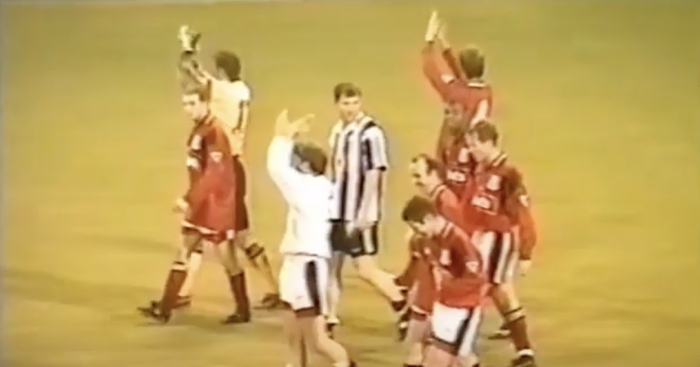 READ: ‘Mystery man is a Geordie’: The story of Newcastle’s strangest ever goalscorer

This time last year, Christmas in the Hasenhuttl house was tense. An embarrassing incident around Halloween had left relations strained and there was much talk of separation.

Now things are much happier. A year of reconciliation and growth has left the Austrian feeling in the mood to celebrate.

Generous servings of strudel are greedily consumed during a repeat of The Sound of Music, while Hasenhuttl steals the show with an elaborate depiction of Die Hard during the annual Charades tournament.

Despite the intensity, all involved have a marvellous time.

Against all expectations, Christmas at the Mourinho residence has gone surprisingly smoothly.

Jose, on his best behaviour, has been an exemplary host. But this Christmas truce lasts only until the Monopoly board makes an appearance. After a promising beginning, Jose starts falling behind and cannot handle the light-hearted teasing that results.

Eventually losing all composure, he flips the board over and storms from the room screaming, “The best player lost.”

Watching Mrs Brown’s Boys slumped into his armchair with a bellyful of liquor, Big Sam reflects on a day well managed in the manner of his spirit animal Jim Royle.

Yes, his mother-in-law has requested the heating be turned up to intolerable levels and his daughter’s husband turned up as a topless rotund Santa. But Allardyce picks his battles and is satisfied that his household has survived to fight another Christmas.

Divorced, but tentatively rediscovering his mojo with one of his old flames, Moyes has picked up some canny bargains for the big day.

Gorging himself on shortbread and whiskey, Moyes’s choice of Czech beer goes down a storm with his guests and he even manages to get a tune from the rickety piano the previous owner had discarded.

The sheepish guests don’t know what to think any more. The Moyesiah is back. It’s a Christmas miracle.

Nuno’s patience has snapped. Despite plans for a lavish Portuguese Christmas, he gathers the family together and declares that the festivities are cancelled. Any dissent is met with an intense glare.

By Christmas morning the tree has been taken down, presents are hidden in the loft and Nuno consumes some Museili before embarking on his daily 10k run.

His stubbornness has vanished by New Year, but his children have been taught a lesson they’ll never forget.