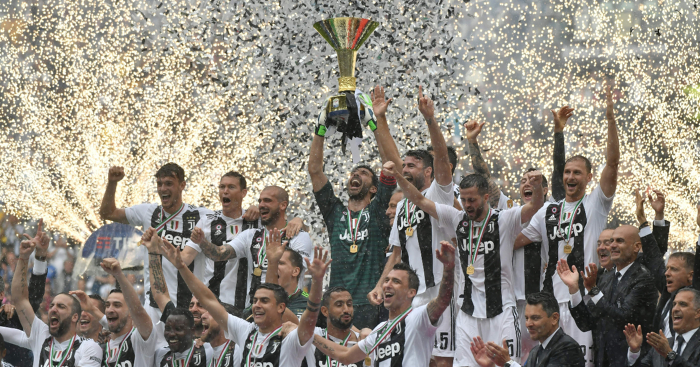 With Juventus securing yet another domestic Double this season and winning Serie A for a record seventh time in a row, it makes you wonder what it would take to stop them? We decided to find out.

How did that Gary Lineker saying go again? “Football is a simple game. Twenty-two men chase a ball for 38 matchess and at the end, the Bianconeri always win?”

Well, it’s time to take them down a notch. In the alternative reality of Football Manager at least, anyway.

In order to make sure the league remains competitive: we deduct seven points from them for the sin of seven title wins in a row (appropriated as ‘match-fixing’ in the engine, for, you know, reasons) and, just to make sure, we also hit them with a transfer ban.

Work with what you’ve got, Juve, it’s not like it hasn’t been good enough so far. 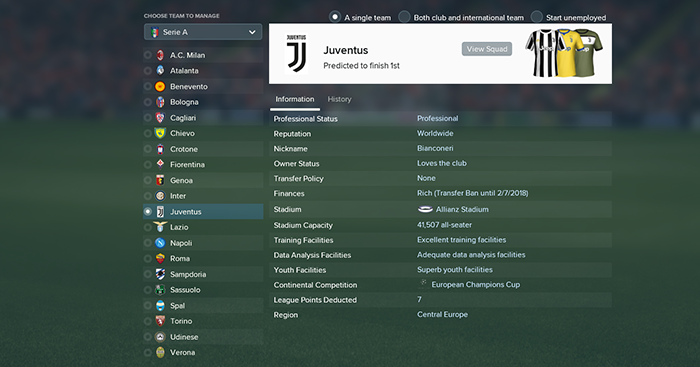 Worryingly enough, the FM engine still predicts them to finish in first place despite these completely fair and reasonable balance changes.

It’s just like weight penalties in racing; they are simply doing too well and need to be reined in. We’re doing a national service here. 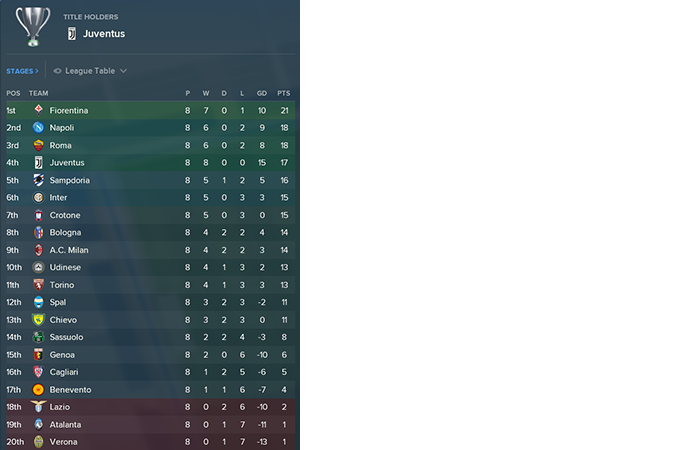 Oh my. The seven-point gift gap is down to four after just eight games, with Juventus winning eight out of eight.

They’ve already established themselves in the top four, one point behind Napoli, beating them at home and Inter at the San Siro. They’ve got the best goal difference in the league and have won their first three games in the Champions League, too.

I’m starting to realize how movie supervillains feel like when their best-laid plans start to go wrong. The list of highest-rated players features way too many from the Juve squad for my liking.

Gonzalo Higuaín is topping the goalscoring chart and leading the pack for average rating as well. Their next game is against Sampdoria. They win that, too.

By mid-December, they are in second but still four points off the top despite massive changes. Fiorentina fail to maintain their good start and fall down to fourth, while Roma pull away after inflicting the season’s first defeat on the Bianconeri at home in a tight affair that ends 1-0.

However, they fail to make it out of their Champions League group, unlike Juventus, who take top spot with 16 points. They will have to contend with Simeone’s Atletico Madrid in the round of 16.

By the time the winter break rolls around, the situation is getting even more grim, at least from my perspective. 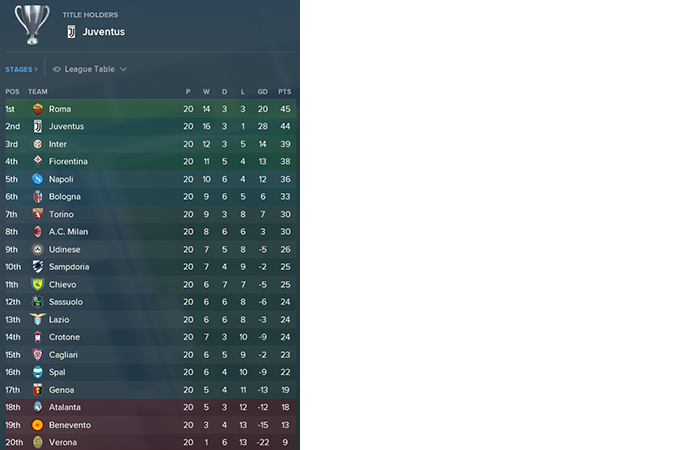 To put things in perspective, they would be six points clear if I hadn’t made my lovely little adjustments. Their goal difference lead is humungous.

With the way the momentum is shifting towards Italy’s perennial winners, it honestly feels like some sort of divine intervention is needed to help out their rivals.

This is when… hmm… an unfortunate and terrible accident happens to Gianluigi Buffon, the talismanic veteran goalkeeper of the side.

After falling over in the shower while listening to We Are The Champions, he suffers an injury which reduces all of his in-game stats to one. This is tragic, very sad, and certainly not the result of me tinkering with the in-game editor.

Sometimes life can be this cruel, and Football Manager is also capable of simulating such freak events.

Buffon is swiftly replaced by Wojciech Szczęsny for the rest of the season.

No, I don’t have a dustbin for a heart, why are you asking?

It seems like no matter what I do, it’s impossible to keep Juventus down.

By mid-March, they wrestle away the pole position from Roma, gaining valuable wins and draws against top-four rivals – and also taking down Atletico Madrid over two legs.

They have Roma still to play, on April 15. Oh, and have I mentioned they are in the final of the Italian Cup?

As terrifying as these developments are, it’s time that I take my hands off the steering wheel and let the rest of the simulation play out in earnest. If I haven’t done enough damage so far, I never will.

Szczęsny has the second-most clean sheets in the league despite not featuring for most of the season. This is ridiculous.

But Inter Milan have managed to slip through the cracks, creeping to within two points of the Bianconeri despite their incredible 25-8-3 record.

With two games left to go, it’s all to play for, but the fixture list couldn’t be kinder to the defending champions: only Verona and Genoa, two already relegated teams stand between them and an astonishing eighth title in a row.

Inter’s job isn’t much harder – Crotone in 16th and Atalanta in 17th – but that two-point gap and Juventus’ superior goal difference means the end result is out of their hands.

In the end, the simple art of choking does what none of my tinkering could, though perhaps my cruellest punishment certainly plays its part in their demise. 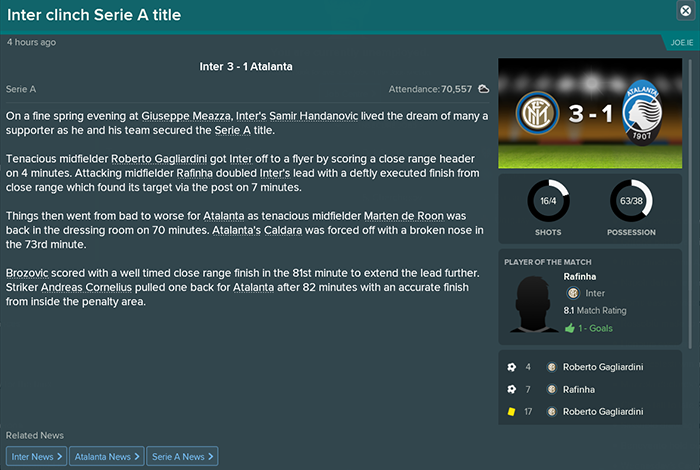 Despite taking the lead after eight minutes, Juve lose the very last game of the season.

Genoa managed to turn the match around with two quick replies, and despite Douglas Costa’s equaliser just before the interval, a third concession in the 48th minute sunk them at the very end.

Why? Well, they decided to play Buffon in goal and promptly shipped three goals against an already-relegated side. I sort of feel bad for them, but my job here is done.

What does it take to stop Juve? A decrepit Buffon.