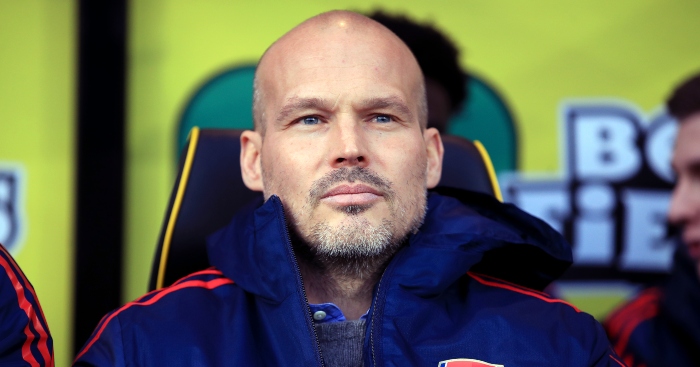 Arsenal are in the hunt for a new manager following the sacking of Unai Emery, with Freddie Ljungberg currently in charge of the first team on an interim basis.

Ljungberg made over 300 appearances for the Gunners between 1998 and 2007 before making his first steps into coaching after retirement.

The Swede managed Arsenal’s Under-23s last season and guided them to second place in the Premier League 2, and we’ve taken a look at what some of those to work alongside Ljungberg have said about his coaching credentials.

“Freddie is fantastic and committed and will want to do this job for a long time. He has an opportunity and what you want in life is that opportunity. Let’s get him to work with his ideas and support him.”

“It’s fun and I am very happy for him. Run your own race Fredrik, it will go well,” Eriksson told Swedish publication Fotbollskanalen upon Ljungberg’s appointment as caretaker.

“I think that [popularity with fans] is very important, it can only be an advantage for him. He knows the club inside and out so it’s good.

“There are two things: I think he can handle it, when I knew him anyway. Like I said, I haven’t met him for many years but I think he’s a very cool guy who doesn’t stay awake at night or is nervous.”

1 – Freddie Ljungberg will be the first Swedish manager to take charge of a Premier League game since Sven-Göran Eriksson, whose last game in the competition came in May 2008 in charge of Manchester City (an 8-1 defeat against Middlesbrough). Smörgåsbord. pic.twitter.com/xjqp1TOvkI

“He worked with me a lot on my body shape, my first touch. Going forward, he wanted me to shoot more. He would take the time to show me techniques: how to shoot properly using the outside of your foot, for example.

“With crosses, he showed me you don’t always have to whip it. How to pick someone out. It was always constructive criticism.

“I think Freddie’s got the whole package. I think he’ll be massive at Arsenal in the years to come.”

“He can give us something special. His career speaks for itself. We will try to follow him and give the best for him. Everybody is respectful of Freddie. He played for Arsenal, he knows as a player how we feel. It’s interesting to have him.

“We had only one [training] session with him, maybe two for those guys who didn’t play on Thursday. We will see this week what is going to happen. I think it’s good for us. He played for Arsenal and he has this in his heart.”

“Freddie is not only such a legend at the club, he’s an unbelievable manager and coach. He’s a mentor for me, he showed me a lot behind the scenes that people don’t really know about.

“Every day I’m working with him and I’m learning from him. He’s improved my whole overall game. If I’m being specific, getting in the pockets when I’m playing No 10 and attacking at No 8.

“He showed me a lot of different tactics to get space and turn to attack other teams. Those are the main things really.”

“He knows Arsenal perfectly, the young players, he helps us every day in training, the matches and before.

“He knows the characteristics of the Premier League. I’m very happy with him.

“Each assistant has their work. We are together to speak with the players. We are in the dressing room, we spoke about all the situations individually. We share some moments.”

“It helps me so much having Freddie on the training pitch. Sometimes when the manager (Emery) is trying to communicate with me I don’t understand what he is saying and Freddie speaks better English.

“Freddie has been a player at this level before and a very good one. He played in the same position as me on the left wing and he’s been a big part in my progress.

“I couldn’t ask for much more than to have an Arsenal legend giving me advice every day.

“He’s been with me since I was 15 and seen me do amazing things but his main message is always to stay humble and keep working hard because he really thinks I can be a top player.”

“Freddie changed the team’s style a bit. With Freddie, we played more ‘man’ football, more realistic football. We knew sometimes we could not play out from the back so why take a risk?” Pleguezuelo told The Athletic.

“He was trying to adapt us to men’s football. Sometimes we would play more long balls, more counter-attacking. It was a good combination.”

“They’re very high [Ljungberg’s demands],” Nelson told Arsenal’s official website in August 2018. “He’s a great coach as well and I think he’s got very high standards for the young group that we have.”

“There’s quite a few things [I have learnt from Ljungberg] really. He knows me as a winger, so attacking-wise he’s helped my game a lot.

“Defensively, I go to someone else to help me because they’re two different styles that I have to play. Him personally, he’s pulled me to the side a lot and has shown me different techniques and ways of beating players, ways of crossing the ball and shooting.

“It’s helping me and I’m happy to have him around because he’s such a big figure in the team.”

“When he was a player, he liked to speak up, he always had something to say, especially when we were in bad moments. I think that he is capable of taking on the challenge,” Pires told Canal Plus.

“Now he is going to try to implement his style of football, his philosophy, which is by the way the philosophy that he learnt when he was an Arsenal player. And after that, a manager purely depends on his players. He is capable of staying.

“What I think is good as well is that football needs new faces, freshness. Freddie, a bit like, Steven Gerrard or Frank Lampard, are good coaches and I hope for Freddie that he stays in that role for as long as possible.”

“They speak very highly [of him]. All the youngsters, you speak to Joe [Willock], Reiss [Nelson], all the young guys, they’ve got nothing but great stuff to say about Freddie,” Wright said on The Kelly and Wrighty Show.

“And I’m sure that Freddie, his involvement now with the transition from the academy into the first team, is vitally important.”

“I always thought a big part of Freddie’s game as a player was his brain and his ability to pick the right options. When you play like he did, you have got to be intelligent. You have got to know the game, know what defenders are thinking,” Dixon told The Athletic.

“He was not reacting on instinct. He could work out where the gaps were going to be and the timing of the run needed. If you were that kind of footballer it would certainly suggest you have the tools to move into the coaching side.

“His image off the pitch might lead you into thinking he is off the cuff and has flamboyance, but his game was more intellectual than that. You don’t time your runs as well as he did by just running. His football intelligence will hold him in good stead in a coaching capacity.”

Where are they now? The 38 Arsenal academy players to debut in the 2010s