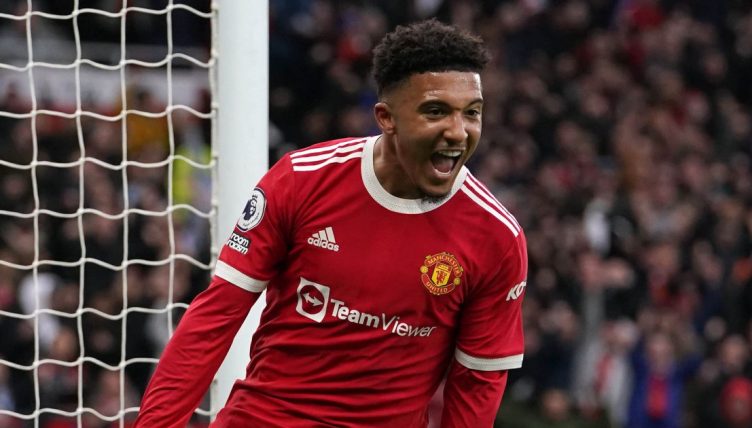 After a difficult start to life at Manchester United, Jadon Sancho has exploded into life in recent weeks and his display in Sunday’s derby against Leeds at Elland Road was perhaps his best yet.

An old-school Roses Derby played out in West Yorkshire, with rain pouring, wind swirling and firm challenges flying in left, right and centre.

It was the assist that really made it, with Sancho’s ball invitingly floated right into the path of his Portuguese team-mate, who headed low and hard in textbook fashion.

But Leeds fought back, a Rodrigo goal assisted by Storm Eunice and a Raphinha effort assisted by former United man Daniel James getting Marcelo Bielsa’s side level.

In the end, though, United had too much. Ralf Rangnick introduced Fred, who latched onto a pass from that man Sancho again to hammer home and make it 3-2.

Another substitute, Anthony Elanga, then made it comfortable for United with a calm finish two minutes from the end.

Sancho was undoubtedly the star of the show, receiving the man-of-the-match gong at full-time.

Even Roy Keane praised the 21-year-old England international, saying on Sky Sports: “He’s getting a bit of swagger back, and it’s nice to see because he was getting heavily criticised.”

Sitting next to him in the studio, Roy Keane’s former Ireland team-mate Robbie Keane added: “He was brilliant today, Sancho. The last few weeks he’s been fantastic.

“When he first came, every time he got the ball he was going backwards and playing simple passes.

“Now in the last four weeks I’ve seen him, when he gets it in one-v-one situations, he’s running at people, he’s nutmegging people.

“His numbers at Borussia Dortmund were incredible, he needs to do it now. He seems to be starting to deliver now with goals and assists.”

Here, we’ve rounded up eight stats that prove just how brilliant Sancho was against Leeds:

– Sancho made 21 passes in the final third on Sunday, the most of any player on the pitch.

– The England winger had eight touches in the opposition box, likewise the most of any man on the park.

The midfielder heads the ball down and past Meslier from Jadon Sancho's cross! pic.twitter.com/kqX3UdGrVN

– In a stat that will please the high priest of the Gegenpress in the United dugout, Sancho made nine ball recoveries, won five duels (including an aerial duel!) and made one tackle. He’s not just good on the ball.

– Sancho also made three successful dribbles against Leeds. And let’s face it, that – not the pressing – is why we tune in to watch him.

–  The two assists at Elland Road mean that it’s now four goal involvements in Sancho’s last five games after he scored against Southampton and Middlesbrough.

– Sancho made three key passes. The most of anyone on the pitch? Well, of course.

– Sancho was only dispossessed once in the entire 90 minutes, which is some going for a tricky winger.