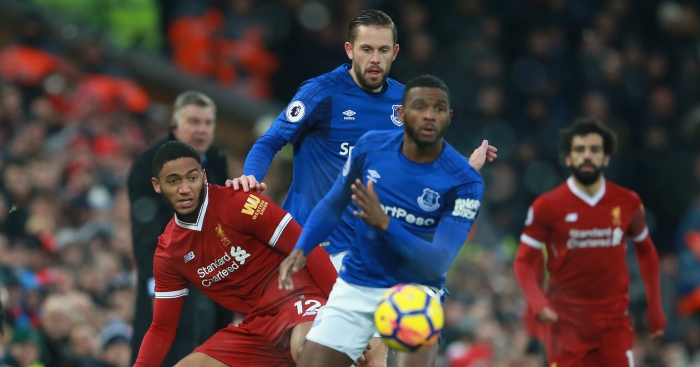 A lot of attention has been on Liverpool‘s forwards this season, but against Everton it was defender Joe Gomez who many Reds supporters were most impressed with.

The 20-year-old former Charlton youngster, who is capable of playing anywhere along the back line, was excellent at right-back, linking up brilliantly with Mohamed Salah and claiming the assist for his opening goal.

And with a perpetually frail defensive line, Gomez might just be the answer to Liverpool’s prayers if given an opportunity in his preferred central position.

Joe Gomez has gone very quietly about to become #LFC's best defender this season. Considering his year long injury, that's quite a comeback.

Gomez, who made his debut for Charlton’s under-18s aged just 13, finished the Merseyside derby with an impressive 85% pass completion rate, with the 67 completed passes including his second assist of the season.

Impressive defensively too, he was successful in all six of the tackles he attempted, more than anyone else on the pitch.

It was his 12th Premier League appearance of the season, and Liverpool have lost just one of those matches.

If an asteroid were hurtling towards the Earth, Joe Gomez would probably control it with his chest and play it down the line to Salah. pic.twitter.com/H6VYnc9lLJ

Not once in the Everton match was the new England international dribbled past, but he completed four of five attempted dribbles going in the opposite direction.

Liverpool fans have been full of praise for Gomez since the game, and some have even gone as far as earmarking him as a future captain at Anfield.

Wish we'd just accept the inevitable and give Joe Gomez the captaincy already.

I dont know how Henderson is captain of LFC.Just because you throw your weight around and shout at your fellow players doesn't make you a good captain.Joe Gomez has shown in the last couple of months how to be a leader.Body on the line,calm&composed.Vital player for LFC now.

I’d like to remind you all how immense Joe Gomez was on Sunday.

Can we take a moment to acknowledge how fantastic Joe Gomez played vs Everton. He was amazing. Proper talent

Gomez also made his Champions League bow earlier this season, coming on as a sub in their play-off against Hoffenheim.

He went on to start three group games, earning particular praise from Rio Ferdinand following the 3-3 draw against Sevilla.

"He's maturing at a great rate, he's a great prospect for English football."