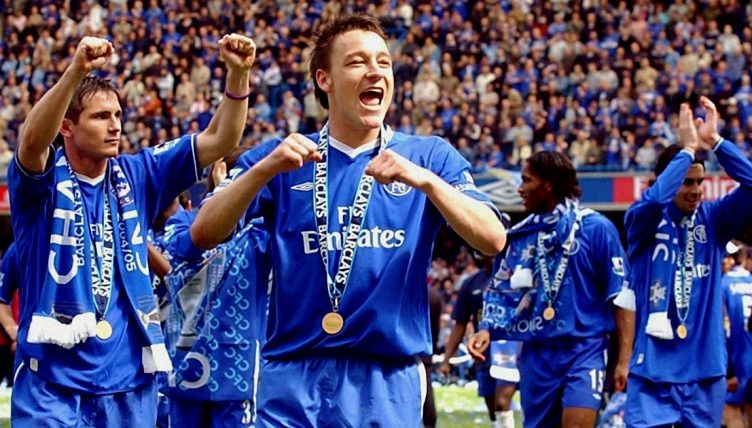 John Terry made 717 appearances for Chelsea, is their highest-scoring defender of all time and is the most successful captain in their history with 15 major honours. In short, he is a club legend.

Terry joined Chelsea as a 14-year-old in 1995 and made his first-team debut three years later, still a couple of months shy of his 18th birthday.

The centre-half started to establish himself at Stamford Bridge following the turn of the millennium and went on to lead the club through the most successful period of its history. Here are some of the highlights from his incredible journey.

Dan Petrescu was not happy. Substituted with Chelsea leading Aston Villa 4-1 in the League Cup for a 17-year-old academy graduate, the Romanian was less than impressed with manager Gianluca Vialli.

Perhaps he knew his long-term future in the Blues’ back four were numbered. His first, all the way back in October 1998, would be the first of 717 Chelsea appearances for Terry.

Terry’s first goal arrived on the 20th February, 2000, getting on the end of a Gianfranco Zola corner to head home in a 5-0 FA Cup victory over Gillingham.

A sight that Chelsea fans would become accustomed to over the next 19 years: Terry heading home from a corner before running towards the supporters with one arm aloft in a Shearer-esque celebration.

He went on to score 41 Premier League goals, a record for a defender.

Player of the Year

Chelsea won the FA Cup in 2000, though Terry was an unused substitute in the final, and it was the following season when the defender truly established himself at Stamford Bridge.

Terry made 26 appearances and was named the club’s Player of the Year, beating the likes of Marcel Desailly, Jimmy Floyd Hasselbaink and Gianfranco Zola.

A leader is born

In 2001-02, Claudio Ranieri’s first full season as manager, Terry captained the Blues for the first time in a League Cup tie against Charlton.

Later that season he would score the only goal in the FA Cup semi-final victory over Fulham, though illness would prevent him from starting in the final.

Despite the riches available to Jose Mourinho, one of the Portuguese’s first acts as Chelsea boss was to install Terry as permanent captain.

It would be the start of arguably the centre-back’s finest season, as he led Chelsea to their first title in 50 years, won the PFA Player of the Year award, and was named the Champions League’s best defender. The Blues conceded just 15 goals in 38 games, which remains a record today.

By the time the new Wembley stadium was opened in 2007, Terry was well used to success.

It was fitting that one of the dominant figures in English football wrote his name into the stadium’s record books not once but twice.

Terry scored the first England senior goal at the stadium and was also the first captain to lift the FA Cup thanks to Didier Droga’s extra-time winner against Manchester United.

Only eight clubs in the history of English football have won the title and FA Cup in the same season.

Chelsea managed it in 2009-10, with Terry making a mammoth 52 appearances in all competitions as he typically led by example.

Terry may have famously missed the 2012 Champions League final, but the Drogba-inspired victory was the crowning of Chelsea’s greatest spell of all time – of which their captain was right at the heart of.

Terry’s career has been littered with controversy, but that has sometimes masked positive stories which do not fit the often negative portrayal of professional footballers.

In April 2016, for example, Terry paid for the funeral of eight-year-old Chelsea fan Tommi Miller, who tragically died after a battle with leukaemia.

Tommi’s mother, Ruth, said: “When we visited the stadium, you could tell John Terry was really taken by him and his cheekiness, but it was still a shock when we heard.

“Tommi obviously made a big impression on him and he was one of his favourite players so it’s very special to us.”