Jordi Mboula: What you need to know about Monaco’s new wonderkid 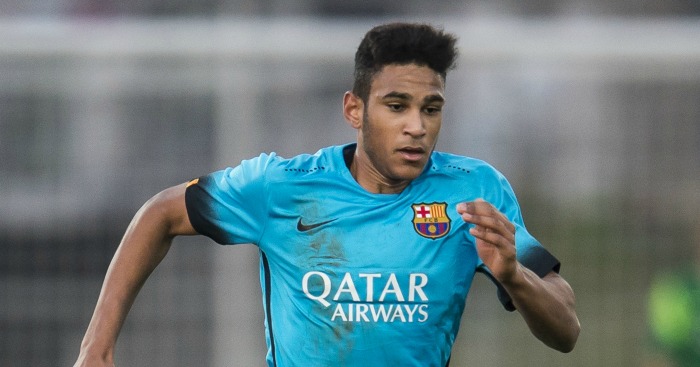 Monaco pulled off a coup on Wednesday by signing teenage prodigy Jordi Mboula on a five-year deal from Barcelona.

Mboula has been attracting plenty of attention thanks to some exciting performances for Barcelona and Spain’s youth teams, and was expected to sign a new deal at the Nou Camp.

However, the 18-year-old has instead opted to join Monaco in a £2.6million move, and will be hoping to become the latest promising youngster to emerge for the Ligue 1 champions.

If his name sounds familiar, it’s probably because you saw his stunning solo effort against Borussia Dortmund in the UEFA Youth League pop up on your social feeds earlier this year.

? @AS_Monaco announce the signing of Jordi Mboula from @FCBarcelona on a 5-year deal.

He’s the guy that did this in the @UEFAYouthLeague… pic.twitter.com/RGsYXYR3GD

Mboula, who has a Catalan mother and Congolese father, has already represented Spain at Under-17 and Under-19 level.

He joined Barcelona as a nine-year-old and was regarded as one of their most promising young players. He plays on the right wing and is known for his great pace, balance and dribbling ability, all of which was on show when he scored that amazing goal against Dortmund.

He has, of course, been likened to Lionel Messi – as well as Thierry Henry – but such comparisons, as is usually the case, are far too premature.

He is similar in many respects to Adama Traore, who also left Barça in search of a clearer path to the first team, but unlike the former Aston Villa winger, who is now at Middlesbrough, Mboula regularly has an end product to match his eye-catching work.

Monaco had already signed one of Europe’s brightest young talents after capturing Youri Tielemans from Anderlecht.

The Belgium international is much more established than Mboula, having already starred both domestically and in Europe for Anderlecht, and a host of European giants were tipped to sign the 20-year-old this summer, but Monaco are now an attractive proposition for more reasons than simply money.

Youri Tielemans was directly involved in 30 goals in 53 games across all competitions in 2016/17.

Their surprise title triumph last term was built around the success of their promising young players, and although they have already lost Bernardo Silva to Manchester City and are expected to soon sell Tiemoue Bakayoko to Chelsea, they will be hoping to add further silverware next season.

Barcelona, meanwhile, who don’t have a buyback clause inserted into Mboula’s deal, are reported to be considering a €90million move for Dortmund’s Ousmane Dembélé this summer as they look for players capable of going straight into their first team.