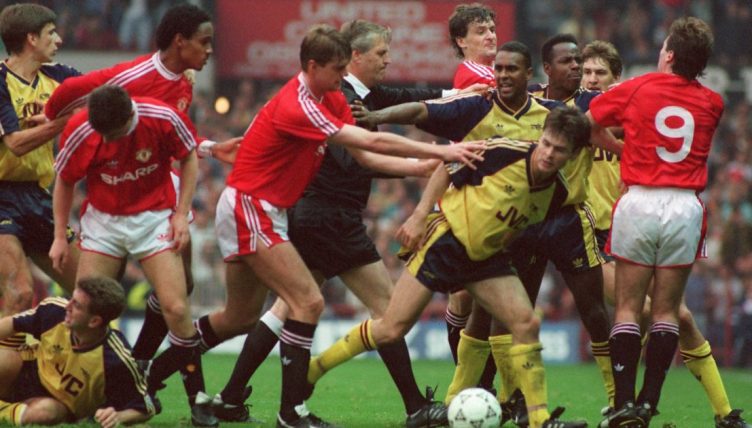 “The most stupid, appalling, disgusting and disgraceful exhibition of football, possibly in the history of the game” – David Coleman, 1962.

Before we get into this, the on-pitch, mid-game brawl is a precise science and one which we should first separate from other theatres of footballing war.

Firstly, training grounds and dressing rooms are the designated venues for ‘bust-ups’, which themselves are conveniently slippery concepts when it comes to their finer details.

Get involved in a heated disagreement in a technical area and it’s a ‘touchline row’ – do so in the tunnel and you’re dangerously close to starting a ‘fracas’.

A single drop of saliva, however, brings the ‘spit spat’ into play – a thoroughly distasteful situation that’s apparently worse than punching someone in the face. Football morality is a maze sometimes.

Should a mild bout of multi-player violence break out, there’s always the option of calling it a ‘melee’ but – especially if it’s specified how many combatants are involved – we’re usually talking about a brawl.

The total number of brawlers, even if it’s just a ballpark figure, is important, as well as measuring the distance travelled by some of them to get involved; anything more than 40 yards – ‘fully 50 yards’ should do it – is apparently just out of a player’s rightful jurisdiction.

What ‘sparks’ a brawl? A bad tackle is usually the perfect catalyst (see the Battle of Bramall Lane), but tensions can spill over merely thanks to a glaring lack of sportsmanship or grace, or merely ‘something being said’.

Let’s get down to the real nuts and bolts, though – what’s the optimum number of players for a brawl?

We’re well into the 21st century, so we can only place our blind trust in Google rather than do the painstaking research ourselves. By employing an elementary understanding of how their search algorithm works, we can get a good idea of the most common number of confirmed football brawlers.

As suspected, the 20 and 21-man brawls appear to be the most popular format – either because 1) someone’s often just been sent off to begin the unpleasantries or, more likely, 2) one or both of the goalkeepers opt to stay out of it. 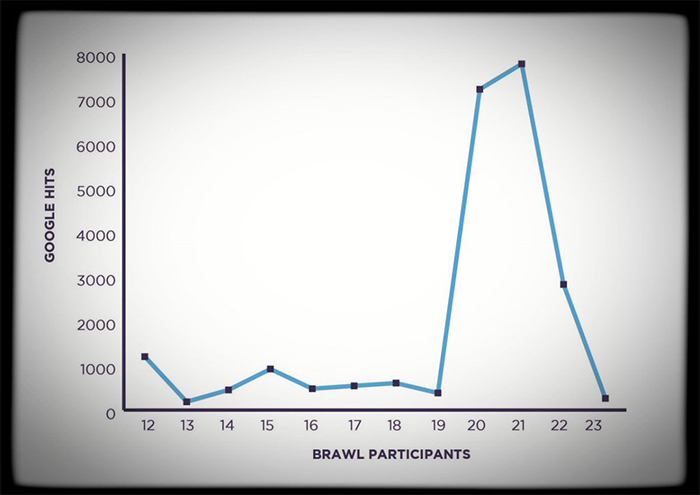 Perhaps this is in the official charter of the Goalkeepers’ Union, along with high-fiving each other when they change ends after the coin toss and not celebrating if they happen to accidentally lob their opposite number from 80 yards.

There are outliers, though. Your correspondent once witnessed a 41-man Sunday League brawl after a ball had been hoofed onto an adjacent pitch and not returned either swiftly or accurately, so one should never underestimate how quickly a brawl can spread.

While footballers have almost certainly been trying and failing to resist the temptation to slap seven bells out of each other since 1863, the evolution of the 21-man brawl as a televisual spectacle – often requiring some skilfully selective panning and zooming from the cameraman – can be traced back at least as far as 1962 and the grandly titled Battle of Santiago, the superbly violent World Cup clash between Chile and Italy.

What began as a war of words over Chilean hospitality ended with a 90-minute demonstration of the dark arts, the ‘highlights’ of which were introduced by the BBC’s David Coleman with the tone of a headmaster taking morning assembly the day after a playground fight.

Half a century on, the polished product of modern football has been starved of some sustained on-pitch free-for-alls.

Perhaps the last top-flight brawl worthy of the name had such an impact on everyone who witnessed it that both teams were deducted points – it was later granted its own dedicated Wikipedia page – while Arsenal and Manchester United remained at each other’s throats for another good 15 years afterwards.

On this day in 1990, things got a bit heated between Manchester United and Arsenal in a classic example of the 21-man brawl.

Both sides were later docked points. Two yellow cards were sufficient on the day.#MUFC #AFC pic.twitter.com/MBQXX48dbf

In the increasingly sanitised years since, 21-man brawls have tended to be the bonus material hidden away on Football League Extra or Goals on Sunday, where clubs like Chesterfield, Macclesfield or anyone with ‘field’ in their name took turns to host outpourings of third-tier masculine sporting angst.

In this low-budget mid-90s era, Chesterfield v Plymouth surely set the gold standard. It has pretty much everything:

– A sly kick to set things off.

– The camera zooming in with almost Bollywood-esque urgency as the players converge on each other.

– The ball just rolling about, forgotten, until it’s absent-mindedly brushed over the line in the mêlée.

– The breaking up of the brawl into Former Soviet Republics of the Brawl, about half a dozen well-balanced one-on-ones in the penalty area and net.

The smash-hit from 2011 between Macclesfield and Wycombe was an emphatic reboot for the 21-man brawl (the Macclesfield goalkeeper sitting it out this time) and it’s another work of art, this time as the brawl moves around like one living organism of tightly-wound aggression.

Best Supporting Artist in this one surely goes to referee James Adcock, presiding over his first Football League match, who casually saunters around the periphery of the chaos with the red card already in his hand, which he eventually waves at pretty much everyone that comes within five yards of him.

Thanks, in part, to the FA’s pesky rule E20 (a), Premier League clubs have struggled to match their lower-league counterparts in the 21-man brawl stakes.

The 2007 League Cup final descended into some moderate nonsense, with few notable protagonists but plenty of peacemakers, and prompted both Jose Mourinho and Arsene Wenger to wade in like disapproving dads.

Amid the apparent chaos of the 21-man brawl, there are crucial roles to play. The antagonists rarely manage to throw a punch, so they have to maintain the right balance between pushing opponents away and keeping hold of them by the collar, all while shouting “WHAT? WHAT?” in their face.

Goalkeepers, generally, are the NATO peacekeeping force – drafted in from fully 50 yards away to use their 6ft 5in frame and giant gloves to try and split apart the nucleus of the fuss.

As for the violence itself, footballers often instinctively resort in extreme cases to flying kicks for offensive and defensive purposes, as showcased in the vengeful Maradona vs Bilbao (1984).

The true hipsters’ choice, though, is surely Toros Neza vs Jamaica (1997), a hot, dusty mess in Toluca which began with a knee-high tackle and ended with the visitors clutching rocks and plastic chairs.

As a warm-up for their World Cup qualifier against Mexico a few days later, it wasn’t ideal: Jamaica lost that one 6-0.

Although these scenes are perhaps best left to the distinctly standard-definition confines of YouTube, the prospect of Jamie Carragher and Gary Neville picking through a proper 21-man brawl on Monday Night Football – frame-by-frame, kick-by-kick – remains a hypothetical guilty pleasure.

The Joy Of…The Elastico: From Sergio Echigo to Ronaldo & Ronaldinho