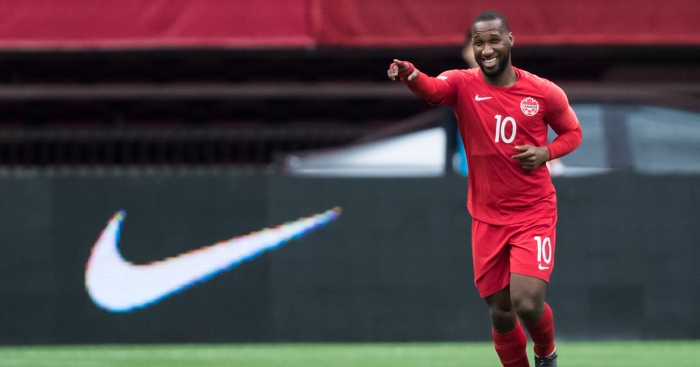 It must be quite tiring having to live up to the uber-seriousness of the Premier League week in, week out, so Junior Hoilett used his international break to have some fun with Canada.

Being embroiled in a relegation battle with Cardiff City while Neil Warnock barks into your ear doesn’t sound like the happiest of workplaces, and earlier this month there were suggestions of a ‘split’ in the Bluebirds’ camp – albeit rumours which both Hoilett and Warnock denied in the wake of their victory over West Ham.

Even so, a chance for Hoilett to freshen up his surroundings away from the pressures of scrambling out of the relegation zone was probably welcome.

It’s now been a decade since the forward made his Premier League debut for Blackburn Rovers, quickly becoming a hot prospect who was linked with moves to Arsenal, Tottenham, Liverpool and Bayern Munich.

But it took until 2015 before the Ontario-born attacker committed his international allegiance to Canada, having also been eligible for Jamaica and expressing an interest in representing England.

While he has just 21 caps to his name, as the only Premier League player in the Canada squad, Hoilett is considered a senior member of the side and is expected to lead a young group of players featuring Bayern Munich sensation Alphonso Davies.

Canada boss John Herdman recently praised Hoilett for going “in deep” with the squad and “driving the culture” within the set-up, while the 28-year-old described himself as a “veteran”.

And so what did he do with qualification for the Concacaf Nations League and 2019 Gold Cup on the line against French Guiana at the weekend? He completely took the piss, that’s what he did.

While there are obvious echoes to Dean Saunders’ goal for Sheffield United against Port Vale in throwing the ball against another player as an improvised one-two, Saunders did so against goalkeeper Paul Musselwhite knowing there was nobody else between himself and the net.

Hoilett, on the other hand, can see two banks of four and a covering No.10 plus a goalkeeper in his way. With 10 minutes on the clock and Canada still level against a side unranked by FIFA, it’s as clear a ‘f*ck this’ you’re ever likely to see on a football field.

In the build-up to the fixture, Hoilett, presumably trying to keep a straight face, told Har Journalist, “It’s not going to walk in the park,” before proceeding to score the kind of goal only a giddy schoolkid in a playground would attempt.

It’s worth remembering that football sometimes is a walk in the park. Hoilett’s unique brand of leadership could be to remind everyone of that.