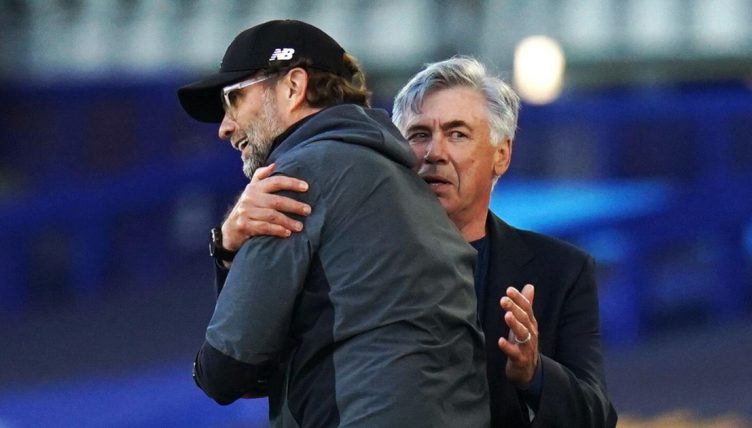 Jurgen Klopp and Carlo Ancelotti have led their Liverpool and Real Madrid to the Champions League final where they will battle it out for club football’s greatest trophy. But how do their records in finals compare?

Both are highly successful managers with huge trophy cabinets, yet they’ll be hungry to add another to their collection with a victory in the 2022 Champions League Final.

So far this season Klopp has won both the League Cup and FA Cup with his Liverpool side and is seeking a third cup final victory in 2021-22 alone.

Ancelotti, meanwhile, has already won the Spanish Supercup. He also managed his side to the La Liga title, which saw him become the first man in history to win all five of Europe’s top major leagues.

Both managers have been extremely complimentary of each other heading into the highly anticipated final.

“The respect for him from my side couldn’t be bigger,” Klopp said of the Italian manager. “He is incredible, he is pure experience and very, very, very successful.

“He won everything everywhere and will never stop and I really respect that, but that doesn’t mean anything for this particular game.”

Ancelotti gave a similarly glowing reference on Klopp and Liverpool.

“Two great teams will face each other, and the one with more courage and personality will win at the end,” he said. “[Liverpool have] a lot of quality together, with high intensity and good organisation. They’re one of the best teams.

“I have a good relationship with him [Klopp]. A great coach who brought some new things to football with the intensity and offensive pressure. He’s doing a great job.”

The two have also faced each other a number of times, first crossing paths in the Champions League when Ancelotti was in his first stint as Real Madrid boss and Klopp was in charge of Borussia Dortmund.

Notably, Ancelotti managed Liverpool’s bitter rivals, Everton, for two seasons before returning to Madrid, but not before giving the Toffees their first win at Anfield since 1999.

Yet how do their records in finals compare? We’ve gone through the history books to find out.

Note: We’ve not included Ancelotti’s loss in the 1999 Serie A European play-off with Juventus nor their victory in the 1999 Intertoto Cup.

It’s the 93rd minute in the #UCLfinal, Real Madrid are trailing 0-1 to Atletico, La Decima seemingly out of their grasp…

Up steps Sergio Ramos and they then go on to win their 10th #UCL crown! 🏆 pic.twitter.com/yLdhfK3Qa9