Everything you need to know about Jurrien Timber: ‘Better than De Ligt’ 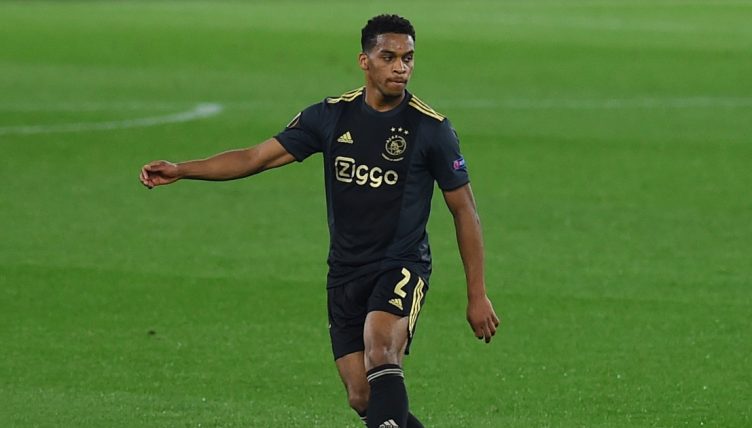 After becoming the leading candidate for the Manchester United managerial position, Erik ten Hag is reportedly looking to bring some of his Ajax players to Old Trafford.

According to reports in the Netherlands, Ten Hag will try and sign Jurrien Timber if he is appointed as United’s next manager.

Here, we bring you the lowdown on Timber, who has also been linked with a move to Pep Guardiola’s Manchester City.

Born in Utrecht in June 2001, Jurrien and his twin brother Quinten started playing football with their local amateur club DVSU in 2006. They then had six-year spells at Feyenoord before joining Ajax’s academy in 2014.

The duo worked their way up through the ranks before representing Jong Ajax in the second tier of Dutch football, where Jurrien reportedly stood out owing to his leadership qualities.

While Quinten never played for Ajax’s first team, Jurrien was chosen by Ten Hag to make his first-team debut in a crucial clash against Heerenveen in March 2020.

He helped Ajax to a 3-1 win and then established himself as a first-team regular in 2020-21, making 30 appearances in all competitions as they won the Eredivisie title and KNVB Cup.

The 20-year-old was named in Frank De Boer’s Netherlands squad for Euro 2020 and has since made six international appearances, including three at the tournament.

Timber has enjoyed another brilliant season in 2021-22 and was one of the nominees in the running for the 2021 Golden Boy award.

🚨🇳🇱| Erik ten Hag has sounded out Jurrien Timber as an important transfer to take with him to Manchester United.

Big talent at 20 years old which would be perfect for Manchester United. pic.twitter.com/zhA4a7aKeM

Where does Timber play?

While his brother is a midfielder, Jurrien mainly plays as a centre-back in a back four and can also deputise at right-back if needed.

Having come through Ajax’s academy, Timber is very comfortable in possession and likes to carry the ball into the opposition half.

The Netherlands international is renowned for great positioning and ability to read the game well, but he is also an aggressive defender that is strong in the tackle against opposition forwards.

United already have five centre-backs at the club but Eric Bailly and Phil Jones look set to leave and Harry Maguire has been heavily criticised throughout 2021-22.

This is just an incredible goal that sums up everything you need to know about Jurrien Timber.

Great, aggressive defender and then calm, cool, and collected on the ball. Beautiful. pic.twitter.com/1ttz7y8ksw

What has Timber said?

– “I like to play for prizes; that’s why I say [Manchester] City now,” Timber recently told Helden Magazine when asked if he’d prefer to sign to Barcelona or City. “Barcelona has a less good period at the moment.

“I want to grow as a player, use my time at Ajax to become even better. At Ajax, you have to be happy if you are in the starting line-up; that’s why I want to enjoy this time consciously.

“I play for the prizes here; there is no better place to be. Ajax was always my dream club; I also slept under an Ajax duvet. I plan to stay here for a while. But if Manchester City calls, what should I do?”

What have they said about Timber?

– “With Jurrien Timber, Devyne Rensch, and Ryan Gravenberch, the next generation of top talent has joined the main group,” Ten Hag told Bild in 2021. “At Ajax, we have one of the best youth training programs in the world.”

– “He could even play at left-back or in central midfield,” Ten Hag told Ajax TV in 2020. “He will not immediately be the leader of the Ajax first team, but he dares to speak out immediately and has not been shy in the dressing room. Those are important qualities to get far.”

– “You know who I really liked? Timber,” Marco van Basten said after Ajax’s 5-1 win over Sporting. “He had balls that you normally don’t see with a defender, but I also thought he was good in defensive terms.

“He is reliable in the defensive part, but he is also so comfortable on the ball. Look, as a midfielder or attacker, you just want that ball quickly. And he really goes straight forward.

“He conquers the ball and immediately gives deep passes and that is why things are moving in the right direction so quickly.”

The former striker added: “He takes a lot of initiative and immediately looks ahead to play a midfielder or striker.”

– “I will not be afraid to field him,” former Netherlands boss Frank de Boer said after Timber made his second international appearance. “He doesn’t blink or blush. It looked like he was playing his 30th international match.

“Of course, I had heard that he is a great talent, but I did not expect him to adapt so quickly. First at Ajax and now at Oranje.”

“He dominates and has peace on the ball. It is unprecedented. But would he, because he is 1.78 metres tall, also be able to play in the Premier League against [Romelu] Lukaku or another top striker?

“Will clubs go for that? It depends what kind of club you go to. I think he can join Manchester City like that. There he plays with a lot of space at his back.”

– “He is only 20 years old and is undergoing a stormy development,” Ron Vlaar recently told De Telegraaf. “He has almost 70 matches in Ajax to his name and played in the Champions League. It’s nice to see such a young player appear so confident.”

– “At the moment I would say that Timber is better centrally than [Matthijs] de Ligt,” journalist Valentijn Driessen said in De Telegraaf’s football podcast earlier this season.

– “I don’t think so, because Matthijs de Ligt has done a great job at Ajax, especially in that last season,” journalist Mike Verweij said in response to Driessen’s comments. “But I think Timber is well on its way to becoming at least as good and maybe even better.”