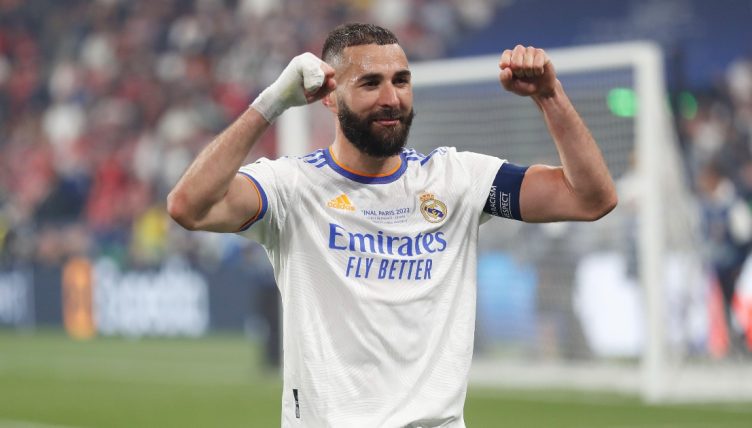 Real Madrid’s Karim Benzema has enjoyed a sensational 12 months and is now the overwhelming favourite to win the Ballon d’Or.

After winning the UEFA Nations League with France last October, Benzema then added another Supercopa de Espana, La Liga and Champions League to his CV last season. The striker played an integral role in that success and was in the best goalscoring form of his career throughout the 2021-22 season.

And it doesn’t look like the 34-year-old has plans to slow down any time soon; despite some injury problems, he’s kicked off the 2022-23 campaign three goals in five matches for the European champions.

He looks set to win the Ballon d’Or, which will be decided today. He’s the odds-on favourite and rightly so.

“I think the good players, the great players, rise to these occasions,” Owen Hargreaves said on BT Sport following his Super Cup display against Eintracht Frankfurt in August.

“When you think back to the history of Real Madrid, Zidane with that outstanding goal against Leverkusen, Benzema has produced whenever they’ve needed him to have a big moment.”

And we’ve rounded up 14 remarkable stats from the 34-year-old’s quite frankly batsh*t year.

– Benzema registered 44 goals and 15 assists in 46 appearances in all competitions for Madrid in 2021-22 and averaged a direct goal contribution every 66.42 minutes.

Of course Karim Benzema gets in on the goals! 🔥

– The France international finished as the top scorer in La Liga, nine ahead of second-placed Iago Aspas. He was also second on the assists chart after Ousmane Dembele.

– He scored 15 goals in the Champions League in 2021-22, the joint-third most in any single-season Champions League campaign.
– Benzema scored more Champions League goals than 23 of the teams who qualified for the competition this season, including Juventus, Manchester United, Barcelona, Atletico Madrid, Inter and Borussia Dortmund.

– He also got two assists in the Champions League in 2021-22 and averaged a direct goal contribution in the competition every 65 minutes.

– The 34-year-old scored 10 goals in the Champions League knockout stages in 2021-22, the joint-most by a player in a single campaign along with Cristiano Ronaldo in 2016-17.

This game really has it all! It's now 4-3! #UCL pic.twitter.com/TMkdfmveuC

– He became only the fourth player to score in both legs of the quarter-final and semi-final in a single Champions League campaign after Fernando Morientes, Neymar and Edin Dzeko.

– Benzema became just the second player to score consecutive Champions League hat-tricks in the knockout stage – the other was Ronaldo, who bagged three against Bayern Munich and Atletico Madrid in 2017.

– The striker’s goal against Eintracht Frankfurt moves him ahead of Raul as Los Blancos’ second all-time top scorer behind Ronaldo. He’s surpassed Raul’s goal tally in 135 fewer appearances for the club.

– Benzema also got six goals and an assist in 10 France games in 2021-22, including the equaliser against Spain in their UEFA Nations League final win.

READ MORE: Ranking the top 10 best football players in the world since 2017