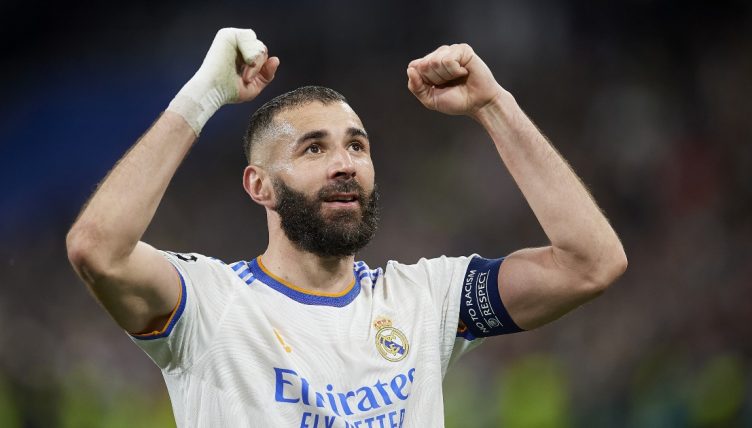 Karim Benzema’s hat-trick in the Champions League first-leg over Chelsea has Real Madrid with one foot in the semi-finals after an impressive 3-1 victory at Stamford Bridge.

The France international helped inspire Carlo Ancelotti’s side to a comfortable triumph against their Premier League opponents with Madrid now strong favourites to progress into the last four.

Benzema just seems to be getting better and better season-on-season and his scintillating performance on away turf was the difference between the two European powerhouses.

The 34-year-old fired Los Blancos into an early two-goal lead, beating Edouard Mendy with two excellent headed finishes – the first a bullet header from Vinicius Junior’s cross and the second a cultured glance into the bottom corner from close range.

Chelsea upped their game before the break and were rewarded when Kai Havertz halved the deficit on the brink of halftime.

After chasing down what appeared a lost cause just seconds after the restart, Benzema was rewarded for his admirable work rate, capitalising on a slack Mendy pass before slotting into an empty net to complete a wonderful hat-trick.

Benzema was replaced in the latter stages – Ancelotti likely keeping him sharp for next week’s return leg – as Madrid cruised to a memorable Champions League win against the competition’s reigning champions.

“Benzema is the best No.9 in the world,” Thibaut Courtois said post-match. “It’s a shame that I couldn’t stop their goal as the ball hit my palm, but it’s a good victory in difficult circumstances. The tie isn’t over, we have to win at home.”

Here are 10 of the most impressive stats and records from Benzema’s match-winning hat-trick performance in west London.

– Benzema has now scored 37 goals in 36 matches for Real Madrid in the 2021-22 season – over double the amount of Vinicius Junior who is their second top scorer.

– The striker has become the first player ever to score a Champions League hat-trick against Chelsea.

– Benzema and Vinicius have combined for five Champions League goals this season; a tally more than any other duo in the competition this term. Not bad considering the former Lyon man was caught telling team-mate Ferland Mendy not to pass to the Brazil international during a Madrid game in October 2020.

He had no right to score that! Ridiculous header 💥#UCL pic.twitter.com/jWtW2l1kcZ

– Of Benzema’s 82 goals in the competition, only one has been a penalty.

– The 34-year-old has become the first French player to reach 10+ goals in a single campaign in the Champions League.

– Benzema is now one of only two players to score consecutive Champions League hat-tricks in the knockout stage – the other was Ronaldo in 2017 who bagged three against Bayern Munich and Atletico Madrid.

– For the first time in his career, the striker has now been involved in 50 goals in one season, registering 37 goals and 13 assists.

– He is now level with Liverpool’s Sadio Mane (13) for the most goals scored in the Champions League knockout stages since the 2017-18 season.