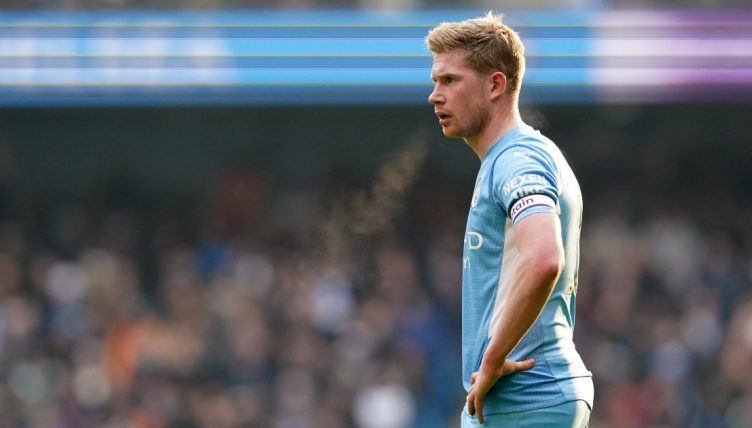 De Bruyne put United to the sword, scoring two and providing another as City restored their six-point lead at the top of the Premier League table.

After scoring a brace in a helter-skelter first half, the Belgium international turned provider in the second, teeing up Riyad Mahrez for a magnificent volley that killed the game off. He was given a standing ovation from the City supporters when he was substituted with 10 minutes to go.

There may have been frustration at not becoming the first Blue to score a derby hat-trick since Francis Lee in 1970 but it was a stupendous performance that effectively won the match for Guardiola’s side.

Speaking to Sky Sports afterwards, he said: “It’s winning game by game. They put the pressure on us – we responded in a good way.

“We always play the way we need to play. Sometimes we don’t get the result but we always play our football. And we will fight for it until the end of the season.”

– De Bruyne is the first Man City player to score twice in a Premier League Manchester derby since Sergio Aguero in 2015.

– The Belgium international had a higher xG (0.77) than Manchester United (0.58) in the first half. Talk about derby dominance…

– City’s midfield talisman had more shots (6) than the entire United side during his time on the pitch.

Kevin De Bruyne has no doubts that the result reflects the performance on Manchester City pic.twitter.com/MEBj1WepgA

– He also registered more shots on target (4 vs 2) and created more chances for team-mates (5 vs 2) than the United XI. Rangnick’s face would have been as red as the United shirt.

– De Bruyne has been directly involved in 88 goals in his 100 Premier League home appearances for City and Chelsea combined (37 goals, 51 assists). The man is a goal and assist machine.

– His status as City’s danger man was underlined by the three fouls De Bruyne received during the match – the most of any player on the Etihad pitch.

– And De Bruyne completed 38 of his 41 attempted passes, while his 64 touches (including six in the opposition box) underlined the dominance of his performance.