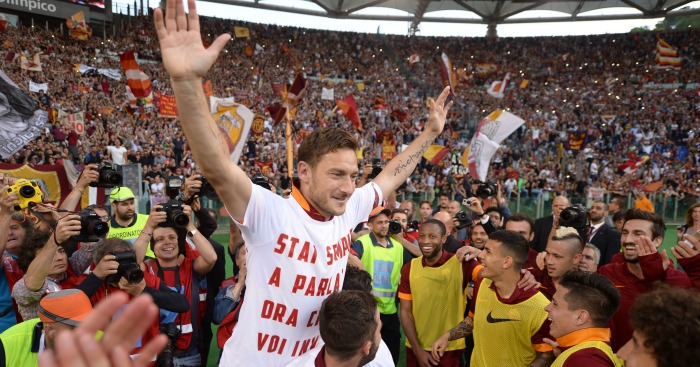 On March 28, 1993, Francesco Totti made his senior debut for Roma. Twenty-four years and 786 appearances later, he was still there. He is the undisputed King of Rome.

Totti only ever won Serie A once during his quarter of a century with the club, but it hardly matters. He’ll still be remembered as one of the greatest footballers of his era – and undoubtedly one of the most popular.

But rather than attempt to sum up his brilliance ourselves, we’ve collected some of the best tributes to a true icon.

“The reason I’ve got so much respect for him is because he’s got all the pressure on his shoulders in Rome. He’s the king of Rome.”

“Totti has a genius in him that I don’t see in other players. Not even Zizou has the same kind of intuition.”

“Francesco is an immortal player.”

“For those of us who love football, seeing him on the pitch is always a pleasure.”

“I’ve spoke about Francesco so many times I think I’m falling in love with him – my wife is quite jealous.”

“Totti has fought so much and has won each challenge. He has given everything, putting in love on and off the pitch. For all that he has achieved, he deserves all this satisfaction. He merits all the applause.”

“It would be easier to move the Colosseum out of Rome.”

“The God of Rome. I’ve never seen anything like it. As a football player he’s not quick and he’s 38-years old now but he has his technique and ambition, and a touch that’s God’s gift.”

“It seems as if when he was born, the heavenly father said: ‘Go down there and play football and that’s it.’ And he did what he was prescribed to do.”

“Roma with or without Totti is not the same team. If he is not there, there is no light.”

“He is the equivalent to the Pope. People are devoted to him.”

“Every player has some genius, but there’s only one Van Gogh, and there is nobody like Totti.”

Where are they now? The Roma starting XI from Francesco Totti’s debut

19 of the most awkward football photos of all time: Totti Klopp, Rooney…