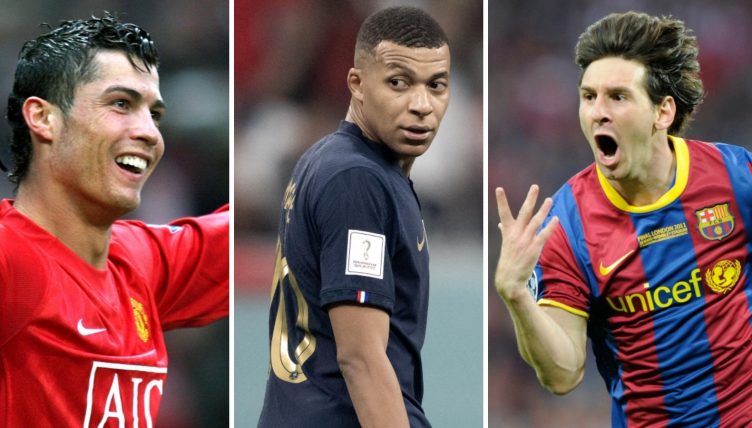 Lionel Messi and Cristiano Ronaldo have defined an era, but it’s not unthinkable that Mbappe may one day surpass them. His goals and assists numbers are actually better than theirs were at the same age.

The French striker burst onto the scene as a fresh-faced 17-year-old during Monaco’s 2016-17 campaign. He shone as they reached the Champions League semi-finals as they upset the odds to beat PSG to the Ligue 1 title.

When he was just 18, in the summer of 2017, he moved to PSG from Monaco for €180million – a world-record fee for a teenager. Now into his sixth season at the Parc des Princes, he’s close to surpassing Edinson Cavani as PSG’s all-time top scorer, having helped deliver four French titles, and a further seven domestic cups.

It’s surely only a matter of time, but the Champions League still evades Mbappe, as does the Ballon d’Or.

As well as becoming a superstar for his club, Mbappe has also shone on the international stage. He scored in the World Cup final as France lifted the most prestigious prize in football at Russia 2018, and went on to add the Nations League in 2021. Les Bleus came agonisingly close to retaining their World Cup crown at Qatar 2022, but they finished runners-up to Argentina, despite Mbappe’s hat-trick in the final.

“Every year I wondered who would win the Ballon d’Or, Messi or Cristiano. Who do I prefer? It’s like choosing between your father or your mother, you can’t,” Mbappe said in the summer (via GOAL).

“The Ballon d’Or is inevitably associated with the battle between Leo and Cristiano. Digging really deep into my memory. They have shared the prize for so long. Every year, like everyone else, I wondered which one of them would get it. Looking back, that battle was pretty crazy.

“On ceremony days, it was fun to watch them when they were next to each other. And trying to figure out from their faces which one looked more angry or upset because they knew they didn’t win.”

It will be interesting to consider where Mbappe goes from here.

Messi turned 24 in the summer of 2011. At that point he’d already won the Champions League three times and had pretty much sealed a third Ballon d’Or. It was at that stage in his career when his numbers went truly stratospheric, scoring a record 50 La Liga goals (73 in all competitions) as a 24-year-old in the 2011-12 season.

Ronaldo, believe it or not, was still at Manchester United when he celebrated his 24th birthday. At that stage he’d won everything there was to win in England, as well as a first Champions League.

When he turned 24 in February 2009, he was on his way to helping deliver a third straight Premier League title for United, but seemingly had his sights set on the Bernabeu – an £80million move was sealed in the summer, and he went on to lift a further four Champions Leagues at Real Madrid, becoming their all-time top goalscorer.

Here’s how Mbappe’s record, as of his 24th birthday, compares with Messi’s and Ronaldo’s at the same age.

The goal has been voted the third best in Barcelona's history 👏 pic.twitter.com/ruyUezQsPe

READ NEXT: The 10 most followed footballers on Instagram in 2022: Ronaldo, Messi…