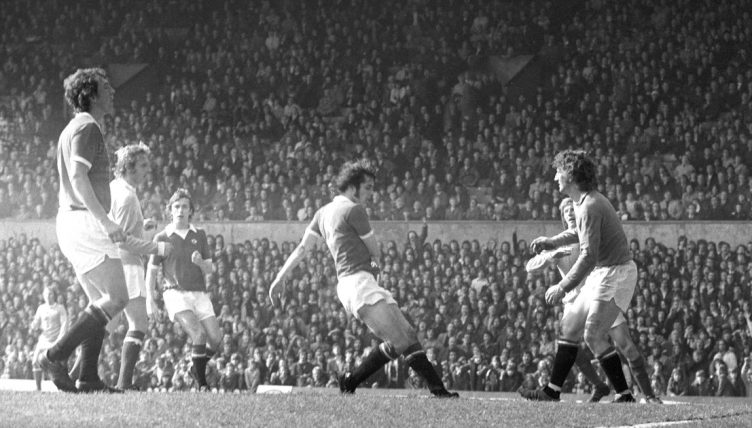 For many clubs dining at the top table, fighting for titles season-on-season, the prospect of relegation is the last thing on their mind. But when you go back in history, every single side that’s played in the top division in England has suffered relegation.

As the Guardian pointed out, the last time Everton suffered relegation ‘English roads had no zebra crossings, English cities had no tower blocks, nobody had ever been to space and the Beatles had not yet been formed’.

But there’s a very real chance Everton will slip out of the Premier League in May after a shocking 2021-22 season.

It seems remote that any of the self-styled ‘Big Six’ will suffer the same fate when taking into account their vast turnovers – but they’ve all succumbed to relegation in the past.

We’ve identified the last time the Toffees were relegated from England’s top flight and compared it to the current ‘Big Six’.

One of the many myths of Arsenal’s history is that the club has never been relegated – this is not so. Even worse is that when they were relegated it was with one of the worst records ever.

The fateful day when Arsenal were relegated was 12 April 1913. Prior to this date, they had been hanging on by the skin of their teeth, mainly because Chelsea were having a pretty poor season as well.

But the side known as Woolwich Arsenal were relegated in bottom place after a 2-1 defeat at Derby.

If there was a positive to be gained from the loss against Derby it was that they weren’t sent down due to the result of the following game – a 1-1 draw at White Hart Lane.

Arsenal, using some pretty underhand tactics, were promoted after the First World War at the expense of Spurs and have never relinquished their top-flight spot since.

The Toffees are England’s second-longest serving top-flight side – their last relegation came in the 1950-51 campaign. Their demotion was sealed with a thumping 6-0 defeat at Sheffield Wednesday and it took until 1954 for Everton to gain promotion.

However, they’ve have flirted with the drop on occasion since the PL’s formation. Gareth Farrelly’s goal at Goodison Park against Coventry City on the last day of 1997-98 season ensured the Blues stayed up on goal difference.

And the 3-2 victory over Wimbledon in 1994, which sent Sheffield United down in their place, is still raved about by the blue half of Liverpool.

Their top division status is under significant threat once more 24 years on. Frank Lampard currently has the task of preventing what would be a surprise descent to the Championship.

But a much-needed win over Newcastle United has slightly eased fears on Merseyside and Everton will feel survival remains in their own hands.

It took eight years for the Reds to return, after a certain Bill Shankly arrived from Huddersfield Town to rescue the club from the doldrums. It’s safe to say Liverpool haven’t looked back since.

The Reds have tended to be battling out in the upper echelons of the Premier League – particularly under Jurgen Klopp in recent times.

Whilst relegation has never really been a realistic possibility in the PL era at Anfield, neutrals found themselves rooting for Roy Hodgson as he dragged Liverpool towards the relegation zone in 2010-11.

The current Watford manager’s ill-fated spell in charge of the club ended with Liverpool hovering around the bottom of the table in January. Club legend Sir Kenny Dalglish rescued a perilous situation and guided the club to sixth.

United have been part of the top table since the 1975-76 season when they immediately rebounded from relegation in the previous campaign.

Their season in the Second Division is fondly remembered by the United faithful as a young team based around the likes of Sammy McIlory, Lou Macari and Stuart Pearson swept to promotion.

It’s unlikely that police forces across Britain remember United’s stint in the second tier with the same affection; United’s away games were a magnet for hooliganism.

In truth, the Red Devils dominated the Premier League under Sir Alex Ferguson racking up 13 league titles during his trophy-laden reign. Despite fortunes being on a seemingly endless slide at Old Trafford, relegation has never been on the cards (yet).

#OnThisDay in 1974, Denis Law relegated @ManUtd with a backheel goal:pic.twitter.com/svAF1VcPWj

Spurs’ last relegation came in 1977 – a drastic fall from grace following the club’s successes throughout the 1960s – and was considered a huge shock at the time.

Like Manchester United, Spurs bounced straight back up (albeit finishing third in the Second Division). This was followed by the stunning signings of Osvaldo Ardiles and Ricky Villa in 1978 and the club have remained a top-flight presence ever since.

The north London side’s lowest Premier League finish came under Osvaldo Ardiles in the 1993-94 season. The former Argentina international guided Spurs to an underwhelming 15th place finish, partly due to his pioneering 1-0-9 formation.

He was sacked in October 1994 with Tottenham languishing in the bottom half of the Premier League. Not even the best efforts of Juande Ramos, who acquired fewer points than a samosa before Bonfire Night in 2008, could jeopardise Spurs’ Premier League status for long.

Chelsea were last relegated in the 1987-88 campaign after losing a relegation play-off tie against Middlesborough. They returned to the First Division after a single season away.

From the moment Roman Abramovich took over the ownership of the club in 2003, the bottomless pit of money he invested into the playing staff reaped its rewards as Chelsea quickly turned into one of the best teams in the Premier League.

The only time relegation looked a remote possibility was Jose Mourinho’s final months of his second spell in charge. With Eden Hazard deciding to take a gap year, and Mourinho salting the earth with other squad members, Chelsea were 16th in December before he was sacked.

Although, with the club’s assets currently frozen by the UK government, anything could happen.

City have been relegated twice in the Premier League era. The first occasion, in 1996, was mainly remembered for a misguided attempt to waste time during their final match against Liverpool in the belief results elsewhere were in their favour.

They weren’t. City would drop into the third tier in 1998 before achieving successive promotions under Joe Royle.

But the 2000-01 campaign was an underwhelming one at Maine Road. Expectations were high after the signings of Paolo Wanchope and George Weah but City were thrashed 4-0 by fellow promotees Charlton in their opening game.

“It was a funny season,” left-back Danny Granville recalled. “Your forward line has Wanchope and George Weah you’d think wow but for whatever reason the chemistry just didn’t happen.

“Alfie Haaland came in as captain and I don’t really know what happened but just maybe the chemistry of the side at that time there was a lot of chopping and changing. That can happen.”

Relegation was confirmed after defeat at Ipswich in May 2001 and Royle was sacked. His replacement, Kevin Keegan, led City to the Division One title in his first season and the club have barely looked back since.