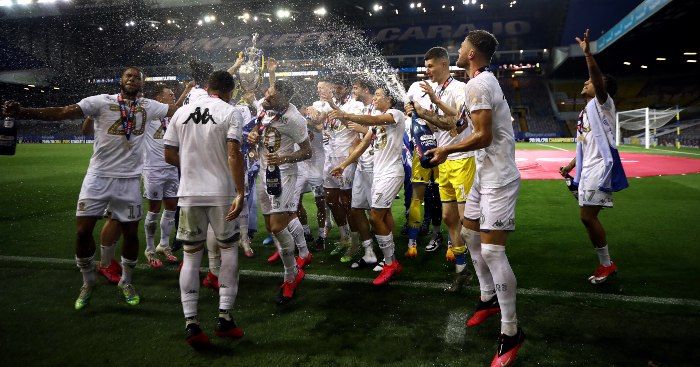 Batten down the hatches. Hide away all valuable items. Do not venture outside. Dirty Leeds are back in the big time, and boy are they ready to let you know it.

After 16 long years, Leeds United’s Football League odyssey is finally over. On Saturday, they will travel to Anfield to face reigning Premier League champions Liverpool in the Peacocks’ first top-flight fixture since they ended their relegation season of 2003-04 with a 1-0 defeat at Chelsea.

Over the course of the 21st century, the club has become synonymous with the term ‘doing a Leeds’, a one-size-fits-all phrase that encompasses their financial implosion following defeat in the Champions League semi-finals all the way through to Hereford, Histon and fucking Hockaday.

But when does ‘doing a Leeds’ start and end? In England we love to build people up to knock them down, but then what about when they come back for more? Have we even seen what the end of ‘doing a Leeds’ looks like?

Enter Marcelo Bielsa, a misunderstood maverick guided by only his moral compass, tailor-made to save a city from the chancers and charlatans that came before him.

With the release of their new mini-documentary Fucked By Ridsdale, Found By Bielsa | We Are Leeds, COPA90 and SevenTwo Films have somehow managed to chart the story of Leeds United’s last 20 years, as told by the fans who lived every moment, including the Burley Banksy and Planet Football deputy editor Rob Conlon (don’t let the latter put you off).

Absence makes the heart grow fonder and, whisper it quietly, there is even a sense of happiness from football fans that Leeds are back in the Premier League.

But let’s face it, nobody really wants it that way. People like to hate Leeds, and Leeds like to be hated. Watch the doc and get the pleasantries out of the way. Done? Altogether now: “Leeeeeds, Leeds are falling apart again.”