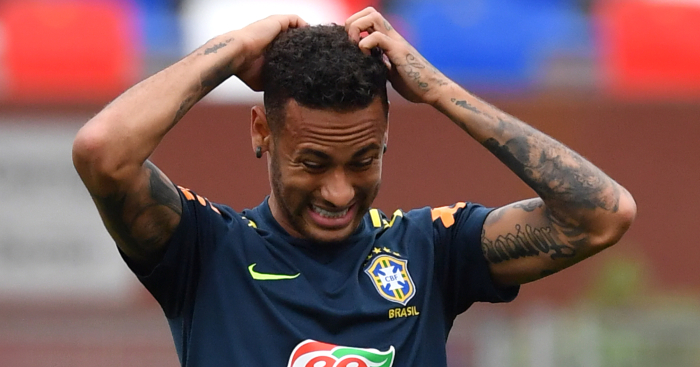 Everyone on the planet is watching the World Cup. It’s what makes the tournament such a rare and compelling spectacle, and it’s also what ensures that the World Cup will always be the premier event in football — no matter how much money goes into the domestic game.

But that huge global audience also comes with a downside: opportunistic companies pay silly money to have their brands associated with the World Cup, while vaguely football-ish adverts flood the airwaves.

Every few minutes we are presented with the official cars, watches and soft drinks of the 2018 World Cup in Russia.

It goes without saying that this hyper-commercialisation of the World Cup can be frustrating, but — in a strange way — the most opportunistic commercial endeavours of the tournament can also be deliciously satisfying.

Satisfying because, when the public points out how offended or irritated they are with these exploitative campaigns, the companies end up scoring a massive PR own goal.

In fact, the 2018 World Cup has provided some of the most breathtakingly stupid marketing campaigns we have ever seen, from questionable fast food promotions to the gamification of starving children.

Here are the biggest corporate blunders of the World Cup so far.

One of the most scarcely believable business decisions of the World Cup came straight from the fatherland, where Burger King Russia came up with an ill-advised marketing gimmick during the group stages.

A Burger King social media post offered Russian women 3 million roubles (£36,000) and a lifetime supply of Whoppers if they managed to get impregnated by a World Cup footballer.

“Burger King, within the framework of social responsibility, has appointed a reward for girls who get pregnant from the stars of world football,” the post said.

“Each will receive 3 million rubles and a lifetime supply of Whoppers. For these girls, it will be possible to get the best football genes, and will lay down the success of the Russian national team on several generations ahead. Forward! We believe in you!”

Because it’s definitely “genes” helping the Russians run around so much.

Following the predictable backlash, Burger King removed the post and issued an apology for the “clearly offensive promotion” that did not reflect its “values”.

Mastercard will only feed starving children if Messi & Neymar score

While the Burger King promotion was probably meant to be darkly humorous, Mastercard’s mind-numbingly sincere attempt at philanthropy was actually much more offensive.

The credit card giant attempted to raise its profile at the World Cup by offering to donate 10,000 meals to starving children – but only when Lionel Messi or Neymar scored a goal.

“I’m happy I can help make sure that children in the region can have a plate of food and more hope,” Neymar said. “Latin Americans know we can do great things when we come together, and this is an example of that.”

Others were less impressed, criticising Mastercard for adding a competitive element to the life and death of impoverished children.

Budweiser offers beer-branded trophy to Muslim man of the match

Egypt were desperately unlucky to lose their opening match of the tournament after keeping Uruguay at bay for 89 minutes.

Their resilience was in large part thanks to 29-year-old goalkeeper Mohamed El-Shenawy, who was honoured with the Man of the Match award for his troubles.

Unfortunately, Man of the Match sponsor Budweiser has chosen to decorate its red trophy with the word ‘Bud’, and El-Shanawy — a muslim — had no interest in collecting the beer-branded award.

The keeper did, however, pose for photos.

Budweiser will remove the beer bottle for all muslim players in the World Cup henceforth after Egypt keeper Mohamed El-Shenawy and Moroccan Amine Harit declined to accept MOTM because of his Islamic faith that prohibits alcohol. pic.twitter.com/xjKlbsJTaO

Everything about Hyundai’s big-budget World Cup advert is horrible. A horrible band, a horrible Bob Marley cover, a horrible concept.

“As a proud sponsor of the 2018 FIFA World Cup Russia, Hyundai is heating things up with Maroon 5 to kick-start 5 weeks of celebration around the World Cup — starting with Three Little Birds and a lot of good vibes.”

What? Look, Hyundai, you can’t just tap into footballing culture by referencing three [animal x]. It’s a lot more complex than that.

The advert also has very little to do with football, and sees Maroon 5 soundtracking a series of events in which a child attempts to exit a car in front of a speeding lorry, only for the Hyundai’s safety lock to kick in at the crucial moment.

Director Joseph Kahn said: “I’m very excited about telling a story with Maroon 5 because my personal favourite types of videos are performances integrated into a storyline.

“This commercial is a commercial, but it has a musical component to it and a performance element that ties together in a very complex jigsaw puzzle. And jigsaw puzzles are my thing.”

Alright, so Twitter-savvy author Paul Cude isn’t a corporation, but his willingness to exploit World Cup fever to sell books about dragons is mightily impressive.

This confusing tweet ahead of Egypt vs Saudi Arabia was especially eye-catching:

A #Dragon betrayed in #Egypt opens the 2nd #Book in this #YA #Fantasy #Series as blackmail, intrigue and adventure combine with all the team sport action both above and below ground. https://t.co/ZwJLGtN3pI #WorldCup #SaudiArabiavsEgypt #KindleUnlimited #Kindle #KU #Amazon #Sport pic.twitter.com/c3QbEC5DLs

As was this one for England vs Belgium:

You can’t help thinking that this tactic won’t actually generate sales, but, in fairness to Paul Cude, his convoluted advertisements are much less offensive than the attempts of the big corporations.