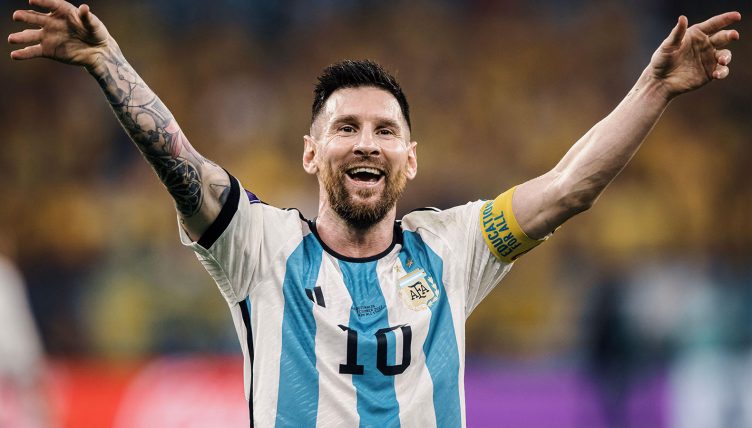 Lionel Messi continues to deliver and now with even 1000 games played he is still more than capable of producing magical moments.

Messi made his first team debut for Barcelona in 2004–05 after rapidly rising through the youth ranks at the club. It didn’t take long before his genius was recognised.

Barcelona won La Liga during Messi’s first season with the senior team, a trophy which Messi went on to win 10 times throughout his illustrious career.

Messi won his first Ballon d’Or that season after he’d scored 38 goals across all competitions which was his best return up until that point. Nine of his goals came in Europe, including a goal in the final.

From that point onwards the Argentine forward never looked back as he then went on to win countless trophies and individual accolades.

In 2010-11, he produced arguably the best-ever performance in a Champions League final as Barcelona triumphed over Manchester United at Wembley.

Plenty of fans and pundits alike consider Messi to be the greatest player of all time and Graeme Souness summed up his thoughts on Messi in an article he wrote for the Times in 2015.

He wrote: “He’s a problem solver, a game changer, the greatest player to have played the game. I don’t say that lightly but I have been saying it for the last three or four years and his match-winning intervention against Bayern Munich reinforced my view.

“The world’s best when I was growing up was Pele and he would have been a great player now, too, but Messi surpasses him. He’s also way out ahead of Diego Maradona – it’s not even close anymore.”

In 2021 Messi also put to bed the doubts that he couldn’t be a success with Argentina. He was in inspired form and dragged his side to the Copa America title, which was his first major honour with Argentina. For his efforts, he won his seventh career Ballon d’Or that year, narrowly edging out the brilliant Robert Lewandowski.

We’ve looked back through Messi’s 1000 games and picked out 10 mindblowing stats from that time.

– The PSG forward has won 41 trophies throughout his career, with an average of 2.15 trophies per season.

– Messi managed to score 700 club goals after just 862 matches for club and country. For context, it took Cristiano Ronaldo 112 more games to reach the same tally. He scored his 700th goal in style too.

A cheeky Panenka penalty to do it 🔥

– The Argentinian’s eternal rival Ronaldo registered 725 goals and 216 assists from his first 1000 matches. Messi has scored 64 more goals (789 in total) and registered 132 more assists (348) at the same milestone in his career.

– Messi has produced double figures for both goals and assists for 16 consecutive seasons. His highest assists tally came during 2011-12 when he assisted 34 goals.

– He holds the record for the most goals scored in a calendar year. In 2012 Messi managed to score a mindblowing 91 goals, which pretty much looks untouchable. The closest anyone has come before was Gerd Muller in 1972 (85 goals) and Pele in 1958 (75 goals).

– Messi has made 3018 successful dribbles in the league and Champions League alone since 2003-04.

– Messi is Argentina’s all-time top goalscorer with 94 goals for his country. His best goalscoring year for Argentina has actually been 2022, with 14 goals and counting…

– No player in the history of football has more goals and assists than Messi. With 1137 to his name in total, he is the front-runner ahead of the likes of Pele, Ronaldo and Josef Bican.