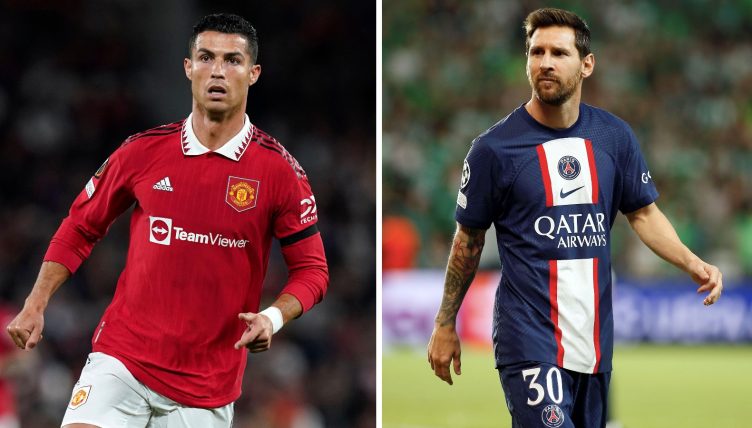 Lionel Messi could soon eclipse his Cristiano Ronaldo for club career goals – and he might even pip his eternal rival to the milestone of 700 goals sooner.

Ronaldo currently leads for total club goals scored (excluding friendlies), but this season Messi is closing the gap. The two era-defining icons have dominated the sport since 2007, but finally things are beginning to change in the twilight years of their careers.

The upcoming winter World Cup will almost certainly be their last, and from there focus will turn to extending their scarcely believable records and achievements in the club game.

Last season, in spite of United’s struggles, Ronaldo moved back ahead of Messi for total club career goals. In his first season back at Old Trafford, the veteran scored a respectable 24 goals in all competitions (18 in the Premier League) for the underperforming Red Devils.

Messi, meanwhile, struggled to find his shooting boots during his first campaign away from Barcelona. The Argentine scored just 11 goals in all competitions (six in the league) but gradually found his feet as PSG reclaimed the Ligue 1 title.

This season, things have turned around somewhat. Messi is already close to beating last season’s tally and is looking back to his best ahead of Qatar 2022.

“I feel good, physically,” the 35-year-old told ESPN. “I had a good preseason this year, which I wasn’t able to do the year before [when he moved from Barcelona to PSG]. It was key to starting off better, as I did, with a lot of mental focus and eagerness.”

Ronaldo is facing frustrations this season, however. He failed to force through a move away from Old Trafford in the summer, meaning that this 2022-23 campaign is the first of his career without Champions League football.

The Portugal international has fallen down the pecking order under new boss Erik ten Hag, reduced to a substitute’s role in the Premier League while rotated in for the midweek Europa League outings. But when he has had opportunities, he’s uncharacteristically struggled to find the back of the net.

“He’s not happy that he wasn’t playing Sunday, don’t get me wrong, but that wasn’t the question,” Ten Hag said of Ronaldo.

“The question was about how he is on the training pitch, his mood when he’s around and he’s happy.

“But of course he wants to play and he’s pissed off when he’s not playing. Clear.”

So will Messi be able to reach 700 club career goals before Ronaldo? We’ve taken a closer look.

– That means that Messi will have to score nine more goals before Ronaldo next notches if he’s to beat his old rival to the 700 mark.

– While that sounds like a tall order, Messi has already caught up seven goals on Ronaldo since the start of the 2022-23 season. He’s scored eight goals in all competitions for PSG this season, while Ronaldo only has one goal for United.

– Messi is currently in brilliant form. His sensational strike against Benfica in the Champions League was the sixth consecutive game in which he’s scored for club and country. He’s scored a total of eight goals in that streak, having notched braces against Jamaica and Honduras for Argentina while getting on the scoresheet in each of his last four appearances for PSG.

– While Ronaldo appears unlikely to start in the Premier League for United any time soon – he was an unused substitute in the Manchester derby and hasn’t started a league match since the 4-0 defeat to Brentford in early August – Messi is an almost guaranteed starter for PSG in Ligue 1. Only the decision to rest him will keep him out of Christoph Galtier’s starting XI.

– Messi has a chance to close the gap further this weekend. He’s likely to start against 17th-placed Reims – who have conceded 19 goals in nine matches so far this season – on Saturday.

– Ten Hag is expected to name Ronaldo on the bench for Sunday’s match against Everton, who boast the Premier League’s best defensive record. It will be tough for the Portuguese to get goal 700 this weekend given the opposition, his form, and what will likely be a limited cameo.

Cristiano Ronaldo has just unbelievably denied himself from reaching 7⃣0⃣0⃣ career goals with this miss…#UEL pic.twitter.com/Ormb0agwmd

– Ronaldo hasn’t scored in open play for Manchester United since April. His only goal for the Red Devils this season was a penalty against Sheriff Tiraspol. He spurned a golden chance to score his 700th club career goal against Cypriot minnows Omonia on Thursday, which just about sums up his form right now.

– Messi is averaging a goal every 142 minutes for PSG this season. In contrast, Ronaldo’s one penalty goal for United has come from 468 minutes on the pitch.

READ NEXT: How Lionel Messi’s record in 2022 compares with Cristiano Ronaldo’s