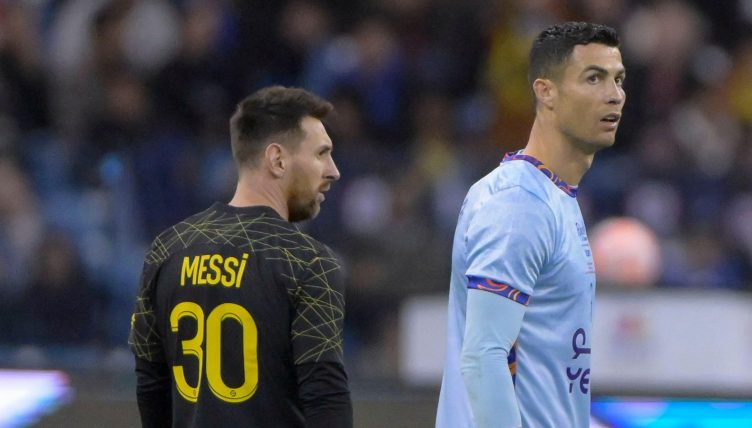 The Lionel Messi v Cristiano Ronaldo rivalry may have now seen its final chapter after the pair shared the football pitch for what’s likely the last time last night.

PSG faced off against a Riyadh All-Star XI in a friendly match at the King Fahd Stadium in the Saudi capital.

Ronaldo has yet to make his debut for new club Al-Nassr after terminating his contract at Manchester United back in November. But now the 37-year-old has got a taste of football in his new home after starring in an all-star team made up of players from Al-Nassr and their city rivals Al-Hilal.

Messi, meanwhile, has recently returned to action for the Ligue 1 champions after he took an extended break following his starring role in Argentina’s World Cup triumph a month ago.

Qatar-owned PSG took the opportunity to play in the money-spinning friendly in Riyadh after losing 1-0 to Rennes on Sunday night.

Up until recently, there had been tensions between Saudi Arabia and neighbouring Qatar, but this friendly appears to be the latest step in repairing the relationship between the two nations.

The game did receive some criticism – particularly from human rights organisation Amnesty International, who called the event an exercise in Saudi “sportswashing”.

In the match itself, PSG were reduced to ten men after Juan Bernat was shown a red card for taking down Saudi Arabia international Salem Al Dawsari. But the French giants still came away with a victory, winning 5-4.

Here are all the moments you might have missed from Messi and Ronaldo’s last dance.

Of course there was warmth between Ronaldo and old Real Madrid pals Sergio Ramos and Kaylor Navas.

Things have changed a bit since those years when El Clasico reached fever pitch.

The old rivals each shared their pre-match embraces on their respective social media channels.

It took just two minutes for the World Cup winner to deliver what the fans had come to see.

Neymar with the assist! 🇧🇷💫pic.twitter.com/HJbYAvwIGh

The Costa Rican completely got it wrong when he came out to punch a cross, missing the ball completely and catching his old team-mate square in the chops.

Mbappe checks on his boyhood idol

That’ll hurt in the morning.

Ronaldo tucks away the penalty

Or Ronaldo tackles Messi. We’ve seen both versions do the rounds on Twitter with the two fanbases seeing what they want to see. We’re staying out of it.

Messi had the opportunity to score his second and put PSG 3-1 up but gave Neymar his chance to get on the scoresheet.

The Brazilian fluffed his lines with a shockingly saveable effort.

Neymar who offers Messi to take penalty but Messi rejected and asked him to shoot. My 🐐#Messi𓃵

After heading onto the post, Ronaldo got a second bite of the cherry.

He wasn’t going to miss a second time after being given this gift from Ramos.

The former River Plate coach was in charge of the Saudi all-star XI. He took the chance to thank his Argentinian compatriot for delivering the World Cup a month ago.

Ten-man PSG went on to win the five-goal thriller 5-4, but plenty didn’t stick around to watch after the two stars off the show were subbed off midway through the second half.