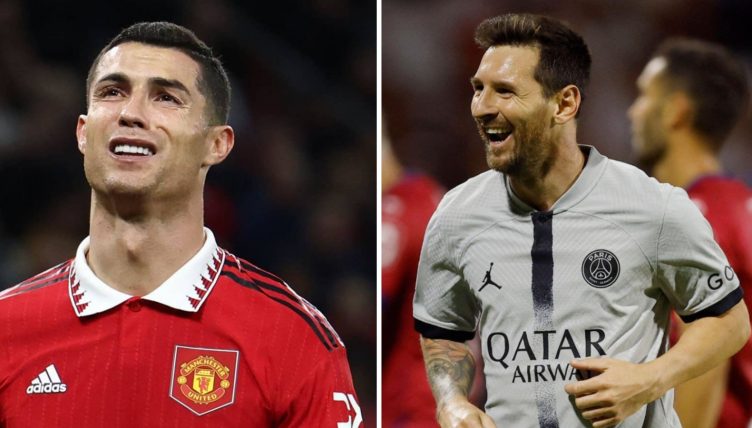 Lionel Messi and Cristiano Ronaldo have defined an era, but they’ve been streets apart for PSG and Manchester United respectively in 2022-23 so far.

The two players appear to be in the twilight of their top-level careers. They’re both out of contract next summer, and this could well be their last season in top-level European football.

Barcelona are said to be interested in bringing Messi back to the Camp Nou, while PSG are reportedly trying to convince him to extend his contract, but MLS side Inter Miami are strongly rumoured to be the Argentinian icon’s next destination.

Ronaldo, meanwhile, looks a forlorn figure at Old Trafford. He attempted to force through a move away from Manchester United in the summer and the chances of him remaining a part of Erik ten Hag’s squad next season look incredibly slim.

Last season, Ronaldo outscored Messi. The 37-year-old’s romantic return to United did not go as planned, with a trophyless and desperately disappointing campaign ending with the Red Devils registering their lowest points tally of the Premier League era. Still, in difficult circumstances, he mustered a respectable 24 goals.

Messi had a slow start to life at PSG, with 2021-22 the first season of his career away from Barcelona. He scored just 11 goals in all competitions, his lowest tally in 16 years, although he did end the campaign as a Ligue 1 champion.

But the picture is looking entirely different in 2022-23 so far.

Ronaldo is struggling to get into Ten Hag’s first-choice XI and has been reduced to a bit-part role, with the majority of his starts and minutes coming in the Europa League.

“It’s up to him,” Ten Hag responded when asked if Ronaldo can score 20 goals this season.

In contrast, Messi looks reinvigorated once again. The 35-year-old has looked unstoppable as part of PSG’s front three, alongside Kylian Mbappe and Neymar, and is arguably the best player in the world once again.

“I feel different to what it was last year. I had a bad time, I never finished finding myself,” Messi said.

“This year is different. I arrived with another head, more accommodated to the club, to the locker room, my teammates, to the game. The truth is that I feel very good. I enjoyed myself again.”

Shots per 90 minutes (inside penalty area)