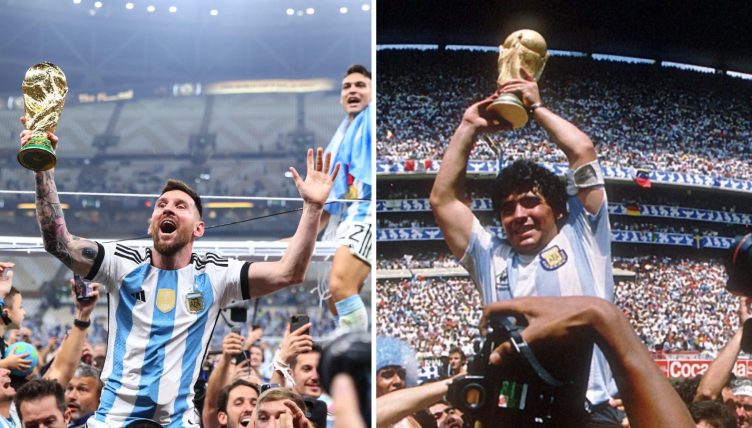 Throughout his astonishing club career, Messi has been spoken of as one of the greats, having shattered records for Barcelona. Despite all that, many felt he lived in Maradona’s shadow, having been unable to match the greatest idol of the Argentinian game.

For all his success, Messi endured the heartbreak of losing the World Cup final in 2014, and the Copa America finals of 2015 and 2016. After losing in a third final in as many years, Messi briefly quit the national team, before being convinced to return.

“For me the national team is over. I’ve done all I can. It hurts not to be a champion,” he told reporters after losing on penalties to Chile in the 2016 Copa America final.

But Messi eventually got his hands on a trophy with the Albiceleste in 2021, shining as Argentina won the Copa America at the Maracana in Brazil.

And now he’s gone one better, proving Argentina’s talisman and leading as captain as they won the most coveted prize in football at Qatar 2022.

“Messi should be the centre of attention and it feels right that he has won a World Cup,” Gary Neville told ITV. “It feels like destiny was there for him and he’s contributed enormous amounts during this tournament.

“During his whole career, he’s lit up every game he’s played in. If you’ve watched Lionel Messi play live you are truly blessed. The passion, emotion, fight and spirit of Argentina – their nastiness to the very end with Emi Martinez in goal – was absolutely amazing.

“You can just feel the emotion through the stadium.”

A huge part of the reason that many consider Maradona to be one of the all-time greats is due to his incredible performances at the 1986 World Cup in Mexico. He was their standout player by a distance as they lifted the trophy that year.

It’s considered to be the best any individual player has ever been in any World Cup in history, and ensures that he will forever be one of the most loved figures in Argentina.

“His performances in 1986 remain the greatest by any individual at a World Cup,” wrote Jonathan Wilson, author of Angels With Dirty Faces: The Footballing History Of Argentina, in The Guardian.

Maradona was 25 and at the peak of his powers at Mexico ’86. Messi has gone a different route, eventually winning at a fifth attempt as a 35-five-year-old – Maradona had retired at that age.

Messi undoubtedly isn’t quite as physically dynamic as he was once was, but he remains one of the greatest players in the world – and deservedly lifted the Golden Ball award for best player – and has grown into his role as national team captain, becoming vocal and inspirational as he leads by example.

We’ve crunched the numbers to compare the two eternal legends of Argentinian football.

1994: Two appearances, one goal, one assist. Round of 16 (banned after second game after testing positive for ephedrine).