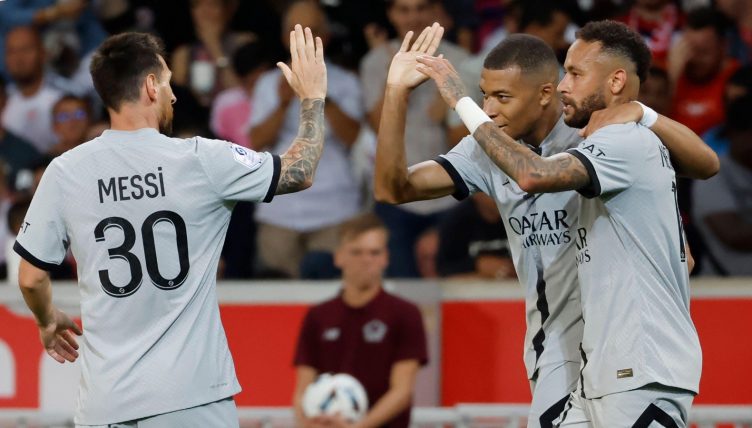 Lionel Messi, Neymar and Kylian Mbappe comprise what’s arguably the most fearsome front three in world football – and PSG’s all-star trio are certainly living up to their billing in 2022-23 so far.

The first season with the three superstar forwards failed to quite live up to the hype. Messi endured a slow start to life in France, with his worst individual campaign in well over a decade, while the place generally looked an unhappy camp under Mauricio Pochettino.

The Parisiens lifted the Ligue 1 title but suffered a limp elimination from the Champions League after suffering a comeback defeat to Real Madrid, with many questioning the front three’s lack of defensive contribution as a key reason.

But there’s now a new boss in charge and there appears to be vim and vigour to the French giants. Christoph Galtier appears to have Messi, Neymar and Mbappe playing with smiles on their faces once again – and the numbers they’re producing are quite frankly terrifying.

There have been one or two awkward moments with the star men opting against passing to one another in dangerous positions. But for the most part, Galtier’s system appears to be getting the most out of the frontline, who are blowing away almost every side they come up against.

Here are 13 of the most impressive stats from Messi, Neymar and Mbappe in the 2022-23 season so far.

– Collectively this season, the trio have made 22 appearances and registered 22 goals and 13 assists in all competitions.

– That works out as a goal every 84 minutes and a goal or assist every 52 minutes between the three players.

– PSG are the top-scoring side in Europe’s top five leagues with 25 goals in seven games. That’s five ahead of second-placed Man City. The front three directly account for 18 (72%) of those 25 goals.

– Neymar has seven goals and six assists in six Ligue 1 appearances. That places the Brazilian top for direct goal contributions in Europe’s top five leagues with 13 in total.

– That works out as a goal or assist every 38 minutes in Ligue 1 for the Brazilian. During his career-best season at Barcelona, 2015-16, he notched 24 goals and 16 assists in 34 La Liga appearances, averaging a goal contribution every 76 minutes – he’s currently twice as prolific so far this season. Approaching the World Cup in peak form.

– Messi has six assists and three goals in six Ligue 1 appearances. No player in Europe’s top five leagues has registered more assists, and only Neymar and Erling Haaland (10 goals and one assist) have more direct goal contributions.

– The Argentinian is halfway to reaching last season’s tally for goals (six) and assists (14) in Ligue 1. We’re less than a fifth of the way through the campaign.

– Messi has more WhoScored Man of the Match awards (four) than any player in Europe’s top five leagues. He’s also the highest-rated player (average rating of 8.91). Neymar is the third highest-rated (8.45) and Mbappe is sixth (8.15).

– PSG have scored 31 goals in nine competitive matches so far in 2022-23. All but four (87%) of those goals have featured one of the front three scoring or assisting (or both).

– On 12 occasions this season, Messi, Neymar and Mbappe have assisted one another.

– Seven of Mbappe’s nine goals this season have been assisted by either Messi or Neymar. Messi to Mbappe (four) is the top assist-to-goalscorer in Europe’s top five leagues so far this season. Neymar to Messi (three) is joint second.

READ NEXT: Messi, Neymar, Mbappe & more glory in Ligue 1 – so why no joy at PSG?