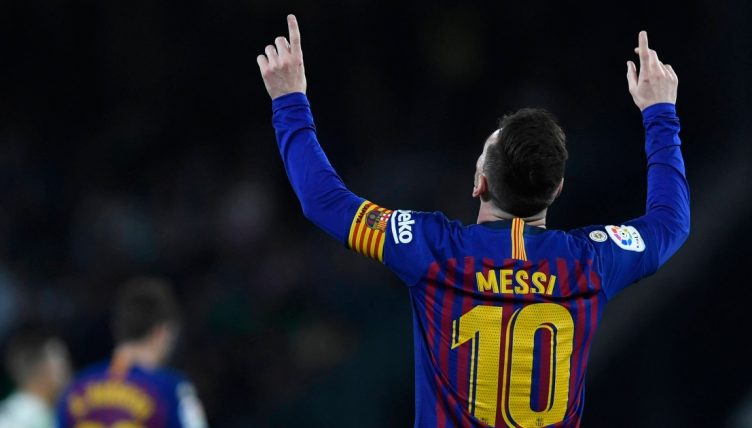 Since the award was introduced in 2009, Messi has been nominated seven times – more than any other player. But while the Argentina forward has won a house full of different awards during his career, he has never collected this trophy, with his second-place finishes in 2015 and 2019 marking the closest Messi has come to the award.

We’ve ranked all seven of Messi’s Puskas nominations from the good to the absolutely majestic.

Argentina were woeful at the 2018 World Cup, limping through to the knockout rounds before being beaten by France in the last 16.

Messi’s only goal of the tournament, the opener in the crucial 2-1 win over Nigeria, was the highlight of their campaign. Taking a long pass on his thigh, the Argentina captain shifted the ball onto his right foot and banged it home.

A very good goal but, stripped from its World Cup context, it’s hardly a Puskas nominee.

We’ve done our best to ignore the ‘defending’ on show from Arsenal but cannot get past the suicidal backheel from Cesc Fabregas that led to this goal in 2011. Perhaps he was already wearing a Barca shirt in his head?

From there, Messi rounded Manuel Almunia and nicked the bouncing ball into the net. It’s good but easy to see why this wouldn’t have won any Puskas Awards.

Of course, we must finish with the man who has received more Puskás Award nominations than anyone on the planet.

Upon completing his hat-trick against Valencia back in 2010, Messi scored a goal so aesthetically pleasing that Love Island producers would enquire about its availability for their show.

It bore all the hallmarks of peak Messi, just as he was entering his imperial phase.

There was the shimmy to escape one defender, the low centre-of-gravity that allowed him to allude his muscular marker and the coup de grace of sitting the goalkeeper down on his arse.

Probably the highest quality fourth-place finish ever – and that’s including Arsenal’s 2007-08 vintage.

Firstly, the ball is positioned much further out than most of Messi’s free-kicks. Then, instead of going over the wall and towards the near top corner as you might expect, Messi aims to beat the goalkeeper on his side.

The result was a set piece that couldn’t have been better placed if Messi picked the ball up and stuck it there by hand.

Taking possession on the right touchline, Messi turned into a ventriloquist and sold the Athletic defenders a series of dummies. As if that wasn’t enough, the Barca talisman embarrassed the goalkeeper by slamming a shot in at the near post.

Okay, it was only a friendly. But scoring the winner against Brazil is a dream for any self-respecting Argentine and doing so in comic-book hero fashion made this 2012 effort even sweeter.

After stealing the soul of one defender, Messi donned his invisibility cloak to ghost through the Brazilian defence before curling a superlative effort into the top corner.

This chip, to use the technical term, was fuckin’ outrageous.

Two other factors elevate this goal into the pantheon; the brilliantly futile dive from the Betis keeper and the light kiss of the crossbar as it flies in.

READ NEXT: 17 of the best quotes on Messi: ‘You need a machine gun to stop him’