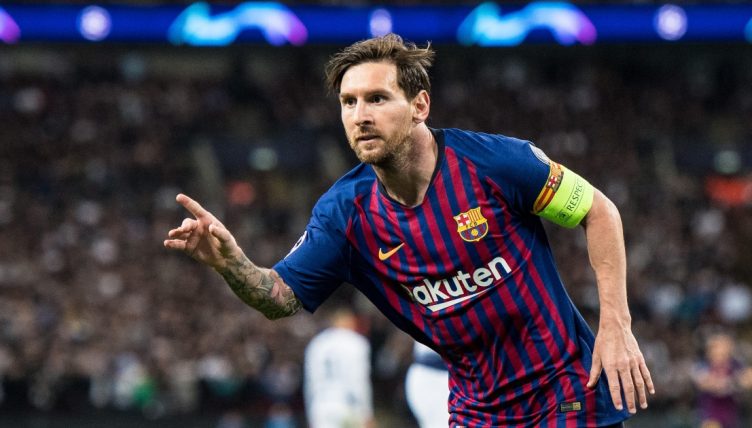 While we may never know if Lionel Messi can do it on a cold, windy night in Stoke, he can definitely produce stunning performances at Wembley.

Messi has made just three appearances at the iconic stadium during his illustrious career and always treats it like his own personal playground.

We’ve taken a look at his three games at Wembley and how he fared in them.

After Barcelona beat Manchester United in the 2009 Champions League final, the two sides faced each other yet again in the 2011 final at Wembley.

Wayne Rooney gave United hope when he responded to an opener from Pedro but they were ultimately powerless to stop prime Barca and their mesmeric talisman.

Messi tormented Rio Ferdinand and Nemanja Vidic, and he restored Barcelona’s lead after driving forward and unleashing a brilliant strike from outside the box.

His dribbling constantly caused panic in the United defence and David Villa capitalised in the 69th minute by whipping a shot into the top corner from just outside the penalty area.

The Argentina international had a 92% pass accuracy, completed 10 dribbles, created four chances and had three shots on target during his first trip to Wembley and unsurprisingly won the Man of the Match award.

“We never got to grips with Messi at all,” Ferdinand said in his autobiography. “He played from deep but if I went chasing him, I’d leave a hole for their midfielders and wingers to exploit. Should I stay or should I go? I never knew.”

While Sir Alex Ferguson admitted that Pep Guardiola’s Barcelona were the best side he ever faced, he does still have some regrets about the final.

“I should have changed at half-time and put Park Ji-sung on Messi,” Ferguson later said. “That was a mistake… I was going to do it at half-time, then I said: ‘Well, we just equalised before half-time, they may see the game differently, we may grow into the game better.’

“We were actually quite good in the last 10 minutes of that half. We came into it and we could have been in front. But if I’d played Park against Messi, I think we’d have beat them. I really do.”

But we have to disagree with Ferguson on this occasion. While Park famously man marked Andrea Pirlo out of a game in 2010, nobody was going to stop Messi on that night.

Tottenham played at Wembley while their new stadium was being built and they were drawn against Barcelona in the Champions League group stages in 2018-19.

“It’s very clear, very simple, we need to be near him when he’s about to get the ball,” Spurs manager Mauricio Pochettino said before the game at Wembley when asked how to contain Messi.

“If we leave him space in a one-to-one, he will get away from his marker. We will need to have our lines together. Ideally, we would like to anticipate the pass because if he gets the ball he will get off his marker.”

But stopping Messi is a lot easier said than done.

The Argentina international pulled the strings from the first minute at Wembley as his calculated through-ball dissected the Spurs defence in the build-up to Philippe Coutinho’s opener. Ivan Rakitic then made it 2-0 with a stunning volley,

Despite the Wembley playing surface being noticeably below par, Messi still showcased his dribbling skills and struck the base of the post twice in three minutes at the start of the second half.

After Harry Kane pulled a goal back for Spurs, Jordi Alba crossed the ball into the penalty area moments later and it was beautifully placed into the bottom corner by Messi.

Erik Lamela made it 3-2 but Barcelona’s No.10 had the final say, firing past Hugo Lloris with a simple strike after Luis Suarez’s brilliant dummy.

“I think we can talk about Tottenham and their efforts later on but you have to marvel at this guy here,’ Ferdinand, who was now in the comfort of the BT Sport studio, said after Messi was named Man of the Match.

“I feel blessed that I was in this stadium live to be able to watch him. I’ll tell my kids about it tomorrow on the school run.

“This guy – what he does on a football pitch is just ridiculous. It’s like he’s got a remote control in his hand and he assesses the situation and says ‘Yeah, right’, just plotting the location and ‘I’ll put the ball exactly where I want to put it on a sixpence.'”

It was another night in the capital belonging to the Argentine 🐐 pic.twitter.com/CsxEV5XdpX

After finally getting his hands on an international trophy at the 2021 Copa America, Messi faced Euro 2020 winners Italy at Wembley in the inaugural Finalissima.

The 34-year-old has managed to adapt his game in recent years, becoming a decisive passer rather than a pure goalscorer.

He created Argentina’s opening goal against Italy by gliding past Giovanni Di Lorenzo before picking out Lautaro Martinez, who fired home from close range.

Angel Di Maria made it 2-0 in first-half injury-time and Messi got his second assist in the dying seconds of the game when he set up Paulo Dybala.

Alongside his two assists, Messi also created the most chances (four), completed the most take-ons (five) and carried the ball 150 metres more than any other player. He was then named Man of the Match, making it three from three at Wembley.

“He controlled the game from start to finish,” the UEFA Technical Observer Panel wrote in their report. “He showed great skill to make the assist for Lautaro Martinez and more chances for his team-mates and was unlucky not to score himself.

“He has really put in a masterclass of a performance for the Wembley crowd; it was a joy to watch.”

Leo Messi was on FIRE last night in the #Finalissima! 🔥

2 assists and a MOTM performance 🅰🅰