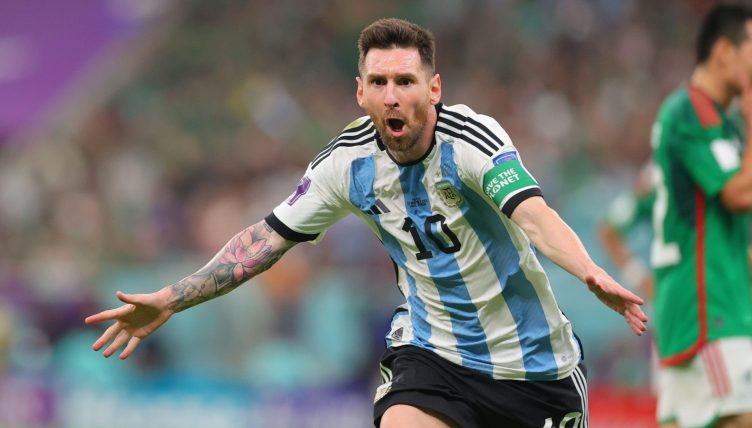 Not only is Lionel Messi Argentina’s all-time top scorer, but he’s scored more World Cup goals for his country than any other player – including the legendary Diego Maradona.

With his 11th World Cup strike against Croatia, Messi eclipsed the unforgettable Gabriel Batistuta for Albiceleste goals on the biggest stage of all.

He scored his first goal in the tournament as a teenager way back in 2006, and has cemented his glittering World Cup legacy by notching a brace in Argentina’s astonishing penalty shootout victory over France in the final of Qatar 2022.

“The last thing I want to tell you and it’s not a question, but I just wanted to say the World Cup final is coming and sure, we all [Argentinians] want to win the cup,” Argentinian reporter Sofia Martinez told Messi after his stunning performance in Argentina’s 3-0 semi-final victory over Croatia.

“I just want to tell you that no matter the results, there’s something that no one can take from you, and it’s the fact you resonated with Argentinians, every single one. I’m being serious.

“There’s no kid who doesn’t have your team flannel, no matter if it’s a fake, real or a made-up one. Truly, you made your mark in everyone’s life. And that, to me, is beyond winning any World Cup.

“No one can take that from you and this is my gratitude, for the amount of happiness you bring to a lot of people.”

“I seriously hope you take those words into your heart because I really believe that’s more important than winning a World Cup and you already have it. So thank you, captain.”

“It’s impressive that I can finish like this,” the 35-year-old told reporters after Argentina’s triumph in Qatar.

“I knew that at some point God was going to give it to me and I don’t know why, but I felt it was going to be like this. Once again he made me very happy.”

Here’s our ranking of all 13 of Messi’s World Cup goals.

Messi’s first World Cup penalty was struck incredibly casually, just nine minutes into Qatar 2022. He gave the Mohammed Al Owais the eyes, didn’t blink first, and slotted it past him.

You’d never have guessed what was to happen next.

Argentina's number 10 gets his first goal of World Cup 2022 from the penalty spot inside 10 minutes!!#ITVFootball | #FIFAWorldCup pic.twitter.com/eUxnno9m7v

A different technique to the spot-kick he scored against Saudi Arabia, Messi looked entirely unruffled by the fact he’d missed his last spot-kick against Poland.

Emphatically struck, he doubled Argentina’s lead in the quarter-final against the Netherlands, later scoring a second spot-kick in the shootout later that evening.

It was back in 2012 that Messi missed a penalty in the Champions League semi-final against Chelsea, which proved costly as Barcelona succumbed to defeat to the 10-man Blues.

You’d never have guessed that kind of history hung heavy on his shoulders when he stepped up in the 2022 World Cup semi against Croatia, who had made a habit of being penalty specialists in recent tournaments. Dominik Livakovic had been one of the players of the tournament, but there was no saving Messi’s decisively-struck effort, right into the top corner.

In a pressure situation, Messi opened the scoring with a near-perfect effort.

Argentina have one foot in the final… and it's that man again!! 🤩🇦🇷

Messi’s fourth penalty – and third in as many games of the knockout stages – of Qatar 2022 was on the grandest stage of all.

Argentina erupts as Lionel Messi converts from the spot to put his country in the lead… 🇦🇷#ITVFootball | #FIFAWorldCup pic.twitter.com/eekK0kSPPD

A would-be winner, in extra time of the World Cup final.

Right place, right time. That’s been the case so many times in Messi’s career that we’re beginning to think he probably understands the game pretty well.

Have some of that.

Messi’s first World Cup goal, scored when he was just 18, made him the youngest Argentinian to score in the competition.

Cheered onto the field by a beaming Diego Maradona, sitting in the stands, Messi showed he was something special, scoring and setting one up for good measure.

In 2006, an 18-year-old Leo Messi made his World Cup debut in Argentina’s group game against Serbia & Montenegro—he subbed on in the 74th minute to assist and score in a 6-0 win 💫

Vintage Barcelona Messi, this. The run and finish.

From the World Cup in Brazil in the group stage of the 🇦🇷🇦🇷Tango meeting, 🇧🇦🇧🇦Bosnia and Herceg Messi, and the insistence on staying in the World Cup and reaching the final 🏆💪💪🇦🇷 pic.twitter.com/HjX3YkEZ2l

Australia defended heroically against Argentina in the Round of 16 clash, but this was a perfect example of how you can be punished by Messi if you let your guard down for a split-second.

He drifted into the area and brilliantly took advantage of a heavy touch by Nicolas Otamendi, weighting his first touch perfectly before slotting into the bottom corner.

It was inevitable that he'd mark his special day with a goal!

Argentina were desperate for a moment of inspiration, staring down the barrel of a group-stage exit, following their shock defeat to Saudi Arabia and lacklustre first-half display against Mexico.

Their star man delivered to break the deadlock, and he delivered.

Pablo Aimar’s emotional reaction on the bench said it all, while the aerial replay showed what an inspired strike it was. How do you even stop that?

Lionel Messi is just one goal away from equalling Gabriel Batistuta's record for the most goals scored at the World Cup for Argentina! (10)

Will he equal the record today? 👀 #BBCFootball #BBCWorldCup pic.twitter.com/DV6ED45Q5R

Messi’s only World Cup free-kick was an absolute peach.

“The guy is so good…and I’m s–t,” Nigeria keeper Vincent Enyeama joked with the referee afterwards, pleading with him not to give the Argentinian No.10 any more free-kicks.

On first viewing, this goal isn’t all that special. But the slo-mo replay shows how blessed we are to have witnessed a genius artist in their prime.

Maybe not quite as good as Dennis Bergkamp’s World Cup wondergoal, but in all honesty not that far off.

Last minute of regulation time. Iran have defended for their lives, stoically, with a brilliant backs-to-the-wall display.

When Messi picked up the ball, every single opposition player was between him and the ball. No matter.

Take it away, Jonathan Pearce.

7.A 89th minute winner against Iran

It was the WC 2014. Iran did well to hold back Argentina and the score was 0-0, until Lionel Messi scored a beautiful 89th minute winner from outside the box. Also the commentary was classic behind this goal “Messi,give it to him and pray” pic.twitter.com/7mnjprHKSj