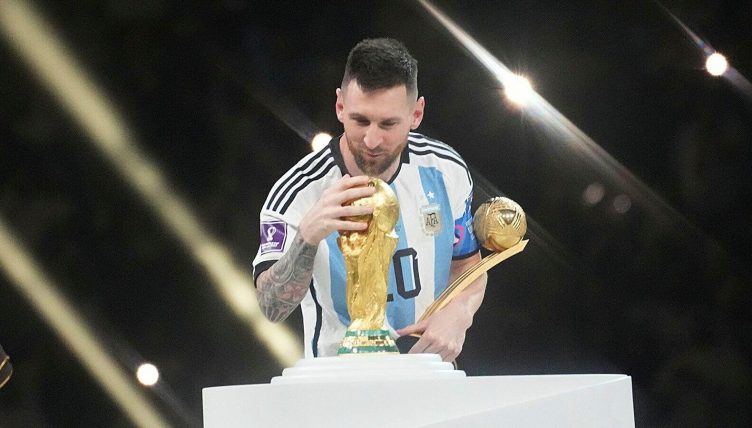 Lionel Messi has reached the very zenith of football, having captained Argentina to World Cup glory. Pele, Barack Obama, FC Barcelona and Diego Maradona’s son were among those that have congratulated the PSG star.

The 35-year-old enjoyed the fairytale ending to his international career, finally winning the most prestigious prize in football at the age of 35.

He scored seven goals at Qatar 2022, including two in the astonishing 3-3 against France in the final, before stepping up to convert a penalty in the Albiceleste’s victorious penalty shootout.

“Obviously I wanted to close my career with this, I can’t ask for anything more,” Messi told Argentine broadcaster TyC Sports. “Thank God he gave me everything. Almost finishing my career in this way is amazing.

“After this, what else is there? I was able to win the Copa América, the World Cup … almost at the end. I love football, what I do. I enjoy being with the national team, the group, I want to continue living a few more games being world champion.

“It’s crazy, we really wanted it but it is the most beautiful thing there is. Look at what it is, it’s beautiful. I wanted it so badly. God was going to give it to me … we suffered a lot but we made it. I can’t wait to be back in Argentina to see how crazy that is going to be.”

“It’s the dream of every little kid, I was lucky enough to have achieved everything and what I was missing is here.”

Here are some of the best reactions and tributes to Messi’s World Cup triumph.

“Congratulations friend! 🏆 YOU ARE WORLD CHAMPION 🤯 Let them say what they want, you are and will be the best 🐐” Messi’s old pal posted on Twitter.

“Today, football continues to tell its story, as always, in an enthralling way. Messi winning his first World Cup, as his trajectory deserved. My dear friend, Mbappe, scoring four goals in a final. What a gift it was to watch this spectacle to the future of our sport. And I couldn’t fail to congratulate Morocco for the incredible campaign. It’s great to see Africa shine. Congratulations Argentina! Certainly Diego is smiling now.”

“Argentina are World Cup champions, happy for you, Leo Messi, because nobody deserved this cup more than you,” Maradona’s son wrote on Instagram.

“Happy for all my people and my country. I’ve always felt Argentinean in y soul. My father is celebrating up there, you don’t know how much I want to hug you.”

“It’s nice to win a trophy, but it is more of a relief. The pressure he has been under for the last few years, and to win it in his last game for his country, what an ending for him and his family.” said Keane, speaking on ITV.

“A sign of greatness is when you make the players around you better, and he does that. That’s not up for debate. He’s a great, great player. It’s great to see him win that trophy.”

Congrats to Argentina and to the GOAT, Lionel Messi, for an amazing World Cup victory. https://t.co/TkPRhReOV9

Many congratulations to Argentina on doing this for Messi! Wonderful comeback from the way they started the campaign.

Special mention to Martinez for the spectacular save towards the end of extra time. That was a clear indication to me that Argentina would clinch this. pic.twitter.com/KoXOTl1fSE

It’s been an absolute privilege to watch Lionel Messi for nearly 2 decades. Moment after moment of spellbinding, breathtakingly joyous football. He’s a gift from the footballing Gods. So pleased that he’s lifted the ultimate prize in our sport. Gracias y felicidades, campeón. pic.twitter.com/XTiZUcovLI

“What a game, what a World Cup final.
Congratulations Argentina and my friend Messi.
You couldn’t go through this sport and not be a world champion. This trophy only came to crown his magnificent career.”

“Lionel Messi has shaken hands with paradise,” the one and only Peter Drury announced.

“The little boy from Rosario, Santa Fe, has just pitched up in heaven. He climbs into a galaxy of his own. He has his crowning moment and of course he is not alone.”

“It means that the debates are over,” Ballague told CNN Sport. “The [Cristiano] Ronaldo debate is over, the [Diego] Maradona debate is over, the best player in the world ever [debate] is over. That’s what it means. In terms of what he had done for 15 years, he was just the best player in the world,” Messi’s biographer told CNN.

“Try to equal the kind of consistency delivered at the top, the fact that he’s won so many leagues, so many Champions Leagues – Maradona didn’t – but of course now you’re going to start every sentence with ‘World Cup winner Leo Messi.’ The end of all debates. It is over. For his legacy, in a way it’s the end of an era.

“It finishes on a massive high of somebody that has delivered at the top. It has a sadness to it – it’s not just that he’s going, find me another Messi. Find me another player that’s like him, that is short, tiny, not the fastest, but can still manage to dominate the game and to influence the game.”

“He had played here like destiny called, breaking records, as he has always has,” wrote Sid Lowe, who chronicled Messi’s career in Spain so wonderfully, in The Guardian.

“Look at those scattergraphs and so often he’s a lone dot, like some far away planet. This is the man who exhausted adjectives and invented a new category: “apart from Messi”. At 35, his two goals here took him past Pele. Only Mbappe scored more in Qatar than his seven goals plus two penalties in shootouts and no one provided more assists.”

“There’s a sense that he deserves the World Cup, and that Argentina wanted to make sure he won it. And he absolutely wanted to win it for Argentina,” the author of Angels With Dirty Faces: The Footballing History Of Argentina, told RTE Radio.

“My hands are still shaking. There are tears in my eyes. I’m writing this less than 10 minutes after the end of the greatest World Cup final ever, which Lionel Messi’s Argentina won on penalties over Kylian Mbappe’s France, and I do not believe it is recency bias that makes me think that this match was the single most thrilling sporting event I have ever witnessed,” wrote the excellent Brian Phillips in his superb The Ringer write-up.

“Every game is a story. And when you consider the stakes, the performances, the history in the balance, the refusal of either side to lose, the moments of astonishing play, the sudden reversals and wild swings of momentum, the knife’s-edge uncertainty of the outcome, and the epochal significance of a result that brought the career of the world’s best player to an almost magically perfect climax, it is hard to imagine a story more overwhelming or more satisfying than this one.”