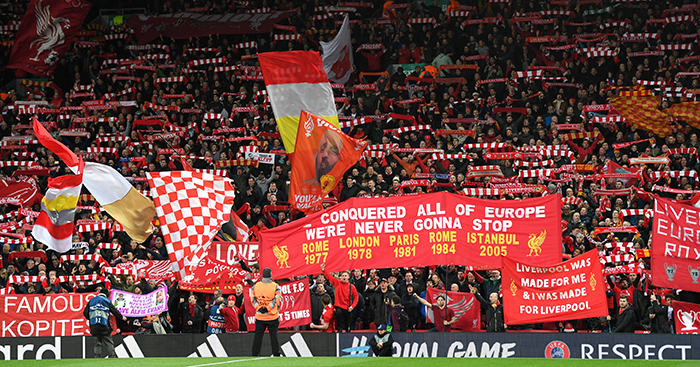 Liverpool and Everton have terrible pre-match songs. Sorry, but it’s true. I decided to tastefully mix them together to create something better fans of both clubs can both sing.

For reasons that aren’t entirely clear, “You’ll Never Walk Alone,” a show tune from the 1945 musical Carousel, has become a football song.

Since the 1960s, Liverpool fans have sung Gerry and the Pacemakers’ rendition of the track as a pre-match motivator. Outside of Liverpool, the song has been adopted by supporters of Celtic, Borussia Dortmund and Feyenoord.

But “You’ll Never Walk Alone” should not be a football song. Yes, Liverpool fans — and fans of all the above clubs — can create an electric atmosphere, but that is more or less in spite of the show tune, not because of it.

It’s quite slow, for one. That’s something you’ve surely noticed about “You’ll Never Walk Alone”, whether you’re listening to it alone on your gramophone (right) or hearing it from the mouths of 50,000 football fans (wrong).

You might describe it as gently rousing. Defiant. The song is good, obviously, really good, but it’s not a song for a crowd.

Listen to the Anfield performance in the Champions League semi against Roma. In terms of volume, they nail it, as ever. Spine-tingling passion from the Kop.

Thirty seconds in though, you can feel the crowd really willing the song to be a bit faster but also knowing that will mess it up because it’s already completely fucking unsingable as it is, let alone faster.

The lines start to blur into one another, the atmospheric pauses that Gerry uses to great effect are lost. By 45 seconds, everyone’s completely out of time because it’s a race to sing the next “Walk on! Walk on!” as fast as possible, even though the structure of the song doesn’t really allow that to work.

God, the first “and you’ll never walk alone” line is just one note over and over, isn’t it?

No matter how many Liverpool games you watch, part of your brain is always like… right, they’ve done the “ne… ver… walk…” which has lasted about an hour, and the next word is coming, and melodically it’s surely going to go either dramatically up or down, and you’re ready for it, but then it doesn’t: “a… lone” just sort of shuffles out at the end and you can feel that everyone has just used every last bit of breath in their lungs and it’s been wasted on that note which isn’t even different from the others.

Admittedly, they pull it back with the “never” in the next line, which is good.

I should stress that this isn’t a jab at Liverpool. They’ve got some of the best supporters in the world, and the fact that they can raise the hairs on the back of your neck with what is a fundamentally inappropriate piece of music is, frankly, very impressive.

But when you see the Anfield crowd sing the song, what you’re witnessing, essentially, is a group of very passionate, very loyal fans who are doing their best to make it work but in their heart of hearts probably just want to sing “Oh when the Reds go marching in” because it’s so much better, you can clap to it, there’s that OH! WHEN! THE! call and response part, and you can make it faster on each repetition without confusing the opposite stand.

Also — and this really needs to be stressed — seven of the song’s 12 lines are about the weather.

For different reasons, Everton also have a pretty bad pre-match song. While “You’ll Never Walk Alone” trips up over its downtempo moodiness, “Theme from Z-Cars” is just phenomenally trivial.

It is cheery, I suppose, but how is that supposed to motivate Wayne Rooney and the boys? It’s completely ridiculous. It’s an instrumental track led by an out-of-tune recorder or a kazoo or something. It has no words.

The only thing more ridiculous than the actual sound of “Theme from Z-Cars” is that Watford use it as well.

With all the music ever recorded at their disposal, exactly 10 percent of Premier League football teams think the theme tune to a 1960s police drama is the absolute best way they can encourage their players to win a football match.

Actually, watching that video has almost changed my mind. I want to be in that crowd. Listen to the cameraman singing along.

But really, “You’ll Never Walk Alone” and “Z Cars” are unacceptable football songs. The former is too serious, the latter nowhere near serious enough. I’m not advocating wrestling-style pantomime shit or Kasabian, but surely there’s something better than this. A middle ground. A compromise.

Maybe the only sensible thing to do is somehow combine the two songs into one, taking the positive features of each and using them to mask those glaring deficiencies. “YNWA” and “Z-Cars”, together.

Can this be done? With difficulty, I suppose, if you don’t do music.

Neither song has received the Pet Sounds treatment, which means instrumental and a cappella versions are hard to come by, and just stacking the tunes on top of each other produces a total fucking cacophony. (Worse than either song on its own, arguably.)

So instead, here I am, spending a solid two hours on GarageBand jabbing the A, S, D, F, G, and H keys to the sound of a digital flute, butchering a slowed-down version of the “Z-Cars” melody and, yes, this is the result.

Actually, that’s just a shit-sounding “Handbags and Gladrags”, isn’t it? Forget it.