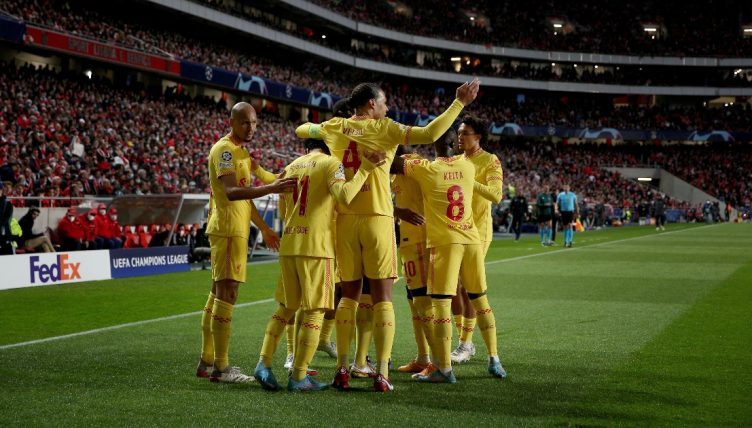 Liverpool have taken a massive step towards the Champions League semi-finals after an impressive 3-1 victory away to Benfica.

Jurgen Klopp’s Reds have a formidable record at Anfield and will be confident of completing the job in the second leg next week.

There’s no sense of their momentum being stunted ahead of Sunday’s potential Premier League title decider away to league leaders Manchester City – with yet another win to extend their incredible run in 2022.

The quadruple dream remains alive, with Klopp’s side continuing to look strong on all three fronts after already securing the League Cup.

Benfica struggled to deal with the intensity of the visitors early doors. Ibrahima Konate opened the scoring with a towering header in the 17th minute, and Sadio Mane doubled Liverpool’s lead in the 34th minute – after Luis Diaz headed across Trent Alexander-Arnold’s sensational cross.

Liverpool were punished for failing to take their chances to put the tie to bed as the Portuguese outfit came out with a renewed vigour at the break, scoring through Uruguayan striker Darwin Nunez in the 49th minute.

The hosts made the second half more competitive, but Liverpool restored their two-goal advantage as Diaz put the finishing touch to a well-worked move three minutes from full-time.

“Coming here and winning an away game in the Champions League is tough,” Klopp told BT Sport after the game.

“Benfica fought for their lives, we gave them a little bit too much but they deserved the goal as well, even though we could have defended better – they had counter-attacks, it is not easy to keep the ball all the time and the more risk you take, they have really good players.

“It was a tough game, what I expected, the crowd was there, we knew 2-0 is nothing, nice but not more. They score the goal and it was much more open than we wanted but the goalie was probably the best player and made a couple of really good saves – we are two goals up, half-time, let’s keep going.”

Here are 10 of the most impressive stats and records from Liverpool’s victory in Lisbon:

– Liverpool haven’t conceded a goal in the opening half of their last 19 matches. That sets a new club record – via James Pearce.

– No player has scored more Champions League knockout goals than Sadio Mane since the 2017-18 season. The Senegal international has scored 13 in the knockout stages in that time, which ties him level with Cristiano Ronaldo.

An absolutely outstanding performance in a massive game 🙌🔥

– Klopp is still unbeaten in his seven Champions League matches as a manager against Portuguese sides (won six, drawn one, lost none).

– Liverpool have now won their last eight away matches in all competitions. That’s the best run in the club’s history (via @OptaJoe). Etihad up next.

Liverpool's home defeat vs Inter is the only time in their last 18 matches (if you include EFL Cup final pens) that they have not won. Since draw vs Newcastle last season, they have won 44 of last 54 matches in all comps. Lost only vs West Ham, Leicester, Inter. Incredible run.

– Konate and Virgil van Dijk completed 85 passes each. That’s more than double the amount from any of the hosts’ players, excluding Jan Vertonghen (47 passes).

– Luis Diaz registered a goal, an assist, four shots, two on target, three dribbles, all three of the aerial challenges he contested, and 35 accurate passes (92% accuracy).