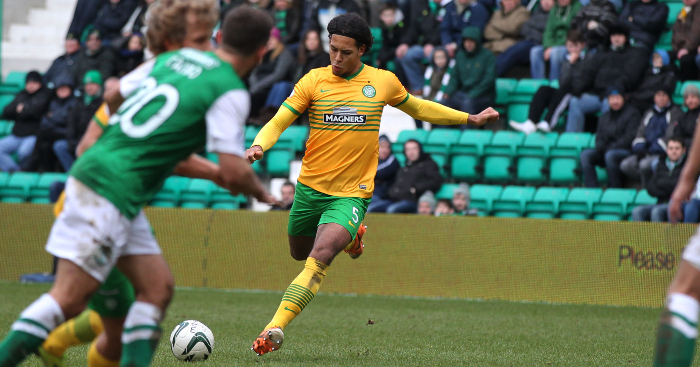 Virgil van Dijk is the frontrunner for the Premier League Player of the Season thanks to his outstanding performances at the heart of Liverpool‘s backline this season – and they aren’t even using one of his many talents.

He’s played almost every minute for Liverpool, who have the best defensive record in the Premier League with just 18 goals conceded from 31 games and 17 clean sheets.

The Dutchman is also a handy player to have in the box for set pieces, having recently scored a brace in the 5-0 win over Watford before putting Liverpool back ahead in the 3-1 win over Bayern Munich. But he’s also got a secret weapon…

Van Dijk showed off his ability to strike a dead ball in a training ground video he posted from his time at Southampton, but Premier League fans have rarely seen him try it on the pitch.

At Saints, James Ward-Prowse, Dusan Tadic and Cedric Soares were often ahead of him in the pecking order.

But Celtic fans will know all too well about his free-kick ability.

During two seasons at Celtic Park, he scored several – including two crackers in back-to-back games against Hibs and Dundee in 2014.

The first is especially good. It’s an absolute rocket, placed perfectly into the top corner. That kind of rare free-kick where you can’t ask any questions of the wall or goalkeeper – what could they have done?

The next wasn’t quite as sensational, but doing it again a week later showed it was no fluke.

A wasted opportunity at Liverpool?

As was the case at Southampton, the centre-half rarely gets to take free-kicks at Liverpool. Trent Alexander-Arnold, James Milner, Mohamed Salah and Xherdan Shaqiri are ahead of him in the queue.

Alexander-Arnold has shown himself more than capable of rifling one in from 25 yards, prompting Jamie Carragher to compare him to David Beckham.

But his free-kick against Watford is the only one Liverpool have scored in the league this season – so it’s an area to improve in.

Only Sebastian Larsson, Cristiano Ronaldo and Juan Mata have scored more Premier League free-kicks than Steven Gerrard, and in Philippe Coutinho, who had five to his name since Gerrard retired, they looked like they had a ready-made successor.

Van Dijk arrived in the same transfer window that Coutinho left in. He’s shown himself capable of stepping up at Celtic and now that talent could come in handy for Liverpool.

Just think: last game of the season, City are thrashing Brighton 6-0, it’s 0-0 against Wolves and Klopp’s men need three points to go top. Anfield is getting swallowed by anxiety as the clock ticks into injury time. A free-kick is given, 25 yards from goal.

You’d just trust him, wouldn’t you? Is there anything he can’t do?