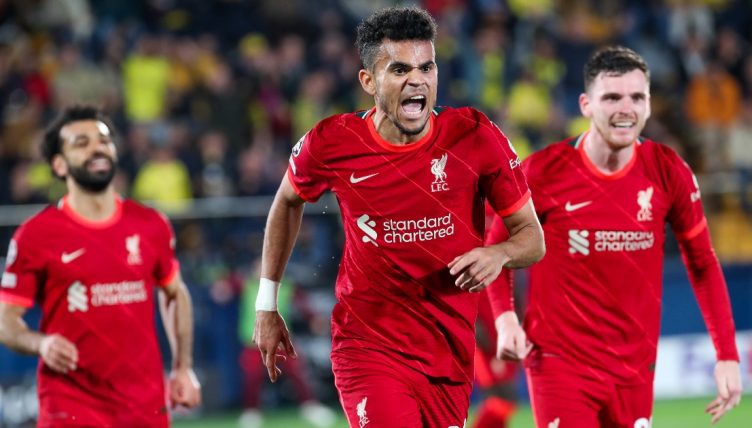 Liverpool have booked their place in a 10th European Cup final after coming from two goals behind to beat Villarreal 3-2 at the Estadio La Ceramica.

Unai Emery’s Yellow Submarine produced a stunning first-half display to shock the visitors, scoring twice to get the tie back level on aggregate after Liverpool’s comfortable 2-0 win at Anfield last week.

But the introduction of January signing Luis Diaz at half-time allowed the Reds to shift a gear. Fabinho scored Liverpool’s first with a cheeky nutmeg through Geronimo Rulli’s legs and Diaz equalised with a header before Sadio Mane capped off the comeback in the 74th minute, making it 5-2 on aggregate.

The 2022 Champions League final in Paris – against either Manchester City or Real Madrid – will be their third in five years under the management of Jurgen Klopp.

“Before the game I told the boys I’d like to read the headline ‘Mentality monsters were in town’ – ‘Mentalidad monstrousa’ or whatever – because I wanted us to be the ones who went for the result and not defend,” Klopp told BT Sport after the match.

“I couldn’t see that at first but the second half was. For me it was like this because of how much we impressed on them about coming back in the second half.

“With 500 games the boys played, a completely normal thing like the first half can happen but how we reacted and how it happened is special.

“I know supporters of other clubs might have been happy with the first half and that we got a ‘knock’.

“It is really difficult to reach three finals (in one season), which is probably the reason why no one did it so far but we made it happen. When the finals show up in our schedule we will make sure we are ready for it.”

Here are 15 stats that exemplify what an incredible 2021-22 season Liverpool are having, and what a job Klopp has done in recent years.

– The comeback maintains their 100% winning record on the road in the Champions League this season, with victories in Porto, Madrid (Atletico), Milan (AC Milan and Inter), Lisbon (Benfica) and Villarreal. Paris will be their last overseas trip in 2021-22.

– Only Ferguson (four) has led an English club to more European Cup finals than Klopp. The German now moves level with the legendary Bob Paisley in taking Liverpool to three, while moving ahead of Nottingham Forest icon Brian Clough and Reds greats Rafael Benitez and Joe Fagan (two).

Relive all of the goals from last night's game in just 60 seconds ⬇️#UCL pic.twitter.com/Uq7uzSWk2y

– Only three other clubs have hit double-figures for European Cup final appearances – Real Madrid (16), AC Milan (11) and Bayern Munich (11). The Paris final will be Liverpool’s 10th – and they’ll be competing to win a seventh, which would see them move joint-second with Milan, only behind Madrid.

– Before this season, no English side had ever reached the final of the European Cup, FA Cup and League Cup final all in the same season. No other side has reached May still in contention for a quadruple. History-makers.

– Liverpool will play 100% of the games they could have played in 2021-22 by seeing each cup competition through to its conclusion. The last time the club did this, in 2000-01, they won all three trophies on offer: the UEFA Cup, the FA Cup and the League Cup.

– As well as Liverpool playing the maximum amount of games, so too have Senegal’s Sadio Mane and Egypt’s Mohamed Salah, who faced off in both the AFCON final and World Cup play-off earlier this year.

– The 139 goals scored by Liverpool in all competitions in 2021-22 is the most they’ve ever managed in a single campaign. They still have four league games and two finals yet to play.

– Luis Diaz has been at Liverpool for less than six months, but he’s already made it to the Champions League final. That’s a feat that legendary players like Ronaldo Nazario, Zlatan Ibrahimovic, Eric Cantona and Patrick Vieira never managed.

"We never tend to make these Champions League semis easy for ourselves." 😅

Trent Alexander-Arnold and Fabinho reflect on Liverpool's comeback win to secure a place in the #UCL final! 🇫🇷

– The ball in for Diaz’s equaliser was Alexander-Arnold’s 18th assist of the season in all competitions. Thomas Muller (21) and Kylian Mbappe (19) are the only players in Europe’s top five leagues to have registered more in 2021-22.

– Liverpool were behind to Villarreal for longer than they’ve been in every other game of 2022 so far combined. They still came back to win, of course.

– Since drawing to Chelsea on January 2nd, Liverpool have won 24 of their last 28 matches, losing just one. And of the four games they’ve failed to win, only one was of any consequence in their hunt for four trophies – the 2-2 draw away to Manchester City.