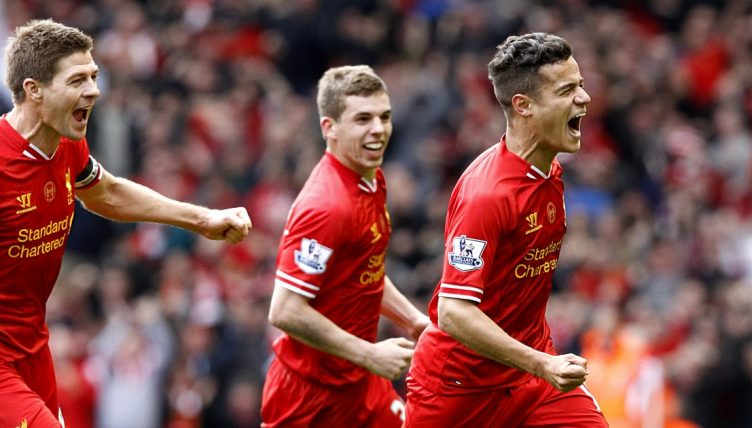 The message was loud and clear from Liverpool’s legendary captain Steven Gerrard as he addressed his team-mates on the Anfield turf at full-time: “We don’t let this slip.”

Liverpool’s surge for the 2013-14 Premier League crown was reaching its crescendo; Brendan Rodgers’ free-flowing Reds had one hand on the trophy thanks to Philippe Coutinho.

With five games of an enthralling campaign remaining, the two title favourites locked horns at a raucous Anfield, and the hosts edged out Manchester City in a five-goal thriller.

Two quick-fire first-half goals courtesy of Raheem Sterling and Martin Skrtel put the Reds firmly in the ascendency, before Manuel Pellegrini’s side restored parity in the second period.

But Gerrard’s infamous speech to the players he led so well would come back to haunt him. His costly slip two weeks later at home against Jose Mourinho’s Chelsea saw title aspirations dashed in the cruellest manner.

We’ve taken a closer look at Liverpool’s team from the blockbuster encounter with City in April 2014, to see what the group of players who recorded what should have been a historic triumph are up to now.

The goalkeeper signed for Liverpool from Sunderland for £9million in the summer of 2013.

It looked like Rodgers had worked wonders acquiring the Belgium international for that price when Mignolet produced a match-winning penalty save in the 2013-14 league opener against Stoke City.

But he struggled to build on a promising debut season, committing too many errors. Jurgen Klopp’s signing of Alisson Becker marked the beginning of the end of his time on Merseyside – he left for Belgian side Club Brugge in 2019.

The retired former England international scored an own goal to make it 2-2 at Anfield. In truth, this type of misfortune summed up the majority of Johnson’s six-year stay at the club following his arrival from Portsmouth in 2009.

Johnson showed qualities as a marauding full-back in his debut season under Rafael Benitez, but his powers quickly wained which saw him leave for Stoke at the expiry of his contract in 2015.

He saw out the remaining three years of a 16-year career at the Potters, and the 37-year-old now has his own investment business called Bed of Honey.

The 2013-14 runners-up season was arguably Skrtel’s best in his eight-and-a-half-year stay on Merseyside. His deadlock-breaking goal over City was one of seven Premier League goals he recorded that term.

The 37-year-old left the Reds for Fenerbahce in the summer of 2016 after he fell down the pecking order under Klopp.

Skrtel is now in the twilight of his playing days with Spartak Trnava is his homeland of Slovakia.

“Sakho is 23, but he is an experienced player, he has senior international caps and looks an absolute monster in training. He is one who is ready for now and that is what we want,” Rodgers said about the France international after securing his signature from PSG in 2013.

He was tipped to become a mainstay in the Liverpool side for years to come, but that soon changed when Klopp exiled him from the club’s pre-season tour of the United States in 2016.

Disciplinary misdemeanours were the reasons stated for the German’s decision. He permanently joined Crystal Palace in September 2017 following a successful loan spell at the Eagles.

The 32-year-old is now back in France with Ligue 1 outfit Montpellier. It was a career that promised so much but has so far delivered very little.

Now playing in the Danish first division with HB Koge, Flanagan’s time starring in Premier League matches for Liverpool feels like a lifetime ago.

“I then started seeing some news saying he is the Red Cafu! So there’s nothing better than coming to the city and taking a picture with my successor,” these were the words of legendary former Brazil international Cafu in May 2014.

Praise from a fellow full-back couldn’t inspire the 29-year-old to continue shining at the Reds. Various loan spells were followed by his permanent departure to Rangers in 2018.

Gerrard’s emotional reaction to the City victory was one of a man who thought he’d finally won the one trophy that had deserted him throughout a wonderful Anfield career.

But it wasn’t to be for Aston Villa’s current boss. If his managerial career is anywhere near as good as his playing years were, what a manager the 41-year-old will be – he’s already won the Scottish Premiership at Rangers’ helm.

The Aston Villa loanee was probably Liverpool’s most underrated attack-minded player in the swashbuckling squad Rodgers assembled in 2013-14.

His winning goal against City showcased the incredible ability that saw Barcelona pay a mega sum of €135million for the Brazil international’s services in January 2018.

In hindsight, it’s probably the best piece of business the Reds have ever done as they used the Coutinho cash to sign Virgil van Dijk and Alisson Becker.

The midfielder had a turbulent time in Catalonia but looks back to his best under former team-mate Gerrard’s stewardship at Villa this season.

Moses signed on a season-long loan with Liverpool in September 2013, but the Spartak Moscow winger didn’t flourish in a red shirt – Antonio Conte wasn’t his manager at Anfield after all.

Referee Mark Clattenburg sent Henderson off in the dying minutes against City for an over-exuberant late tackle.

If the England international was available for all of Liverpool’s remaining four fixtures that season, maybe the Reds would have had their desired fairytale ending.

Eight years on, the 31-year-old has captained Klopp’s team to Premier League and Champions League glory. Henderson’s place in Anfield folklore is well and truly secure.

Sterling was arguably the most promising English youngster around in 2013-14. His eye-catching finish past Joe Hart at the Kop end was one of nine league goals he bagged that term.

The England international broke the hearts of Liverpool supporters when he made a controversial switch to City in 2015.

“I said at the time, I felt like my ambitions and Liverpool’s ambitions at the time weren’t really aligned,” Sterling said in an interview in December 2021.

For all of the Reds’ success under Klopp, Sterling has won three Premier League titles in Manchester so you can’t really question his reasoning.

In contrast to Sterling, Lucas is still very much a darling of the Kop. The Lazio midfielder stayed for nine years at the club after signing from Brazilian side Gremio in 2007.

One of the great shames in football is that we didn’t get to see Sturridge replicate the amazing displays he delivered weekly under Rodgers in 2013-14.

Injuries robbed the 32-year-old from becoming a Premier League all-timer, and that’s why he’s currently plying his trade in the A-League with Perth Glory.

Allen was famously labelled as the “Welsh Xavi” by Rodgers on his arrival from Swansea City in 2012 – you were wrong, Brendan.

Despite being a decent squad player for Liverpool, an impressive Euro 2016 campaign with Wales persuaded Stoke City to pay £13million for the midfielder, where he remains six years on.

Suarez enjoyed one of the best individual Premier League seasons of all time in 2013-14, scoring 31 goals in 33 league appearances.

The striker then won four La Liga titles and a Champions League during his six years at Barcelona before moving to Atletico Madrid in 2020.