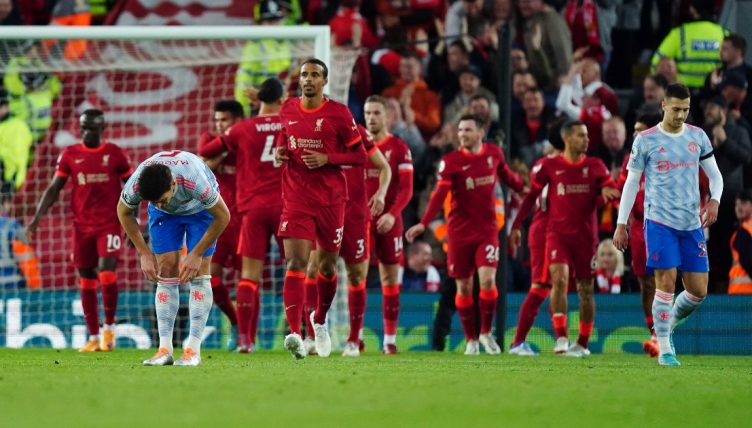 Liverpool underlined their superiority over Manchester United with a superb 4-0 thrashing at Anfield. Here, we’ve picked out 18 incredible stats that emphasise their dominance.

Jurgen Klopp’s Reds keep snapping at Manchester City’s heels in the Premier League title race, and remain hopeful of an unprecedented quadruple after another big win over their biggest rivals.

Former United heroes like Roy Keane and Gary Neville spoke of their pessimism about the Red Devils getting a result on their visit to Merseyside, and it took just four minutes for their worst fears to be realised.

Luis Diaz opened the scoring early on after Mohamed Salah ripped through the United defence. Salah doubled Liverpool’s lead in the 22nd minute, putting the finishing touch to a sensational Liverpool move that came during a ridiculously dominant first half.

The visitors came back into the game after the break, but couldn’t find a way past Liverpool’s defence, and once again Klopp’s men showed a ruthless edge as Sadio Mane got in on the act before Salah added the gloss with his second and Liverpool’s fourth in the closing stages.

“I don’t expect us for 95 minutes to be completely in charge of the game. I think we were for 65 to 70 minutes, and for 20 minutes United caused us a bit more problems,” was Klopp’s post-match analysis in his interview with Sky Sports.

“First half, we were really, really in charge of the game. You wish you could pick it up again from there, but it is 15 minutes break and we needed 15 minutes to be ourselves again. Our counter-press was second to none. A really good game, wonderful goals, everyone is happy.

“United is not in a good moment, but they will come back. As for our fans, they can enjoy it.”

United boss Ralf Rangnick predictably had a different demeanour and pulled no punches when it came to his assessment.

“They showed what calibre they are. We are not up for it, we are not good enough to get points in a game against Liverpool,” Rangnick told Sky Sports.

“They are one of the best teams in the world. We are far away from that. We are not physical enough, or athletic enough. I am pretty sure the players in the starting XI knew the importance of that game, but in order to get something out of a game like this, you have to attack them and cause them problems.”

Here are 18 outstanding statistics and records from Liverpool’s historic 4-0 mauling of Manchester United.

– Salah is also only the second player to score and assist home and away against United in a Premier League campaign. The only other was Mesut Ozil, back in 2015-16 (via @OptaJoe).

– Liverpool’s front three of Mane, Diaz and Salah all scored and assisted in the victory. The only other time that three players have done that in one match this season was during Liverpool’s 5-0 win at Old Trafford in October. Salah, Naby Keita and Diogo Jota did that time.

We scored at Anfield this season. You didn’t. Levels. https://t.co/ttqZAfLnpj

– The nine goals they’ve scored against United in 2021-22 are more than they managed in 14 Premier League meetings against Ferguson’s side in the seven seasons between 2001 and 2008 (via Daniel Storey).

– The 9-0 aggregate defeat to Liverpool represents United’s worst over two games to any opposition in Premier League history. The next-worst are aggregate 7-1s to Manchester City in 2011-12 and 2013-14. The next biggest difference between the two clubs in history was a five-goal margin.

9 – Manchester United have lost 0-9 on aggregate in their Premier League meetings with Liverpool this season. In their league history, they’ve only suffered a combined heavier defeat once – 0-11 vs Sunderland in 1892-93. Trounced. #LIVMUN pic.twitter.com/ot2bQCn1Er

– David de Gea has conceded four goals at Anfield in 2022. That’s one goal every 22.5 minutes. That’s four times as many Premier League goals as Alisson has let in this calendar year – just one from seven matches, or one every 630 minutes (via the reliably excellent @RichJolly).

– Liverpool’s four-goal haul was twice as many goals as Manchester United have scored at Anfield during Jurgen Klopp’s reign. The Red Devils have only scored twice away at Liverpool in eight trips during the German coach’s time in charge.

– Manchester United have now conceded 48 goals this season. That’s three more than Burnley, who sit 18th in the table and look doomed for the drop.

– Manchester United registered 0.00xG (expected goals) in the first half. That’s right; they failed to even attempt a shot in the opening 45 minutes. That’s the first time they’ve failed to do so in a half of football since April 2018 against Manchester City.

– Their eventual xG of 0.12 is their lowest of the season, seven times lower than their next worst against Manchester City last November. It’s also United’s worst xG output since such data began being recorded.

– Dating back to when Opta started collecting the stats in 2003-04, only four players have completed 100 passes or more in a Premier League match against Manchester United. Two of those were Thiago Alcantara (104) and Virgil van Dijk (106) in the 4-0 thrashing. In contrast, United’s top passer was Nemanja Matic – the Serbian completed 33.

– There were 25 passes and 77 seconds of unbroken Liverpool possession in the build-up to Salah’s first goal. Van Dijk was the only Reds player not to register a pass in the move.

– Not only did defensive midfielder Fabinho have more shots (one) than United in the first half, he also registered more touches in the opposition box (three to two).

– Thiago played three key passes – the final pass before a team-mate shoots at goal – which was more than United managed all game (two).

– Van Dijk and Thiago registered more than double the touches of any opposition player with 125 and 132 respectively. Bruno Fernandes touched the ball 61 times – the most of any United player.