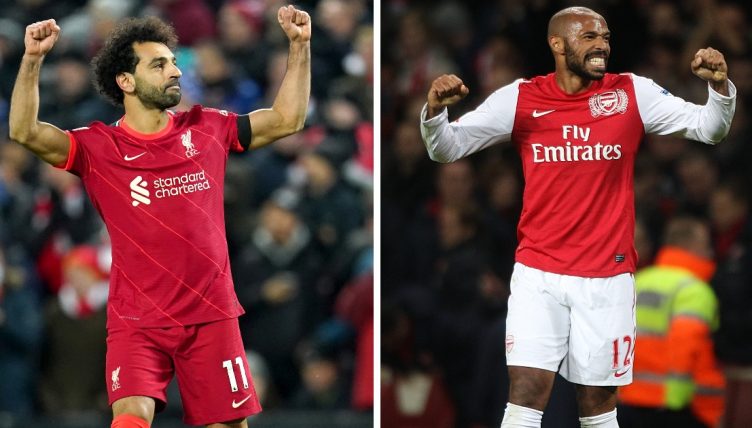 Arsenal legend Thierry Henry is considered by many to be the greatest Premier League player of all time – but Liverpool’s Mohamed Salah has arguably reached a similar level in recent years.

Salah is currently well on track to win a third Golden Boot in five years. He’s played a pivotal role in Jurgen Klopp’s Reds picking up silverware since his arrival from Roma in 2017 and there’s every chance they go on to lift more trophies before the end of the season – they’re still in the hunt for a historic quadruple.

But how does his record at Liverpool compare to a bonafide legend like Henry? Their records in terms of goals and assists are actually remarkably similar.

Henry was at Arsenal for longer, but if Salah signs a new contract and remains at Anfield past 2023, some of the Frenchman’s records could even be under threat.

The former Arsenal goalscorer is a fan of Salah’s and has backed him to become the best player in the world if he can keep up his current standards.

“I think that Mo Salah, right now, is just scary. But that’s the past three to four months,” Henry told GQ in December.

“So, is he on his way to be that [the best player in the world]? I believe that, but he needs to maintain that. What I like about him now is, he’s happier to share the ball earlier.

“So now he needs to know that he has to make players play better. He’s doing that and I love that about him this year. I already used to love the way he finishes, the way he scores his goals.

“Now he likes to share, and that’s when I’m like, uh-oh. Hang on a minute. He’s changing.

Here’s how Salah’s record at Liverpool and Henry’s record at Arsenal compare when you break them down.

The fourth time in five seasons with the Reds he has reached that figure 🇪🇬👑 pic.twitter.com/wsUQXlYMNe