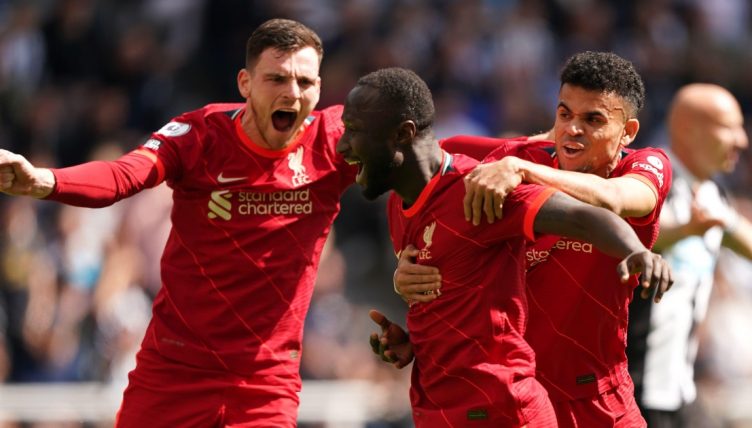 Liverpool continued their push for the Premier League title with a deserved 1-0 win at Newcastle on Saturday lunchtime.

Jurgen Klopp’s side travelled to the North East looking to return to the top of the league table against in-form opponents.

And the Liverpool manager chose to rest important players such as Trent Alexander-Arnold, Fabinho and Mohamed Salah before Tuesday’s Champions League semi-final second leg against Villarreal.

After a fast start, Newcastle struggled to live with their opponents and Naby Keita scored the early winner after dancing through the Toon defence and finishing with the certainty of a First World War sniper.

And the 2020 Premier League champions saw out the remainder of the game in relative serenity to secure a vital three points.

Klopp hailed his squad depth after an “absolutely outstanding” performance from a heavily-rotated side kept their quadruple bid on track.

“It’s the most difficult of circumstances,” Klopp told BT Sport. “A team in form, a crowd waiting for ages for proper success, now they’re having some. Coming here with five changes and building pretty much a new setup is really difficult, so the performance was absolutely outstanding. I loved it. We controlled the game in so many ways.

“Our people were outstanding and Newcastle are obviously a really passionate crowd. Winning here is special.”

– Liverpool’s victory on Saturday was their 42nd of the 2021-22 campaign and the most wins they’ve ever achieved in a single season in their illustrious history.

Liverpool take the lead and the Newcastle fans aren't happy, but it looks like James Milner got his challenge just right… pic.twitter.com/1gdngbRXmb

– Their winner on Tyneside was scored by Naby Keita, his fourth goal of the campaign. Liverpool have won everytime the midfielder has scored this year.

– It was another clean sheet for Alisson, who became the first goalkeeper in Europe to achieve 20 shut-outs for the season.

– And it was a successful day for the Liverpool defence in keeping an in-form Newcastle quiet. Klopp’s side have trailed for just 53 out of 2520 minutes of football in 2022.

– For the first time under Klopp’s management, Liverpool won a lunchtime kick-off three days after a European match. It was their fourth attempt at doing so.

– Liverpool’s chances of the quadruple were enhanced with their victory at St James’ Park – and they are now the side whose hopes of winning four trophies have lasted the longest. The Chelsea side of 2006-07 saw their hopes end on May 1 after losing at Anfield in the Champions League semi-final.