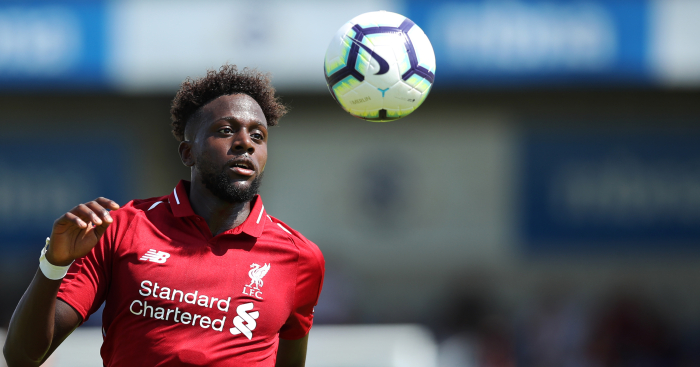 Jurgen Klopp has revealed he wants to trim down Liverpool‘s squad ahead of the start of the 2018-19 campaign.

Reports suggest the likes of Divock Origi, Loris Karius, Danny Ings and Simon Mignolet are facing uncertain futures at Anfield with Klopp willing to let up to 10 players depart the club.

“When all the players are back the squad is big, so it is clear they all need opportunities to play,” Klopp told liverpoolfc.tv.

“The ones who are very young, we don’t think about it; they are in absolutely the right place now and if they can play with us or the under-23s, it is perfect.

“Then of course, it is clear there are always requests from other clubs and we need to stay open for that.

“In the end, it makes no sense to have 35 players in the squad because developing players means they have to feel needed; they need to see ‘in this or this situation, I can play in the team’ and all that stuff.

“I am pretty sure a few things will happen, but exactly what time will show.”

But what exactly is the optimal size for a squad of players competing on four fronts – as Klopp’s men will be doing this season?

The Reds used 29 players in all competitions last term, but the likes of Nathaniel Clyne, Danny Ward and Ben Woodburn had peripheral roles, while Origi and Jon Flanagan appeared only once before leaving on loan.

And having significantly improved their strongest XI over the summer, signing Naby Keita, Fabinho and Alisson, Liverpool can afford to let bit-part players move on. Xherdan Shaqiri has been bought in, too, to add stronger competition.

Throw in their run to the Champions League final, and expectation is building that Liverpool could seriously challenge on all fronts this season.

History certainly backs up Klopp’s belief they can get by with a smaller squad.

The average amount of games played by a Premier League title-winning team involved in European competition over the last decade has been 57, which is just one more fixture than the Reds played last term due to their early exits in both domestic cup competitions.

Yet Klopp actually used two more players than history suggests is necessary for a title-winning side, with the last nine Premier League champions to also be involved in the Champions League using 27 players on average.

Focusing on solely the Premier League, 21 Liverpool players made 10+ appearances in the competition last season, which is more than seven of the past nine champions who were also involved in the CL, further strengthening Klopp’s case to let some fringe men move on.

Perhaps a more important factor which should be taken into account is the impact injuries have on a squad’s make-up.

Last season Emre Can, Joel Matip, Nathaniel Clyne, Joe Gomez and Adam Lallana all suffered at some stage with long-term injuries, while Alex Oxlade-Chamberlain is already expected to miss the entirety of 2018-19.

Some critics – most notably Raymond Verheijen – suggest Klopp’s methods increase the risk of injury, but Liverpool’s head of medical services Andy Massey suggests that is becoming less of a problem.

“Jurgen’s philosophy is very much that we’ve got to run further, run faster, run quicker than every other team because if we can do that then the skill will take over,” he told the Liverpool Echo.

“So we’ve got to put the players in a position where they can do that. When Jurgen first came into the club, we tried to put that in there, but the boys weren’t up to that physical level yet to meet the demands.

“At one stage, we had 13 hamstring injuries but now, with the benefit of two pre-seasons, we’re seeing the boys work so much harder and they look like they’re more protected.”

Former physio Andy Renshaw expaned on this in a 2017 interview with ousingthekop.com: “I started in July 2016, and during that season we reduced preventable (non-contact, soft tissue) injuries by 63% compared to the season prior.