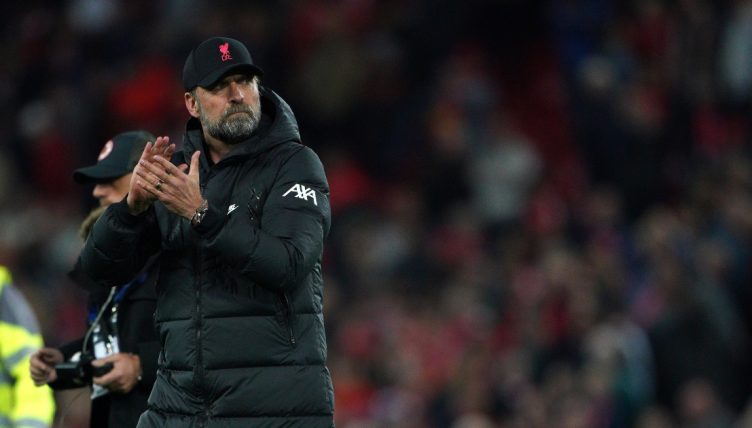 The chances of Liverpool winning a historic quadruple were dealt a hammer blow over the weekend, having dropped two points in the Premier League title race. But we still think there’s reason to believe they can come back and become champions of England.

Jurgen Klopp’s Reds are now three points behind Manchester City with three games left to play, following their 1-1 draw at home to Tottenham on Saturday night.

City took advantage of the slip-up in style, ably swatting aside Newcastle with a 5-0 victory to keep themselves in the driving seat.

Liverpool can still complete a historic campaign, with the League Cup already in the bag and two more finals to come. But they’re relying on a rare slip-up from Pep Guardiola’s side if they’re to lift the Premier League trophy on the final day.

They’ve been here before. Back in 2018-19, Liverpool pushed City all the way – but Guardiola’s men won each of their last 14 league matches to retain the title. So fans in Merseyside can be forgiven for being a little pessimistic about their chances – City are now priced at 1/10 on to finish top, after all.

But all hope shouldn’t be lost just yet. Here are seven reasons why Liverpool could still win the title.

Reigning PFA Player of the Year Ruben Dias, John Stones and Kyle Walker will play no part in City’s remaining three games, Guardiola announced after the victory over Newcastle.

Admittedly, City have no shortage of depth in their defensive areas, and their emphatic victory over Newcastle showed they can still be formidable with the likes of Oleksandr Zinchenko and Fernandinho slotting into the backline. Aymeric Laporte and Joao Cancelo remain fit and firing, too.

Still, it’s less than ideal circumstances in the run-in for Guardiola, who has fewer options for rotation. They can’t afford to get any more defenders injured.

Guardiola’s City have failed to win on two of their three visits to Molineux.

Laporte and Willy Boly were the two goalscorers in a hard-fought 1-1 draw for newly-promoted Wolves back in August 2018, while the following year Nuno Espirito Santo’s side came from two goals behind to win 3-2 against 10-man City after Ederson’s early red card.

Wolves remain the kind of side liable to ask questions of City. Tottenham completed a league double over the league leaders with their a three-at-the-back formation under Nuno and Antonio Conte, and that remains Wolves’ shape under Bruno Lage.

Expect a low block that looks to frustrate the visitors. It’s easier said than done, but it can work if implemented well – as with Patrick Vieira’s Crystal Palace, the last side to stop City scoring, back in March.

The Wolves captain hails from Merseyside, grew up in a household full of Liverpool fans and originally came through the academy at Melwood.

Coady has always laughed off suggestions of an Anfield return and insisted he has no divided loyalties when he plays against his boyhood club. It’s clear that he’s Wolves through and through now, but that doesn’t mean it wouldn’t be extra sweet for the centre-back to do his old club a favour.

The England international’s also got form for being a thorn in City’s side. He scored at the Etihad last season and played every minute when Wolves did the league double over Guardiola’s men in 2019-20.

David Moyes has an infamously poor record away at ‘the big six’, but he’s capable of causing upsets on home soil.

Indeed, Liverpool fans know that all too well – their 3-2 loss at the London Stadium back in November is one of only two Premier League defeats they’ve suffered all season.

Having had a taste of Europe, the Hammers will be desperate to claim six points from their final two remaining fixtures to leapfrog Manchester United to Europa League qualification in sixth place.

It’s been a long and gruelling season, having juggled their domestic commitments with a run to the Europa League semis. They’ve lost six and drawn three of their 12 league outings immediately after midweek European action.

Out of Europe now, City can take their full focus. They’ve got a full week to prepare for this one, unlike the visitors. And Moyes’ men looked re-energised in their 4-0 victory at Norwich on Sunday.

Aston Villa are comfortably in mid-table and will surely have nothing to play for but pride come the final day of the season.

But you can be sure that Steven Gerrard will do everything in his power to get his players highly motivated when they visit the Etihad on May 22.

The former Liverpool captain has made no secret of his ambitions to one day succeed Jurgen Klopp in the dugout at Anfield – and his CV would be all the more impressive if he’s able to get one over City and potentially gift-wrap the title to Liverpool in the process.

Liverpool also play Villa in their run-in. You can’t imagine those three points are quite as attractive to Gerrard.

Recent maulings over Newcastle, Leeds and Watford have seen City overhaul Liverpool’s goal difference to move four ahead of the Reds. They could potentially lose one game and still win the title on goal difference.

But a defeat for City would see that swing to two or fewer. Liverpool boast three of the Premier League’s top five goalscorers in 2021-22 – plus January signing Luis Diaz – and are surely capable of notching up plenty of goals if the title race ultimately comes down to a straight shootout.

44 goal contributions in 44 games this season 🔥

Mo Salah is the Football Writers’ Association Footballer of the Year for 2022 👑pic.twitter.com/tBWPWWOxeX

Guardiola’s City can’t be accused of lacking mettle when it comes to the Premier League. No side in English football history has accrued points at the rate they have in recent years.

In 2018-19, they needed to win their last 14 games to pip Liverpool to the title. They did just that, including a 4-1 comeback victory at Brighton on the final day.

With that precedent, in all likelihood they’ll do it again. But you never know. They outplayed Real Madrid for the vast majority of their Champions League semi-final, yet still – somehow – lost. The beauty of football is that one side can have 70% possession and outshoot the opposition by a ratio of 10:1 and still lose. Freak results happen.

Ten years on from Aguero’s title-clinching goal against QPR, could the gods of football deliver a much crueller fate for City this time around?