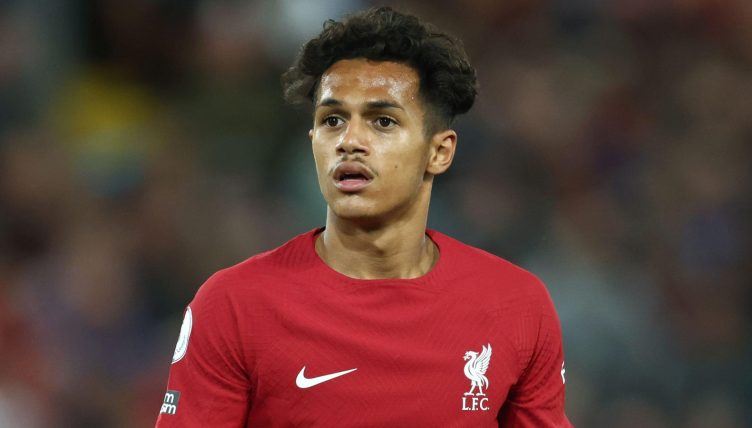 Football Manager 2023 is out now and we’ve dived into the database to find every wonderkid attached to Liverpool.

The Reds are certainly no strangers when it comes to fielding young stars, with Jurgen Klopp giving minutes to a number of hot talents during the early stages of the 2022-23 season.

After delving through FMScout, we’ve found the 11 wonderkids from Liverpool that you should be on the lookout for.

Signed as a highly-rated prospect from Eredivisie side PEC Zwolle in the summer of 2019, 6’2″ centre-back Van den Berg has had to be patient for opportunities at Anfield despite a glut of defensive injuries.

After spending 18 months at Championship side Preston North End, the Dutchman is currently with Bundesliga sleeping giants Schalke as Klopp readies him for Premier League football.

With an FM ceiling of 79, Van Den Berg has the potential to be a useful squad player for Liverpool in the future.

Koumetio was handed his senior debut by Klopp as a half-time substitute for Fabinho as Liverpool played out a 1-1 draw in the Champions League against FC Midtjylland in December 2020.

Further opportunities haven’t really come Koumetio’s way and he’s currently spending the 2022-23 season at Austria Wien. But, with Virgil van Dijk entering the autumn of his career, he’s a centre-back worth developing.

Currently thriving on loan at League One heavyweights Bolton Wanderers, Bradley has impressed the scouting staff at Liverpool with his 2022-23 performances.

“Conor is doing really well. It’s a brilliant move for him, it’s a great place to go and play,” chief scout Graham Hunter said about the Northern Ireland international.

“He’ll play games, get minutes and play regularly, he’s settled straight in. Conor’s a great boy, great family and he’s got a big future in the game.”

He’s got a FM ceiling of 80, meaning he’s a player that’s definitely worth investing your virtual time into.

Ramsay, who joined Liverpool from Aberdeen in a £4.2million deal over the summer, is the latest Scottish full-back with a big future in the game.

The 19-year-old won the Scottish Young Player of the Year award last year and will undoubtedly learn a lot from fellow full-backs Trent Alexander-Arnold and Andy Robertson at Anfield and should be an integral part of your Liverpool squad on FM 2023.

👀 Calvin Ramsay back when he was with the Aberdeen U13s! pic.twitter.com/rKVHLBOhQU

Morton has come through the Reds academy and made his first-team debut in September 2021 after starring for the Under-18 and Under-23 sides.

The 20-year-old has since acquitted himself well in Champions League group stage wins over Porto and AC Milan, showcasing his impressive passing range and composure.

“It was a big pleasure to watch the boy playing,” Klopp said after the 2-1 win at the San Siro. “The football knowledge, the football brain he showed tonight was absolutely exceptional.

“If you are technically on that level – and he obviously is – and you then have such good orientation, then sometimes we have enough time to do good stuff.”

Morton is spending the current campaign at Blackburn Rovers and has impressed the regulars at Ewood Park with assured performances from midfield. He could well be Fabinho’s replacement at Anfield.

Bajcetic predominantly plays as a centre-back but has also showcased his versatility by playing as a defensive midfielder, where he sprays passes around and dictates play from deep.

“He is doing really well,” Liverpool Under-19s manager Marc Bridge-Wilkinson said after a 4-0 win over Porto in the UEFA Youth League last season.

The Spain Under-18 international became the youngest Liverpool player to make a Champions League appearance after his cameo against Ajax in September and the future is clearly bright for him.

Never mind Liverpool, Elliott is one of the highest-rated wonderkids on FM 2023 full stop. The boy is going places…

That pass from Salah though 🤌

Doak has been a revelation since joining Liverpool from Celtic earlier this year – which hasn’t surprised those who charted his progress in Scotland.

“I first came across Ben when he was probably aged 12,” Scotland under-17 manager Brian McLaughlin told the Liverpool Echo last month.

“He came on the radar at the Scottish Football Association as a player with massive potential. First, we kind of got to know him when he was playing with Celtic and their academy at the time.

“He wants to take players on, he wants to be really, really positive and as long as he keeps that character and reminds himself of what his major strengths are, we’ll try to encourage him. He’s a different type of player to anybody who has come through recently, his athleticism alone is different.”

It’s no surprise that he’s been given a ceiling of 87 by the Football Manager developers; Doak has all the potential to become an exceptional talent.

“Kaide is a fantastic player. I brought him into the squad because he was showing the qualities I want,” Wayne Rooney said when Gordon left Derby County for Liverpool in 2021.

And, despite his current injury, Gordon has impressed during his four Liverpool appearances to date. He’s worth keeping an eye on.

Clark made his professional debut during the 9-0 thrashing of Bournemouth in August 2022, becoming the first player born in 2005 to make his Premier League debut. We’re almost dead.

Another inevitable inclusion on this list, Carvalho has impressed since his summer move from Fulham and has an FM ceiling of 82.

“When we watched him it was a pure joy to watch him, absolutely,” Klopp said at his unveiling. “He can play so many different positions for us, the way we play.

“At the minute he’s not really set on one position – it’s the wing, it’s the eight, it’s the 10, it’s the false nine if he grows a few more muscles.

“It’s a short-term and a long-term project; he can start tomorrow and he needs to adapt, you can see that a little bit, but when he has the ball that’s proper quality. I’m over the moon that he’s here. Fantastic prospect.”

A special moment you'll want to watch again and again…

READ MORE: An XI of the best wonderkids to sign on FM 2023: Elliott, Endrick…