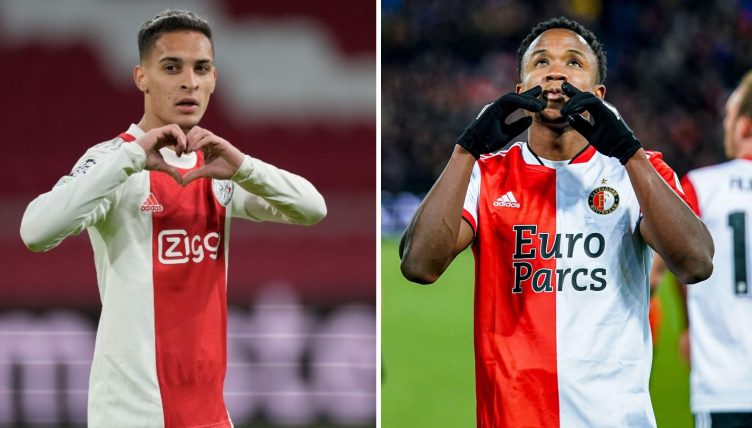 Leeds United and Manchester United have brought two of the Eredivisie’s outstanding wingers, Luis Sinisterra and Antony, to the Premier League this summer. But how do the two players compare?

Sinisterra arrived at Leeds back in July. He joined Jesse Marsch’s side from Feyenoord for a £21million fee. The 23-year-old Colombia international has signed a five-year deal at Elland Road.

Raphinha’s replacement missed most of pre-season with his new club with injury but looks to be getting up to speed now. Sinisterra has scored on each of his first two competitive starts for the Whites, both from outside the box, with a piledriver against Barnsley followed by a well-placed effort in his full Premier League debut, a 1-1 draw at home to Everton.

“It’s not about repaying me. It’s about his ability, he will show more and more his ability, right?” Marsch told reporters after the Colombian’s first Premier League goal.

“He’s a special player, and he has a special combination of athleticism and power with football and cleverness, and then finishing ability so I think it’s just – it’s obviously, I’m really happy for him to get on the scoring sheet and I think he’s only going to get better.”

Manchester United’s deal to sign Antony, meanwhile, was finally completed in the final days of the transfer window. The Red Devils have spent all summer chasing the Brazilian, and finally got their man, the second player to follow Erik ten Hag from Ajax to Old Trafford after Lisandro Martinez.

They’ve had to pay a considerable fee to secure his services. At £85million, he’s more than quadruple the cost of Sinisterra and is a record sale for an Eredivisie club.

Antony missed a portion of last season through injury but dazzled with his skills when fit. He’s now a regular in Tite’s Brazil squads and looks set to feature for the Selecao at the World Cup in a couple of months’ time.

The 22-year-old won Olympic Gold last summer and has helped deliver the league title in each of his two full seasons at the Johan Cruyff Arena.

“[In his younger days in Brazil] He was picking up the ball and cutting back in onto his stronger foot and he would take away the momentum of the attacks. You were thinking at this point: raw.

“But Ten Hag got him and developed him into a quick little winger who can play on either flank, whose decision-making is greatly improved and who can also work back and put in a bit of a shift. So, as soon as Ten Hag went to Manchester United, I thought, well, Antony is his man.”

But how do Antony and Sinisterra compare? We’ve taken a look at their stats in the Eredivisie in 2022-23 to see how they stack up against one another.

Chested the ball down and unleashed it!

Luis Sinisterra with a ridiculous strike for Feyenoord 🚀#UECL pic.twitter.com/D74VNCssF3

Antony’s dribbling is some of the best in Europe when it comes to volume per 90 and successful dribble %. The ball sticks to his feet and his overall decision making in the action is brilliant. He has the perfect balance of a top tier dribbler. pic.twitter.com/YzYJtDXlJn