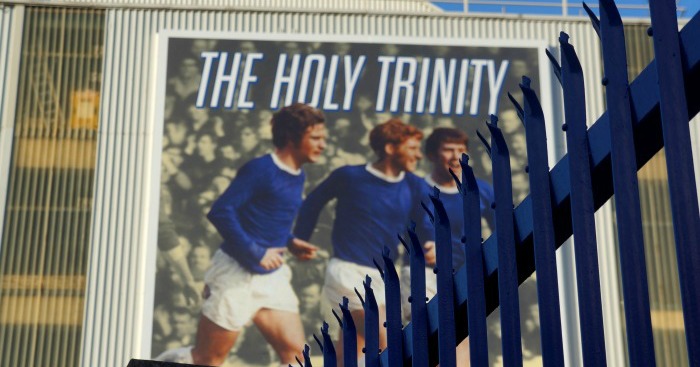 Goodison Park is my favourite place to watch football in the whole world. And I’m not even an Everton fan.

There was a time when every ground (not stadium) was like Goodison Park. These homes of football were industrial structures made of nothing more than house bricks and steel cross-members, thrown up as cheaply as possible around the lush green turf in the middle.

Row upon row of terraced houses would sit around them for company and a lick of gloss paint in club colours was the only nod to aesthetics (if the chairman put his hand in his pocket).

You don’t need this series to tell you that most clubs have abandoned their traditional homes and moved to plastic bowls on retail parks. Everton will do it at some point, too.

That means we’ve got to enjoy Goodison as much as we can, while we can. Its looks, its sounds, its feel, its smell. It’s one of the last of a dying breed. I can’t do much for you on sounds or smell, but I can certainly have a go at looks and feel…

1) Tea time down the Goodison Road 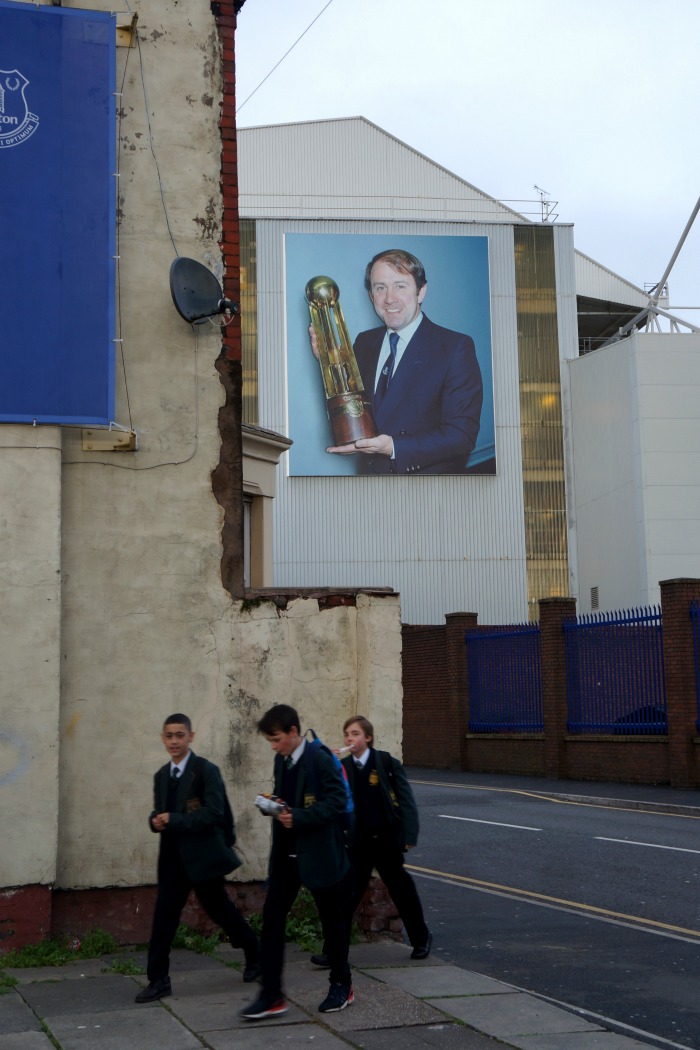 Actually, bear with me for just one photo. Firstly, welcome to Everton, a suburb of the city of Liverpool. Life runs pretty much as you would expect round this collection of terraced streets. Ordinary working class folk live ordinary lives, except they’ve got an extraordinary football club living next door.

Everton call themselves ‘The People’s Club’ and being so close to them, they would struggle to be anything but. Howard Kendall is one of the finest Evertonians of them all. When he passed away his picture was put high above the houses for all to see. No one complained. 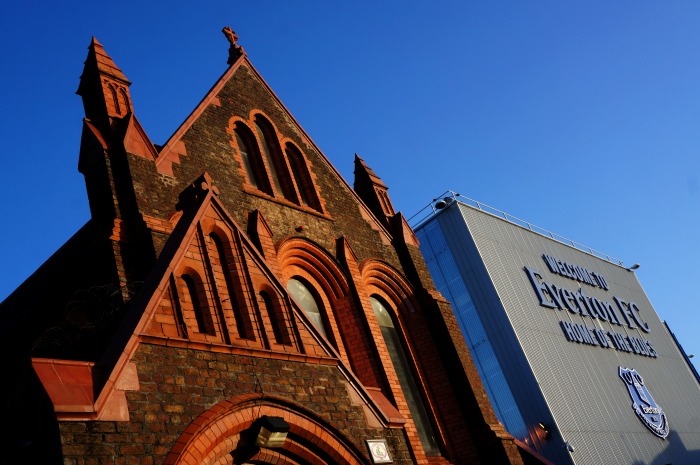 And there we are. Mystery solved. Now I welcome you to the parish of St Luke’s. Goodison Park is in the church yard. The roof of St Luke’s can be seen in the corner of the Gwladys End, a constant and welcome reminder of how close Everton are to their community.

Naturally, the light was perfect and the sky a beautiful Everton blue when I went to visit. The vicar at St Luke’s has friends in high places.

3) The other Holy Trinity 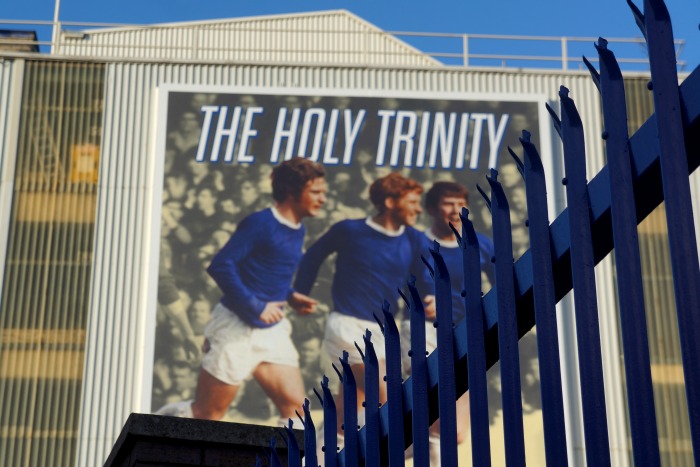 And the Vicar isn’t daft. He knows that next door the blue lot worship a different set of gods. Kendall, Ball and Harvey. The greatest midfield trio to grace this corner of the football world. They put their heroes large round these parts.

As the Everton song goes, if you know your history, it’s enough to make your heart go ‘woah’. Indeed. 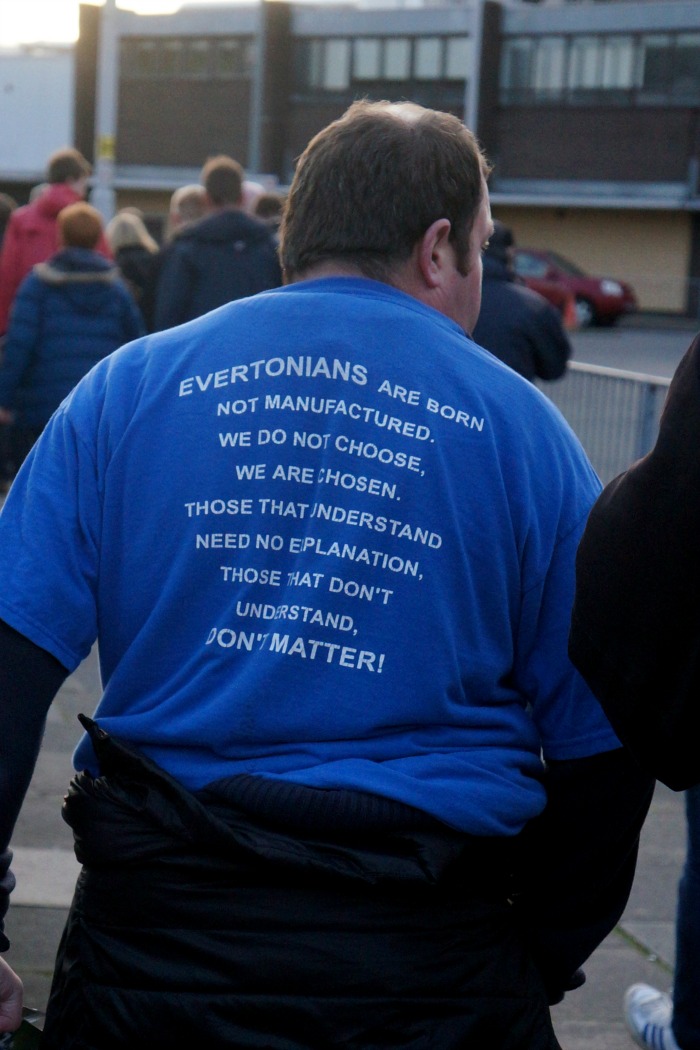 On a matchday the congregation come together. You sense there is a pride in Evertonians that have not had a choice on their football club. You sense they would tell you that persons choosing a football team to support of their own free will is what happens at the red club up the road.

Down this end of the Stanley Park the football club chooses the Evertonians. Fathers, brothers and childhood mates seem to be the ones who suck the selected few in. Pride in their club keeps them coming back. 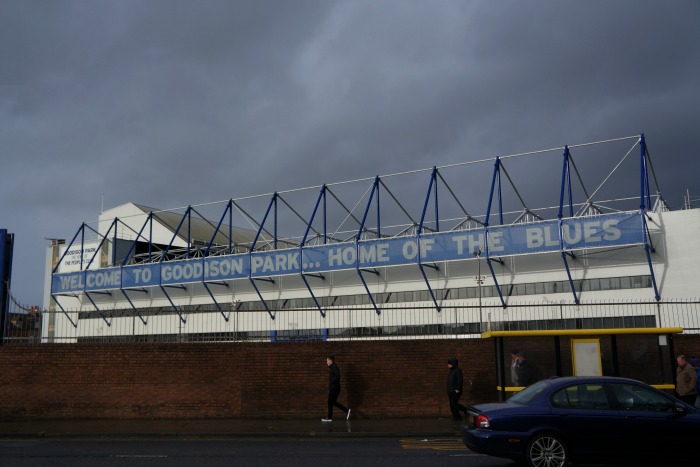 There’s time to kill before kick-off comes and brings this place to life. I always take a walk and see where the club lives. I love this photo because it’s so bloody normal.

Bus stop right by the ground. Proper brick wall separating the club from the road. Just beyond the wall, the back of the stand. A bit of modern window dressing but we’ll forgive them that. Then, just sneaking into view, the chimney pots of the Everton terraced houses. 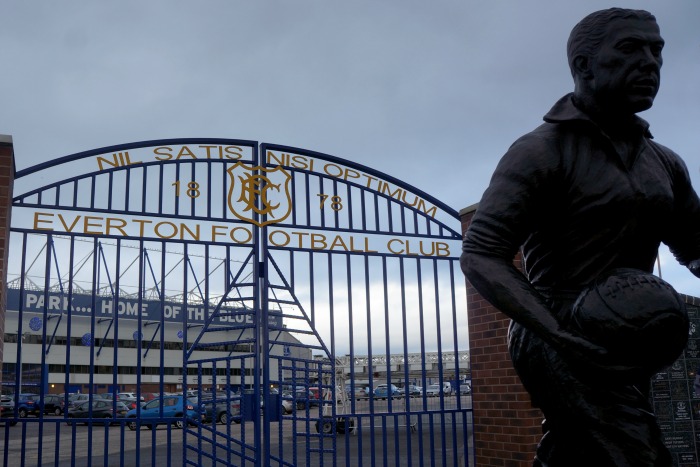 This guy didn’t do normal though and that is why he is the focal point of the main entrance to the club. Dixie Dean scored 60 league goals in 1927-28 and 18 in 16 England appearances. You can go on about how we can’t compare eras all day, but the bottom line is no one has come close in the last 90 years.

Make no mistake, whilst their ground may now be showing its age. This football club has dined at the top table of English football throughout its history. If you’ve produced the goods in Everton blue, chances are you’ve reached the very top.

7) European nights down the Bullens Road 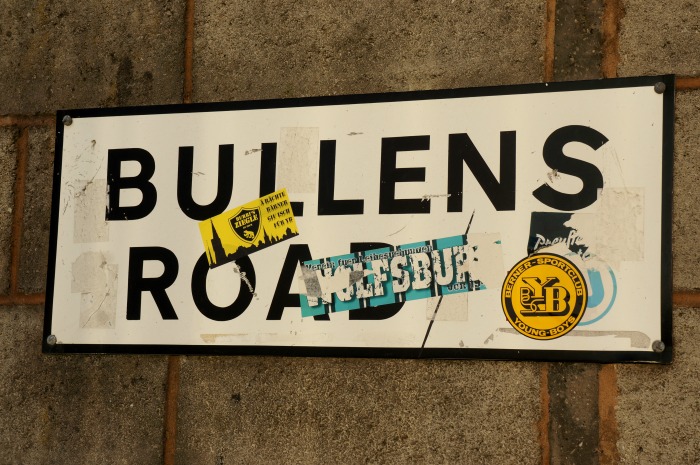 And they come from far and wide to worship at this holy spot. The sign on the Bullens Road, six-and-a-half days a week nothing more than a suburban residential street, shows the markings of welcome European nights under the lights.

Some might say that the defining era for this football club was during the European ban on English clubs in the 80s. Howard Kendall had built one of the finest sides in Europe at that time and the ban took their chance to compete away.

There is no such barrier now though and the investment is beginning to come again. Which club stickers will be on this sign in the next couple of years? Everton fans will already be dreaming I’m sure. 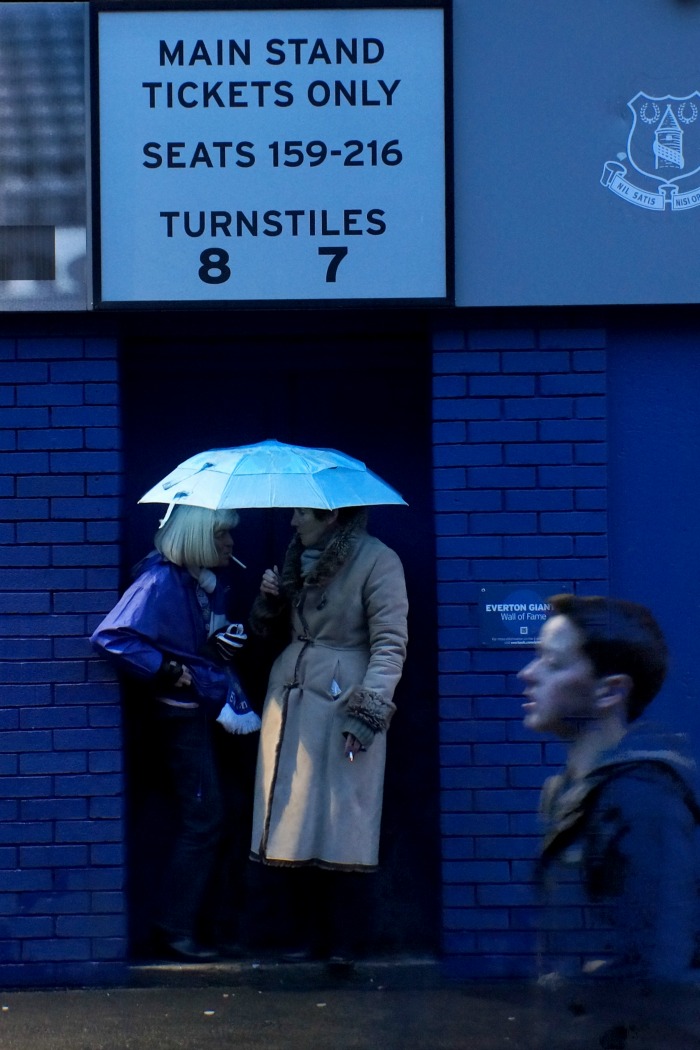 Then the sun goes down. What an atmosphere this place has of a night match. The floodlights provide the perfect lighting as the people flock to this outpost of the city. It’s like the set of blade runner. Wet, dark and miserable but at the same time neon, vibrant and edgy.

These two women were just too much of a stereotype, sneaking a fag in whatever dry spot they could find. Perfect. 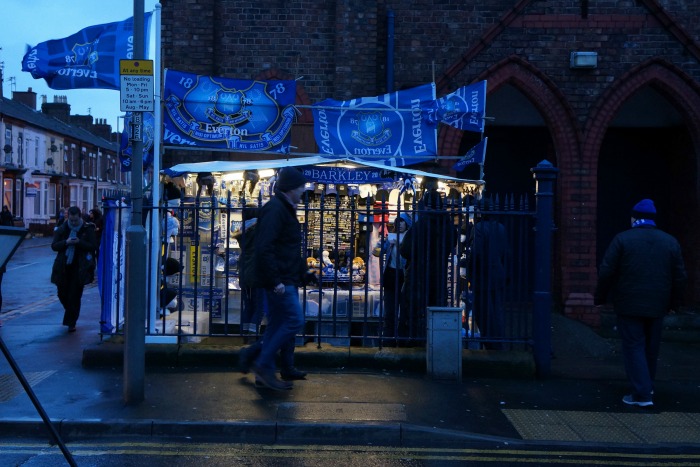 St Luke’s gets in on the whole night time carnival act too. The whole community does. This is Everton, in Everton. What else would you do on a Tuesday night? 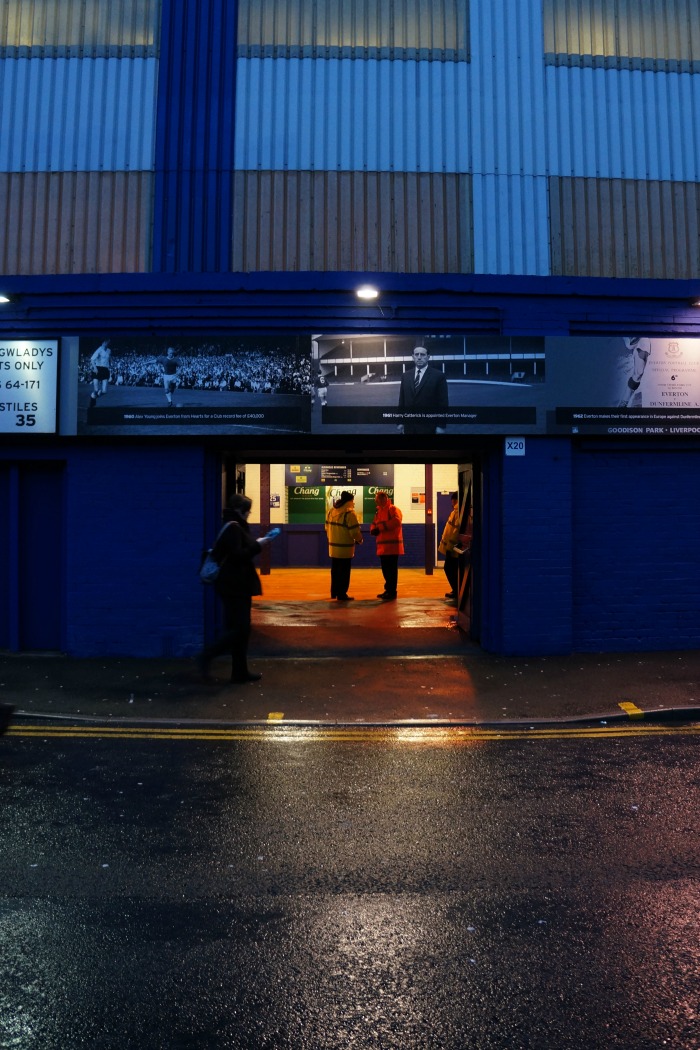 And so it’s time to go in. Walk into the light, don’t worry, it’ll be biblical, I promise. 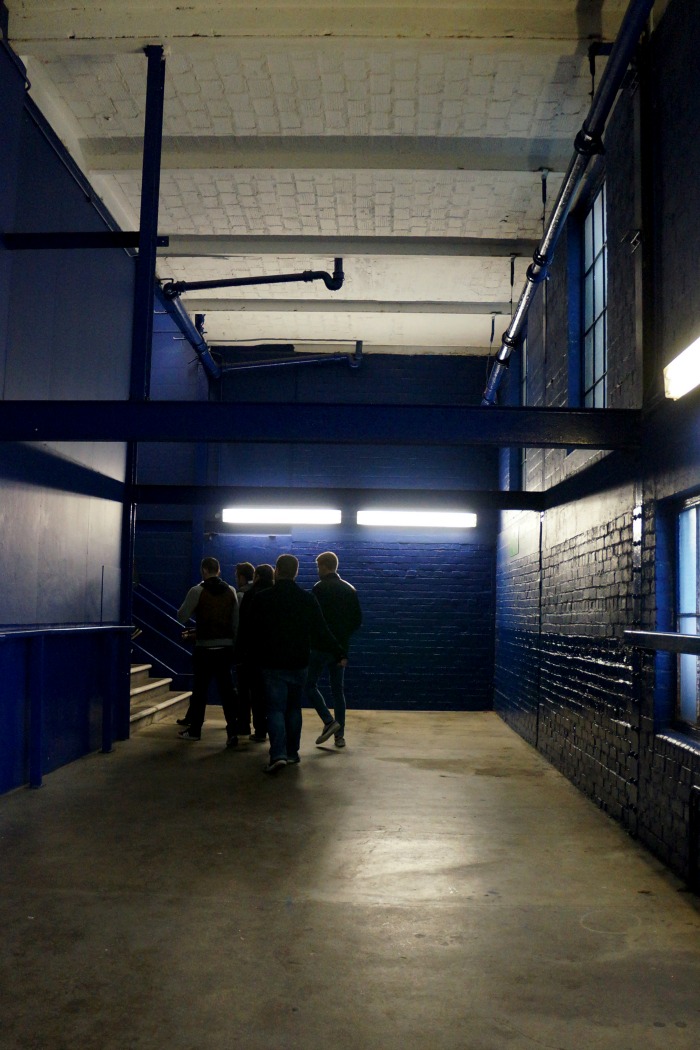 Eventually….we won’t see the pitch for a while. There is no brightly lit, light and airy concourse here and how wonderful is it as a result? Do you remember when football grounds were always this atmospheric?

Keep walking, it’ll be worth it.

12) The beauty of Archibald Leitch 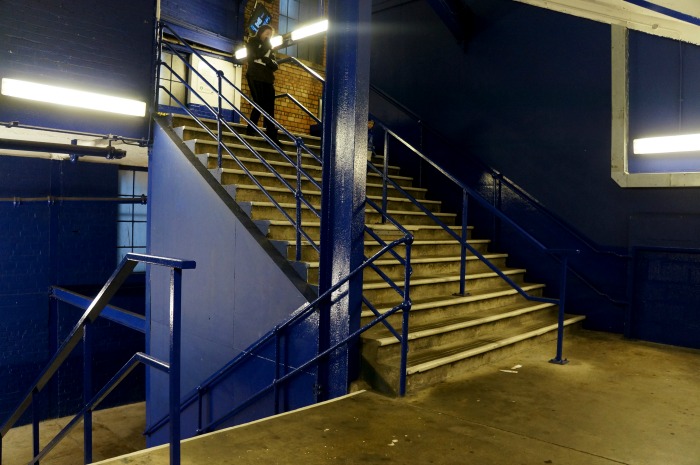 And we can keep going….yet more steel and brick and gloss paint from the dark ages (probably with plenty of lead in it). We are getting closer I promise. Soak it up though. You know the drill by now you lot, ’tis football history in those there bricks.

13) The stairs from your childhood 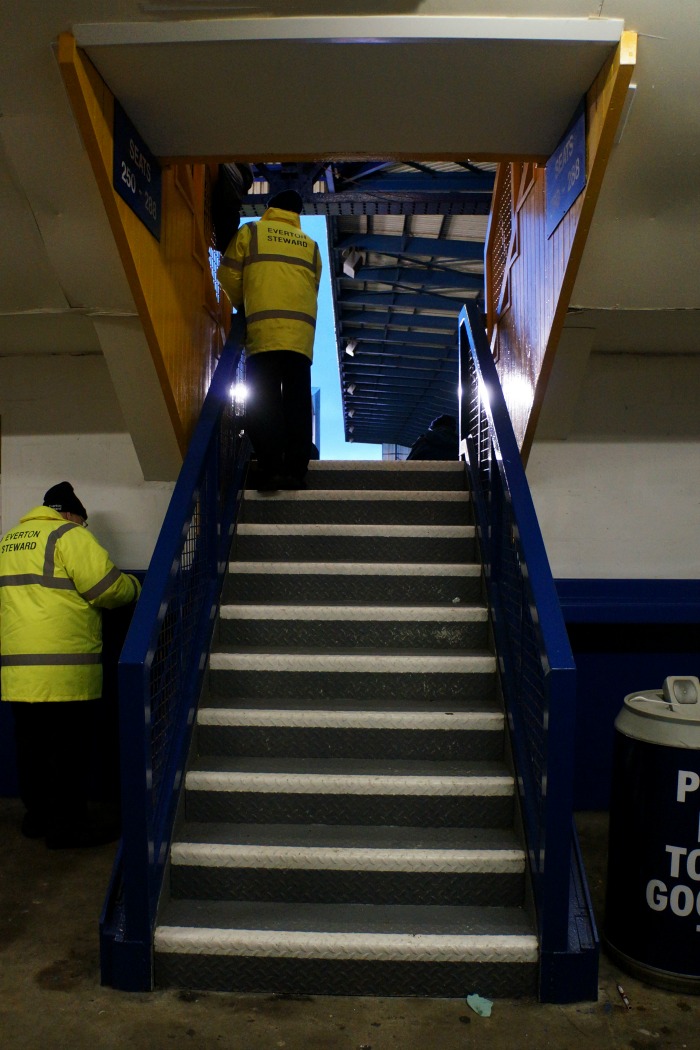 A trip to Goodison reminds me of the first time I went to a football match as a kid. Did you run up a staircase just like this one? Can you remember being stood at the top and seeing the ground open up in front you? The first time you saw the pitch and got hit by that unique set of noises, sights and smells that somehow have stuck with you ever since?

Get yourself to Goodison peeps, it’s the closest to a DeLorean you’ll ever find. 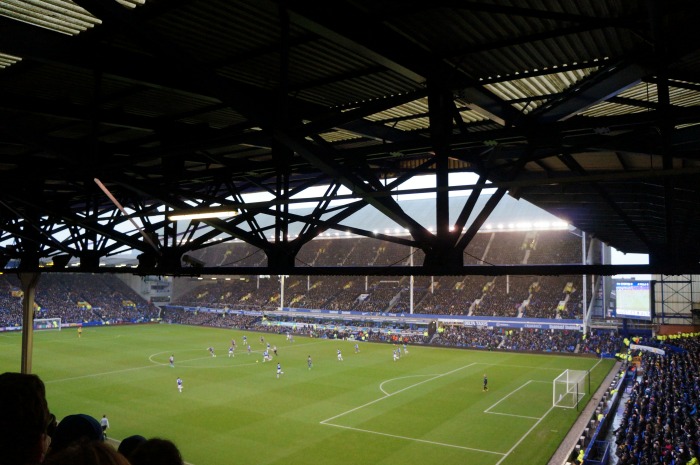 And there it is. Not symmetrical whichever way you look at it. No two stands quite the same. Loads of steel work over the top of your head framing your view. Squeezed into a plastic seat that was bolted on to the terracing post-Taylor report and doesn’t quite fit. A dull rustle as the rain hits the corrugated plastic and asbestos roof.

All a bit grubby round the edges and no chance of getting down the narrowest of aisles to the toilet. All in all then, absolutely bloody wonderful. 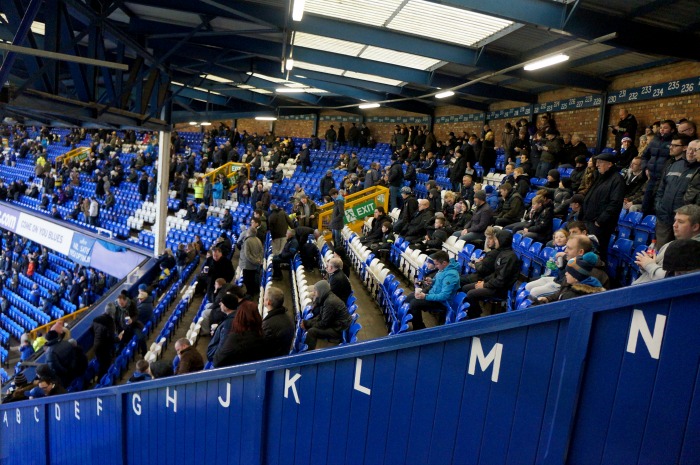 Yep. That’s right. Wood under foot and between the stands. Makes a cracking din if you stamp loud enough. 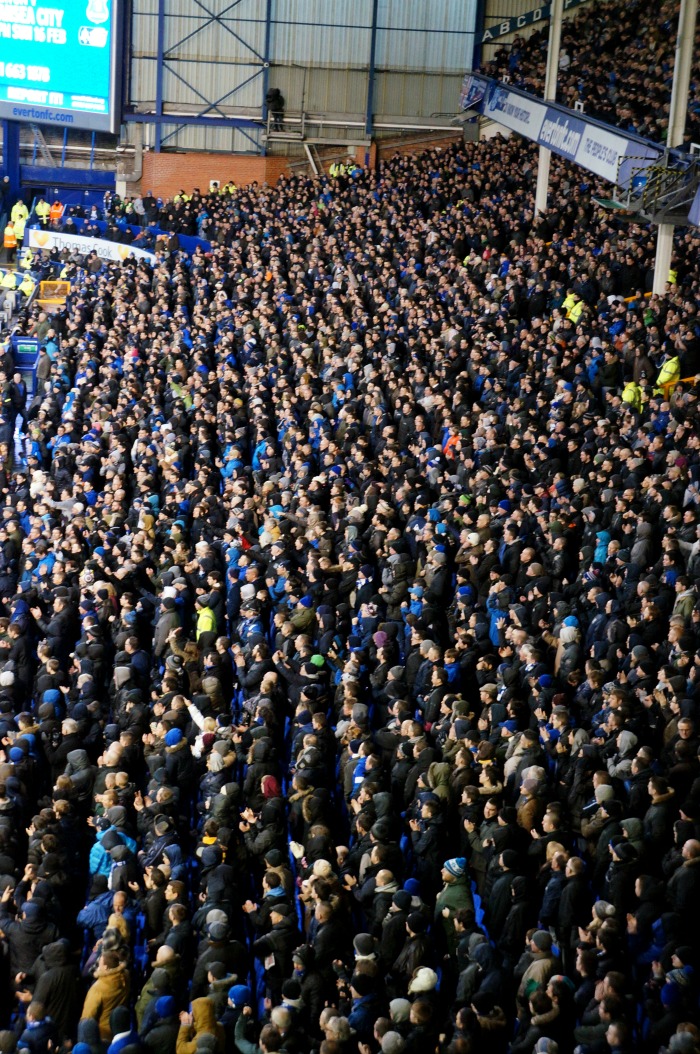 This lot don’t need their plastic seats, standing is just fine down there. When they get going, it’s a real throwback to another time. This is a proper ‘end’. I have stood in the Gwladys Lower and its one of the most authentic football experiences I’ve ever had. 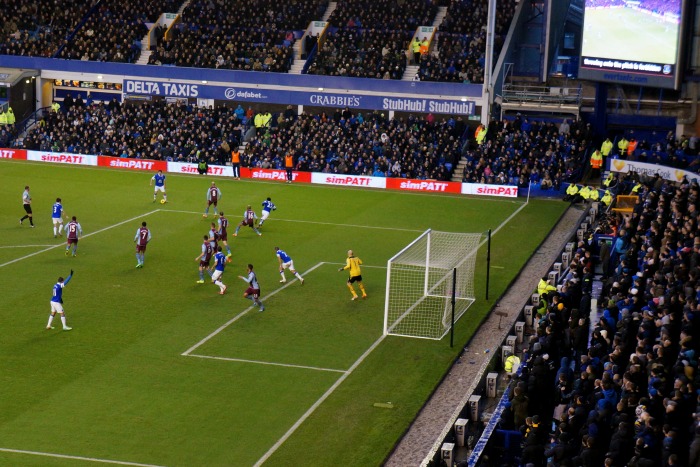 You can reach out and touch the players at Goodison (or at least it feels like that). You are so close and the stands raked so high that you feel completely immersed in the game. It gives the place a special bond between players and fans that no modern stadium, all sightlines and shallow banking, will ever replicate.

Just out of shot, I’ve got my hand up too. I reckon I could have headed it in from where I was sat. I’d had the better run… 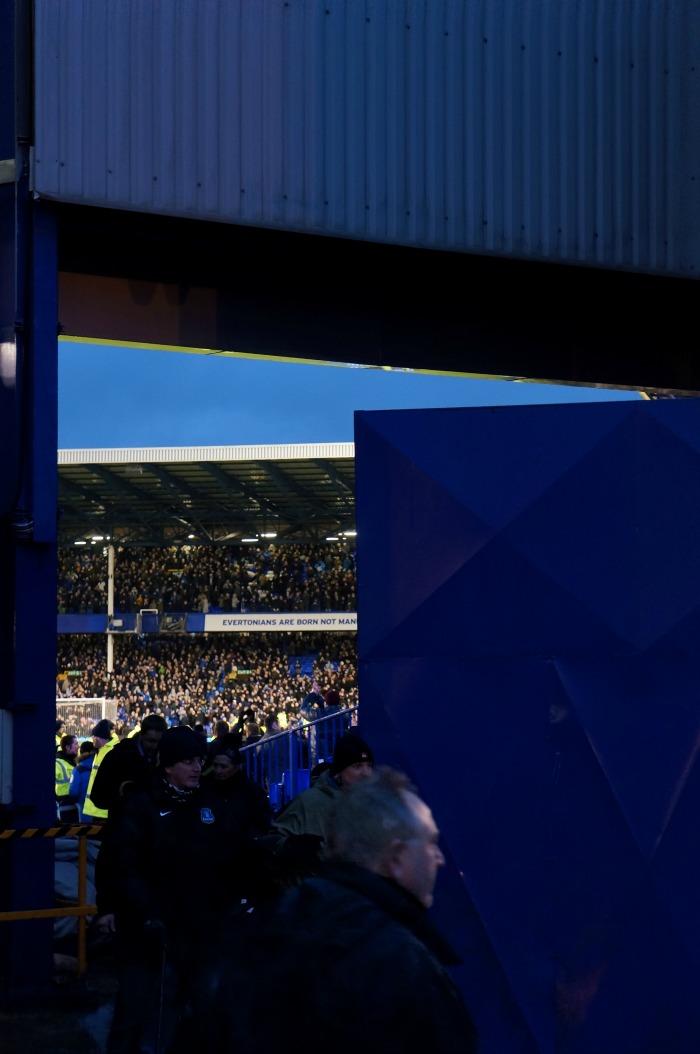 When the whistle goes in the floodlit inner sanctum, it’s time to cross the threshold back into those terraced streets. Here’s the classic football ground shot that we see less and less.

Football ground to street, separated by nothing but a steel gate. 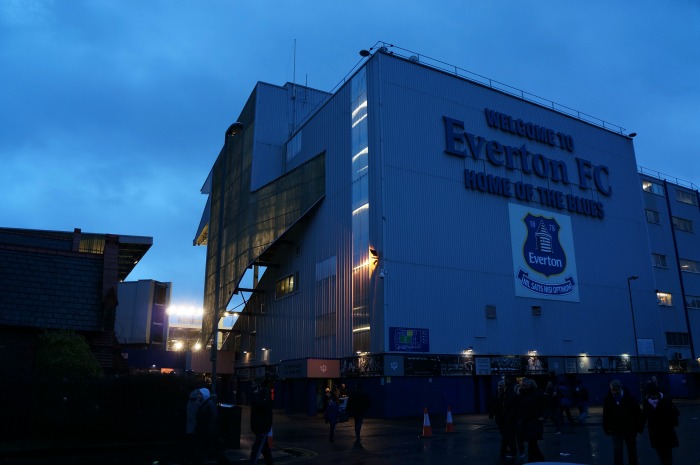 The last time I took my camera to Goodison I deliberately left five minutes from the end. I wanted to be stood on those streets as the floodlights leaked out of the corners of the ground and lit up the darkness. I wanted to be facing the people as they poured out and off for buses into town or pints in the pubs.

This photo could have been taken any year from about 1960 onwards and, with the exception of a few details, would have looked exactly the same. This is the place where football history has been made over and over and there is something wonderful about the fact that this spot never changes.

How many kids have looked over that wall just by the side of St Luke’s over the years wondering what is going on just behind it? The thing with football is that the fundamentals of it never change, so no matter what your era, or your age or where you are from in the world, you get it. I love that Goodison hasn’t changed much either. For all the same reasons, I get Goodison. 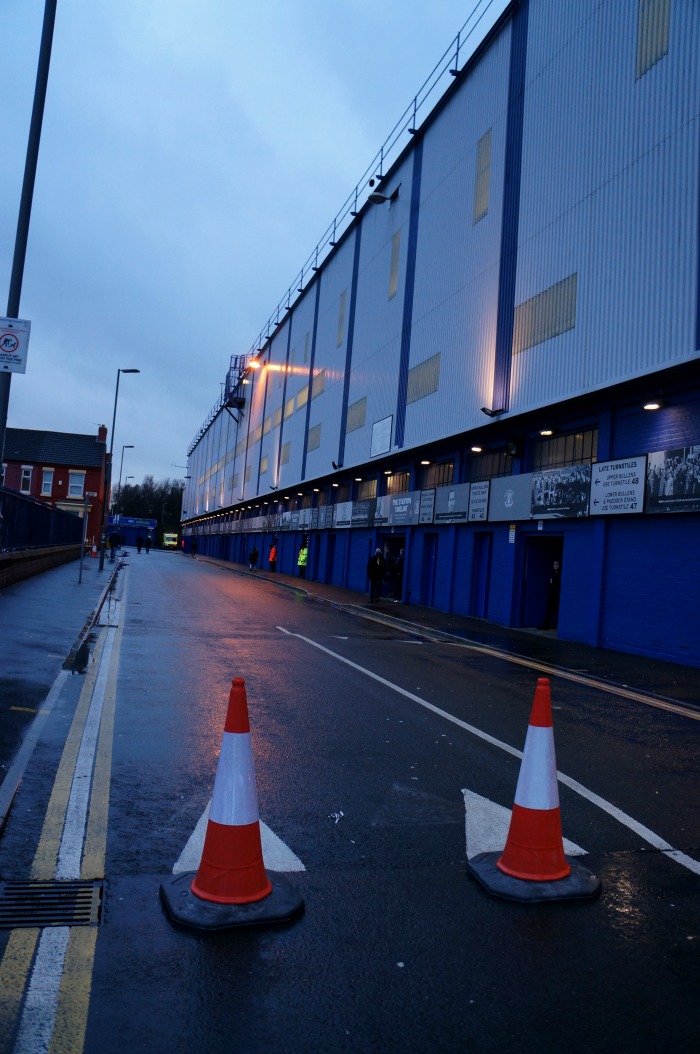 And then the streets go quiet. The people of Everton go back to relative normality until the next instalment. On my way out I spotted these two fellas. They were the only two reds I’d seen all day.

21) The People’s Club in action 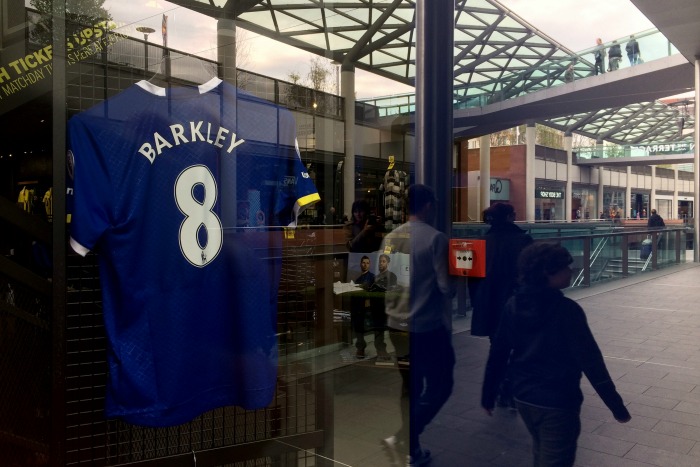 And now the final photo. Reserved for something that I view as very special. I have written a great deal about Goodison Park and about the wonderfully rich history of Everton FC in this article. Now it’s time for me to pay compliment to this football club in the present.

The subject was a young man by the name of Ross Barkley. He was (and remains) a contract rebel. For Everton, that was irrelevant. Barkley was an Evertonian and a Liverpudlian. In the week when that wholly inappropriate piece of writing was published, the window of the club’s city centre outlet included one shirt and one shirt only. I don’t need to tell you the name on the back of it. The People’s Club supporting one of its own, with quiet dignity, no fanfare and a touch of class.