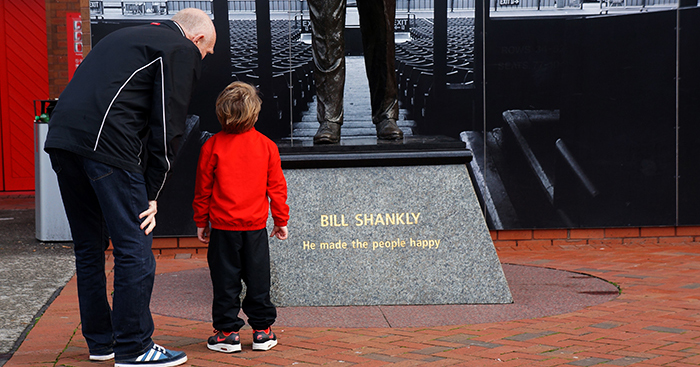 Attempting to sum up the heart and soul of Liverpool Football Club in 21 photographs is not an easy task.

I’ve beat myself up about this piece for weeks. How can I find the soul of a thing so vast? More importantly, how can I strike a chord with fans from as far apart as Toxteth and Tokyo?

Well, there is one defining characteristic of every big football club. No matter how big their ‘brand’ becomes, they will always have a home. The sense of these homes is what makes visiting different football club special.

Fortunately for me, Liverpool’s home is very special indeed.

When you visit Anfield, make sure you walk around the streets. Drink in the pubs, eat in the cafés, and nip into the bookies. Soak up the ‘Liverpool’ in Liverpool Football Club. Listen to the accents and smile. There are no Starbucks round here, laa. 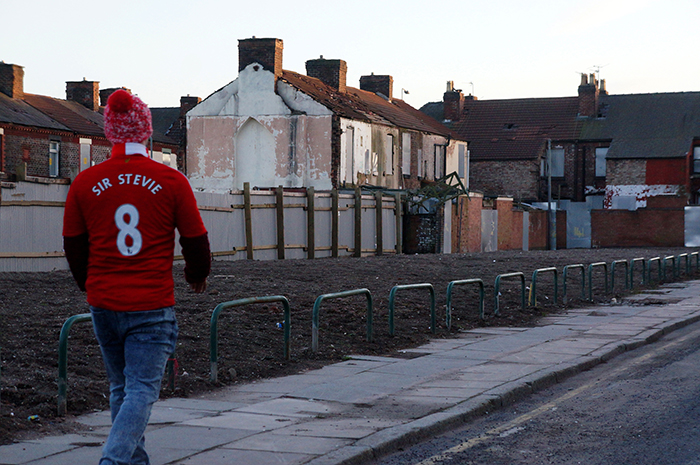 This chap: the bobble hat, the swagger, the shirt. Wonderful. These are the matchday sights and sounds. Once a fortnight a tired old maze of terraced streets gets turned into a bright red fashion parade. The names on those shirts will come and go, but the club will always be rooted in Anfield. 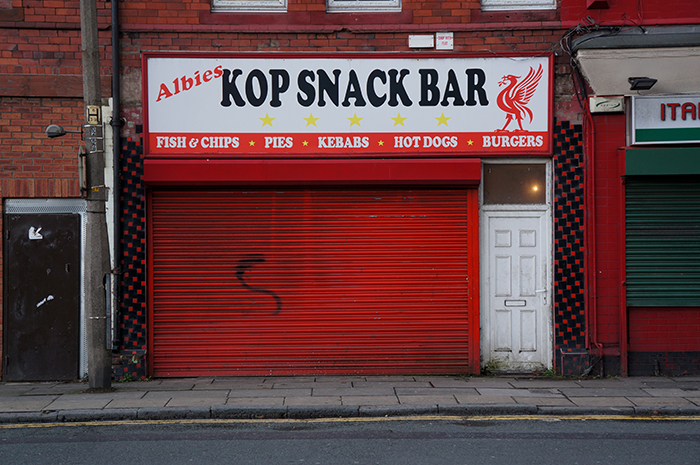 Around the ground is a village of shops, cafes and pubs. Albies is particularly salubrious. You can see it now, can’t you? “I’ll have a skinny spiced pumpkin macchiato and a sesame seed bagel please. Do you do contactless?” 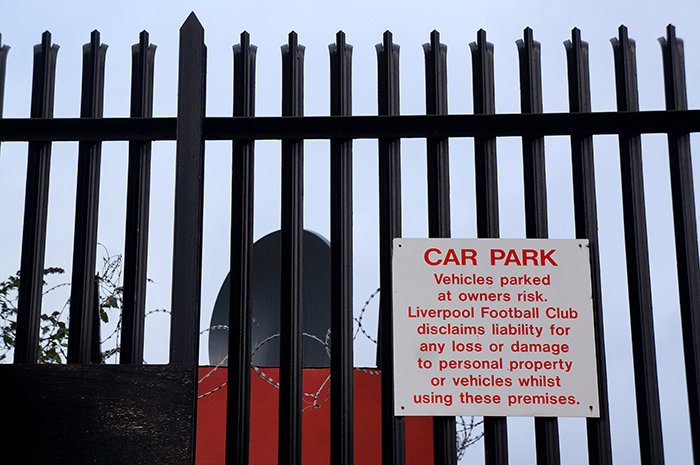 Nothing like a bit of regional stereotyping is there? If you know, you know. Hopefully you can laugh about it. 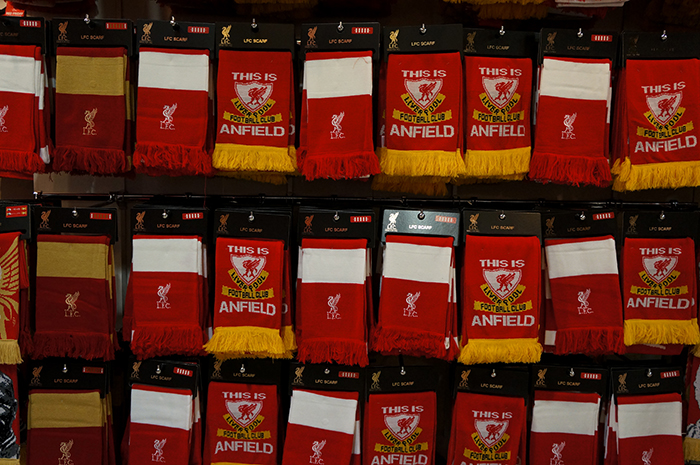 Through the Paisley Gates, past the statue of Shankly, finally, you enter the inner sanctum. The Club Shop (Hyper Store or whatever) is right in front of you. ‘You’ll Never Walk Alone’ will be played. You need to be a part of it. THIS IS ANFIELD after all.

These are official and they are shiny….I dare you to resist. 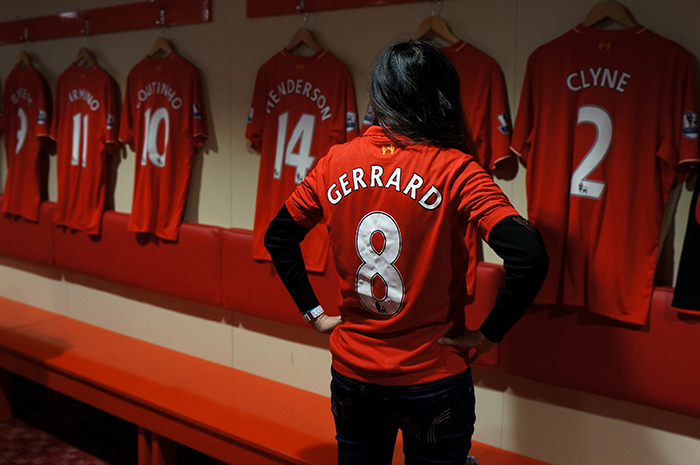 One way ticket, yeah. Sorry, I needed to get a Beatles number in here somewhere.

When you’ve won 18 league titles and five European cups they will come from far and wide to make a pilgrimage. Who knew Nathaniel Clyne was so big in Japan?

(6) Let me tell you about a man called Bill 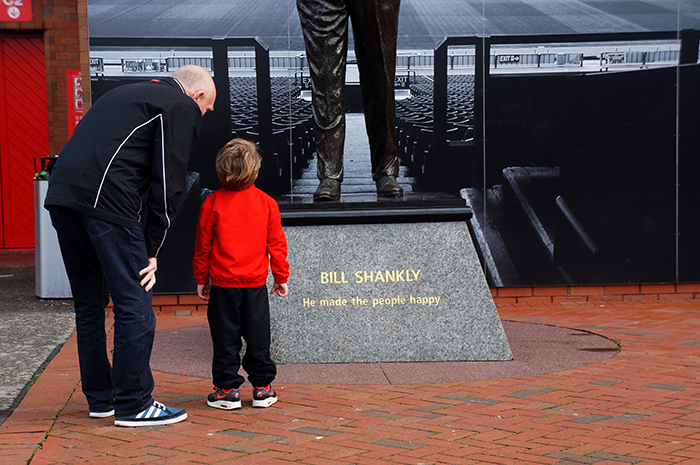 I love this photo. Bill Shankly got it. He just bloody got these fine people and their football club.

There is a letter in the museum in which Mr Shankly says, “I am enjoying working for the Liverpool public. You can’t kid them. I don’t try to kid them.” Bill knew and they loved him for it.

I am too young to remember Shankly, indeed most are. But football clubs are built on history, and Liverpool’s is richer than most. 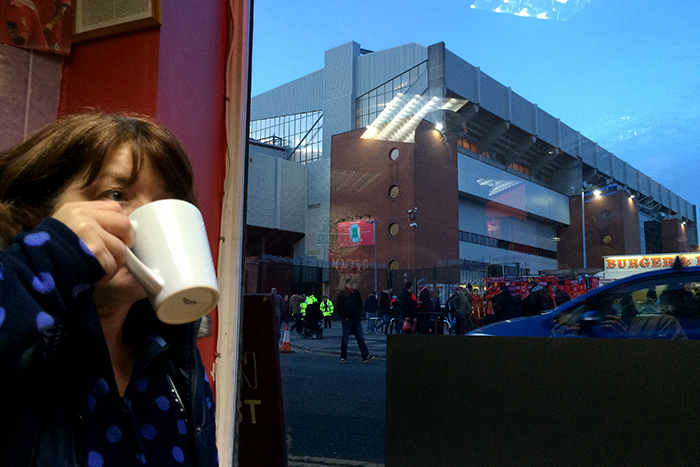 Having a brew, in a proper mug, with one of the best backdrops in world football, for a quid. I love this photo.

PS. That’s my mum. That’s how special Anfield is. When your team play there, you feel it sufficiently glamorous to take your mum. Hello mum. 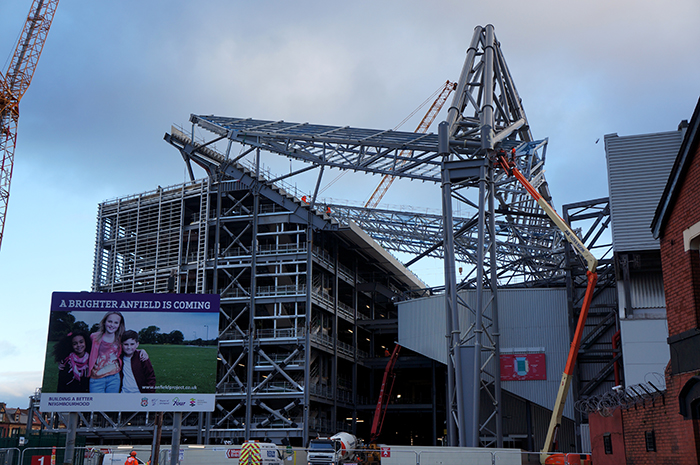 There was a time when the influence of football clubs on their neighbourhoods stopped at the car park wall. Nowadays, in the world of billion dollar revenues that would never do.

Liverpool had been trying for years to expand into the terraced streets that surrounded them. Phase one is finally completed. but there is plenty more work still to be done.

They say a brighter Anfield is coming. It will be shinier and bigger, that’s for sure. As with every football ground in this country, my advice would be to visit it before it is too late.

(9) European Cups are ten a penny round Anfield Way 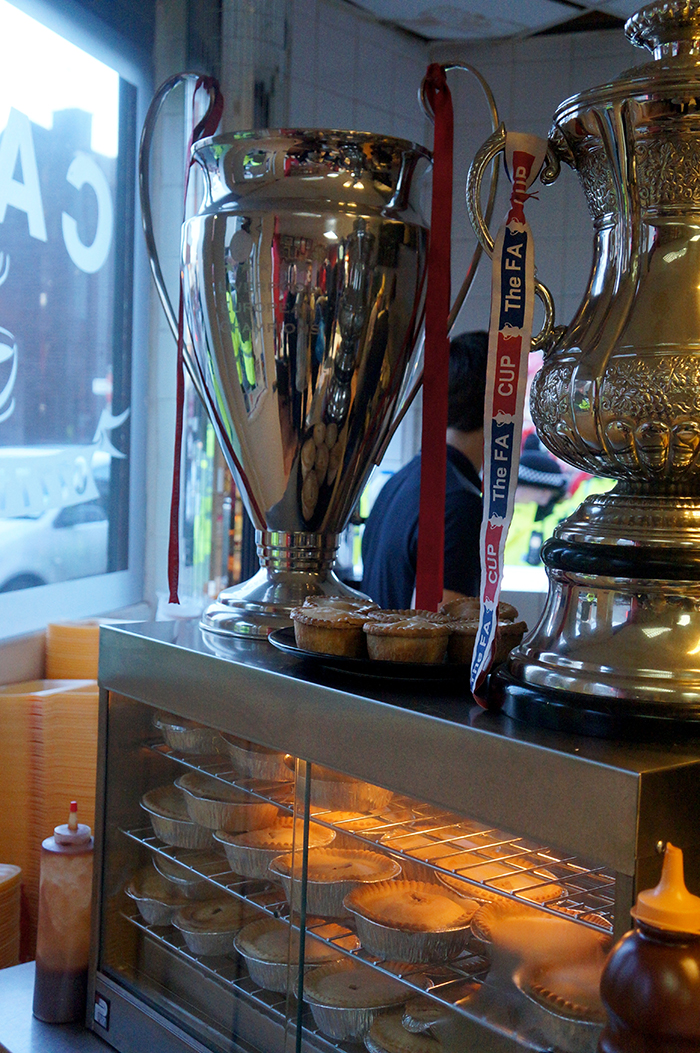 Not many pie shops have a European Cup on the counter. Proper working class fodder. VIP Trophy Cabinet. Welcome to Anfield indeed. 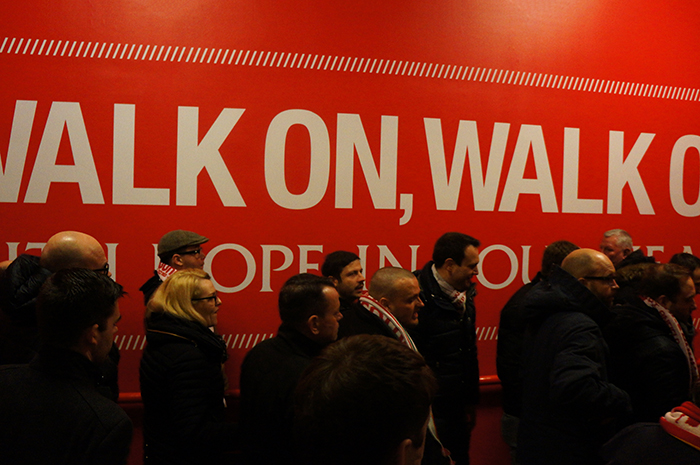 Walk on. Walk on. With Hope in your Heart…..to your seats on the upper concourse of the Centenary Stand.  It will be worth it. 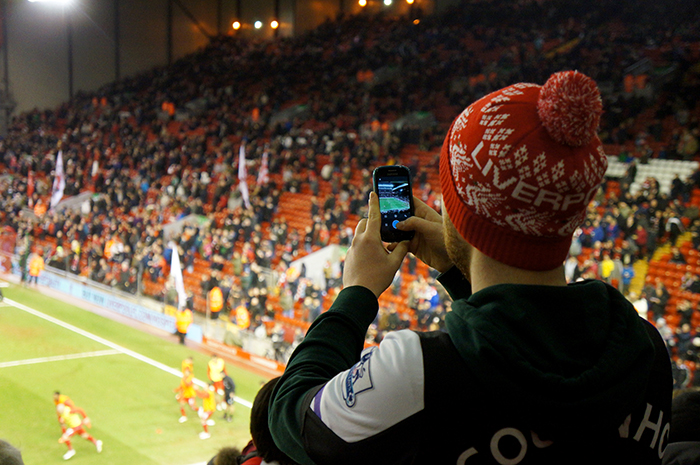 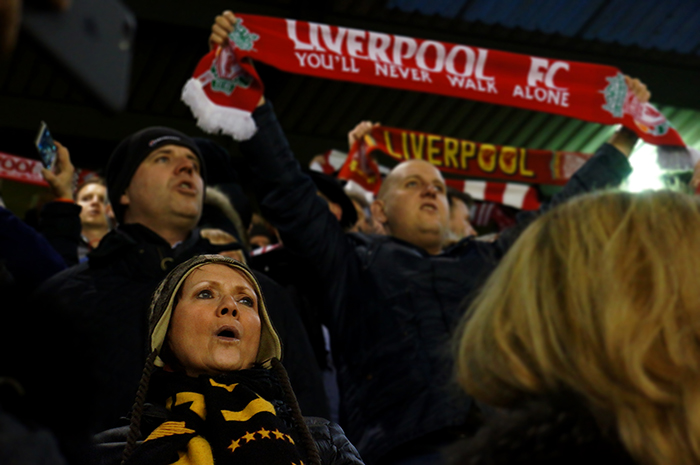 This is what it looks like to be in the Kop as ‘You’ll Never Walk Alone’ is being played.

I took this by accident. I lifted the camera over my head and took it upside down of the scarves being held behind me. The lady over my shoulder was in perfect focus. She’s only got eyes for the pitch. 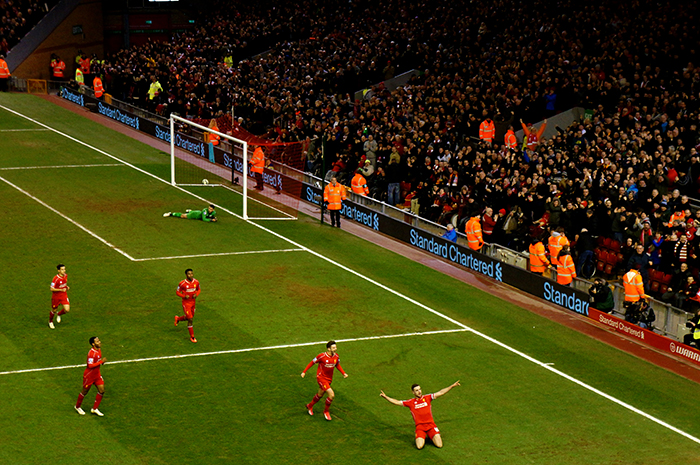 A huge thank you to the lady in the orange coat stood in the doorway. You can be my monthly “get in touch and I’ll give you a print” winner. You made this picture.

In his first match as captain Jordan Henderson launched a volley into the bottom left hand corner and then did a slidey-knee celebration in front of the Kop. Every little boy’s dream I would think…unless you are from Manchester.

(14) A club built on dreams under the lights 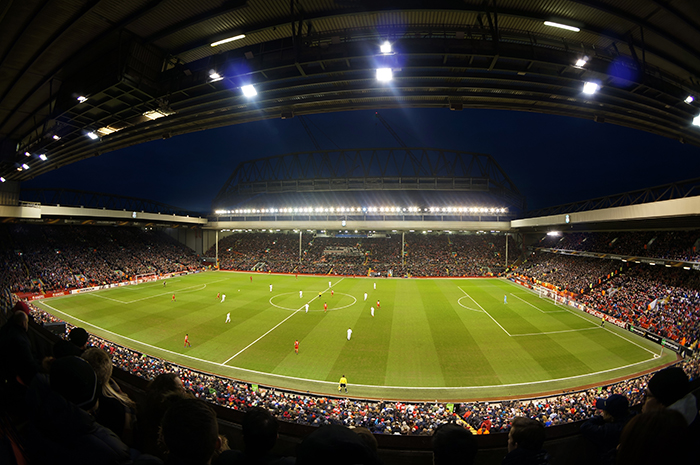 Anfield is not the biggest stadium. Nor the oldest, the scariest or even the prettiest. When you switch the floodlights on, though, this place comes to life. It is a special place to watch football, especially on those European nights in which the club made its name.

This club was built on magic. Liverpool as a city (and particularly Anfield as a suburb) should not be able to sustain a world-class football club. The history and the will of the people mean they do so with a swagger. 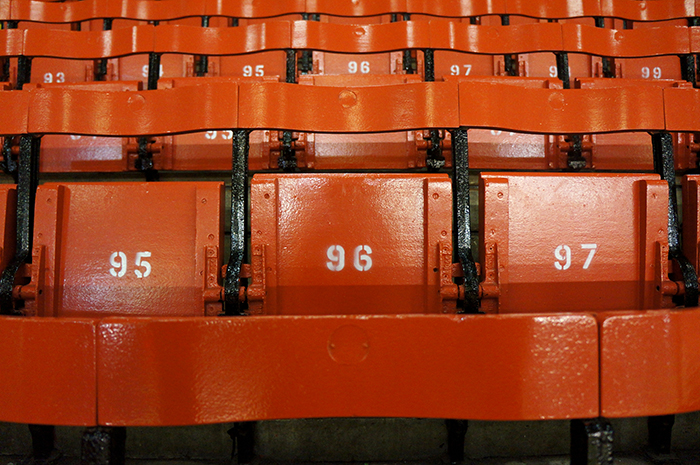 I have shared this photo with Planet Football before, but I couldn’t write a piece on Liverpool without sharing it again. Hillsborough is just too big a part of the story of this football club.

I got into Anfield early on my last visit and walked to seat 96 to have a quiet moment before the old Anfield was gone forever. This picture was my way of paying my respects. Football will never look like this ever again and the 96 people who went to watch their team play and never came home will simply never be forgotten. 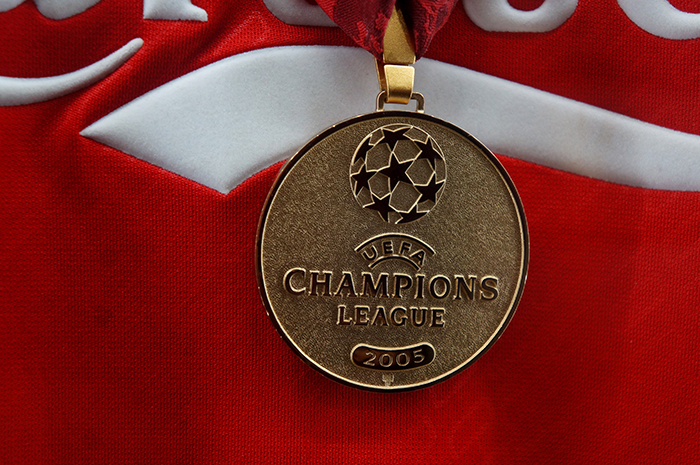 Ah, the magic of Istanbul. You can’t share the story of Liverpool without mentioning that game. The night they turned four into five will always be remembered. It was a ridiculous game of football in which this grand old oil tanker of a football club rolled back the years.

This is Steven Gerrard’s shirt and medal. A new generation of fans was born. 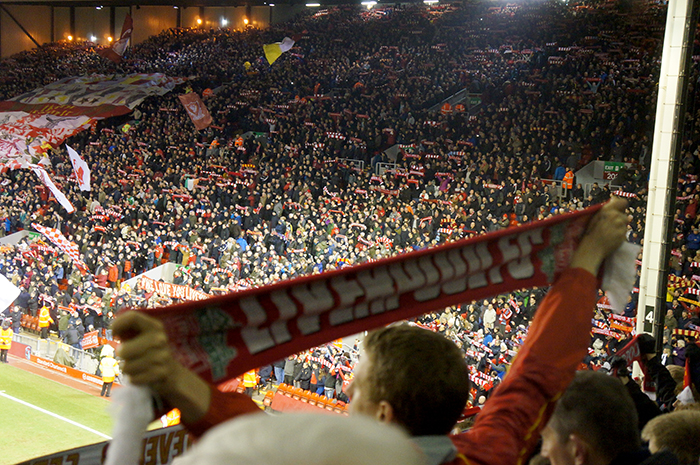 It would be too easy to focus on the bloke with the scarf. Instead, look at the Kop as it goes all the way up. They say that lot could suck the ball into the net. I believe them. This place is magic after all.

(18) The Cathedral groweth ever larger 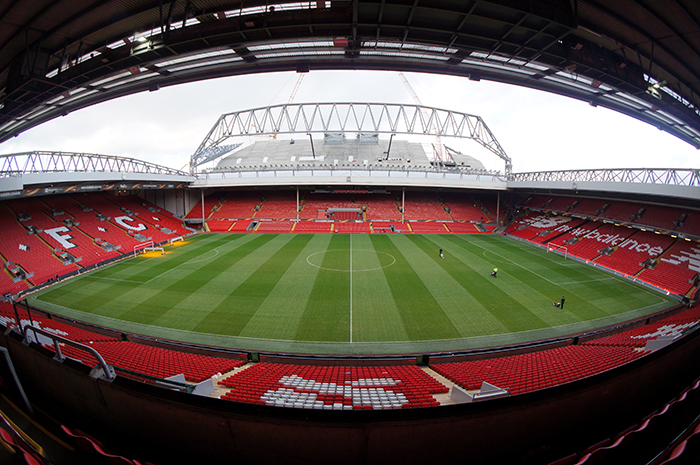 I’m a lucky boy. I find myself saying that every month. I have on occasion been able to sit in football grounds when not many people are about.

You can dream of what they look like full. You can think of the names that have graced that green rectangle in front of you. You can hear the streets outside, but the stands keep the wind off you.

I could see the workmen across from me building yet more space for paying guests. I could hear the whirr the mowers below me. Liverpool Football Club never stands still. 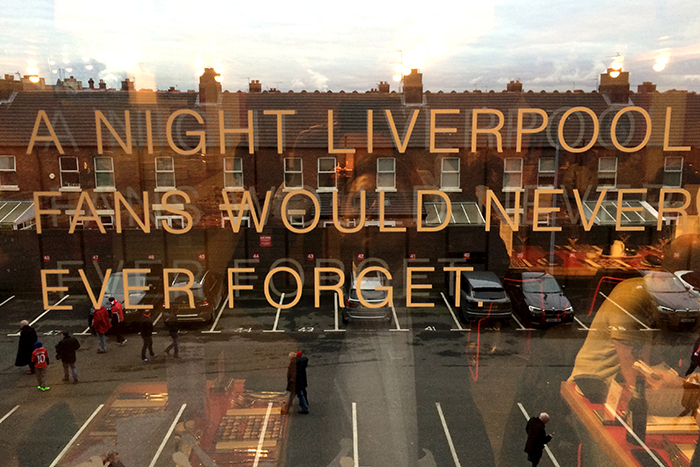 This is what Anfield looks like. These are the streets with the chimney pots that have tolerated the masses, the floodlights, the car parks. That phrase on the window is meant to describe Istanbul in 2005.

For me it could refer to whatever your imagination allows: that first trip to Anfield, that Gerrard goal against OIympiakos, the UEFA Cup Final against Alaves, beating Real Madrid 4-0 at home. This football club isn’t global for nothing, but it will always have the backdrop of those streets.

(20) In our Liverpool Homes 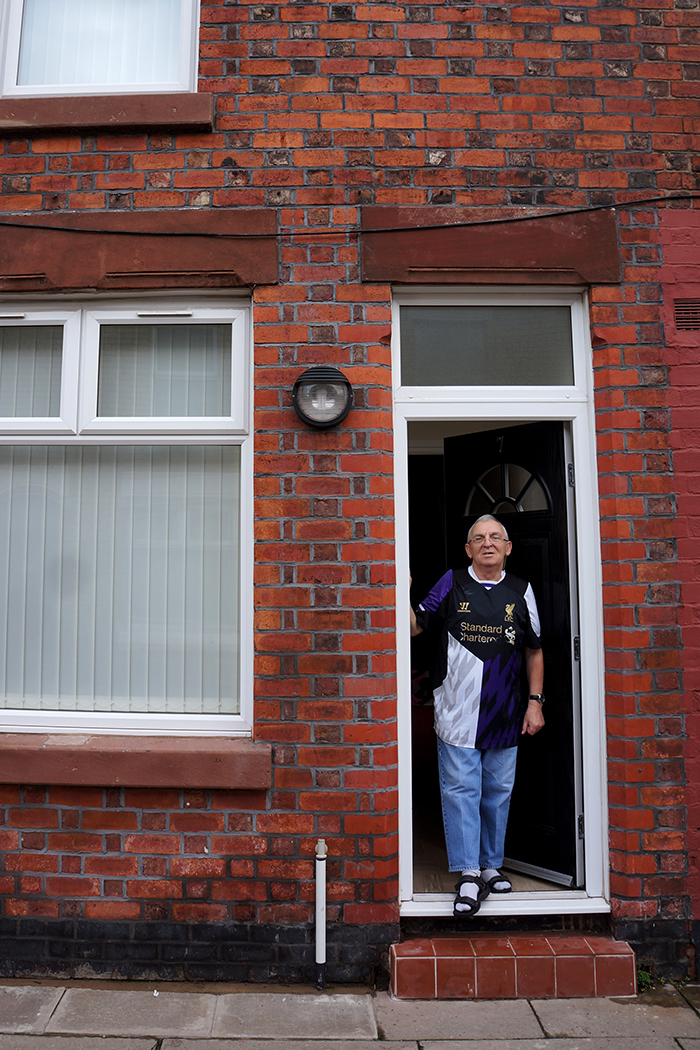 I rarely take posed photographs. “‘e r laa, take my picture” I heard over my shoulder as I poking my head (avec camera) through some railings at the back of the old main stand. He was proud as punch of his Liverpool home, and his pretty snazzy shirt. 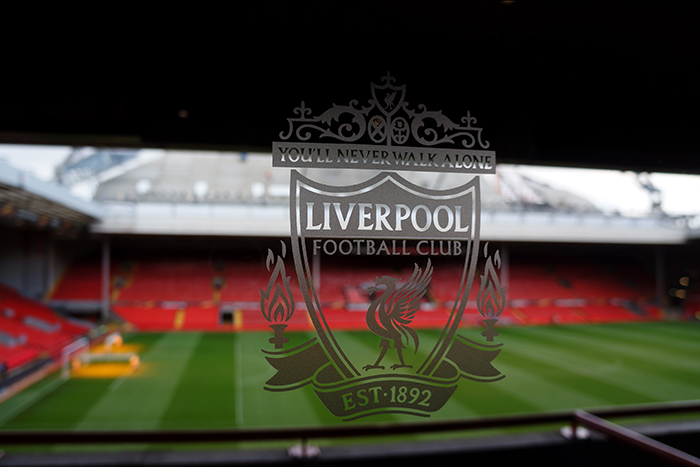 A nice way to finish. Little details at every turn that remind you of just how grand your hosts are. No expense spared here. A special home for a special football club.