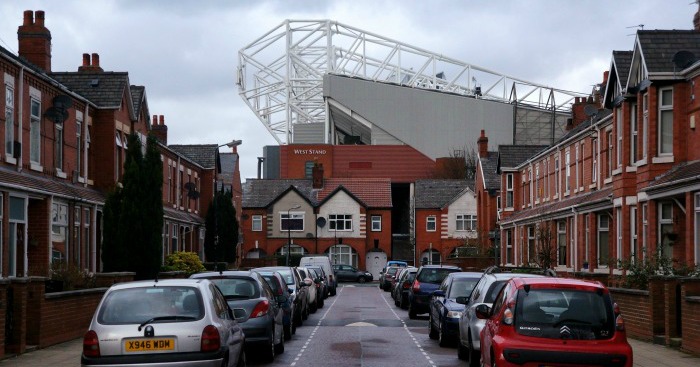 Manchester United is the best known football club on the planet. And Old Trafford is probably the most photographed stadium on the planet. But here’s an attempt to sum up the club and the place in 21 photos.

There are common themes developing in this series of ours: home, belonging, history and love. Surely, United – the United – have all of those in spades? Of course they do.

Twenty-one photos to show the soul of the biggest football club in the world? Here goes…. 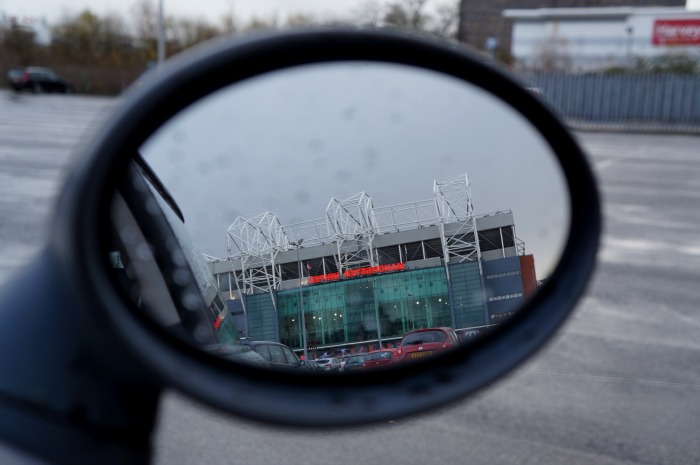 Everything you need to set the scene.

It rains a lot in Manchester, and the area around Old Trafford is working class and industrial. Come here most days and the sky will be grey, the red brick terraces ordinary and the factories getting on with business.

You’ll see one thing shine on through the gloom. The neon sign upon Old Trafford will be in your face. Some may say it is ostentatious, but this is Manchester United after all.

No matter what you throw at this football club, its stands loud and proud. It may have taken over the world, but the HQ is among the people of Stretford. 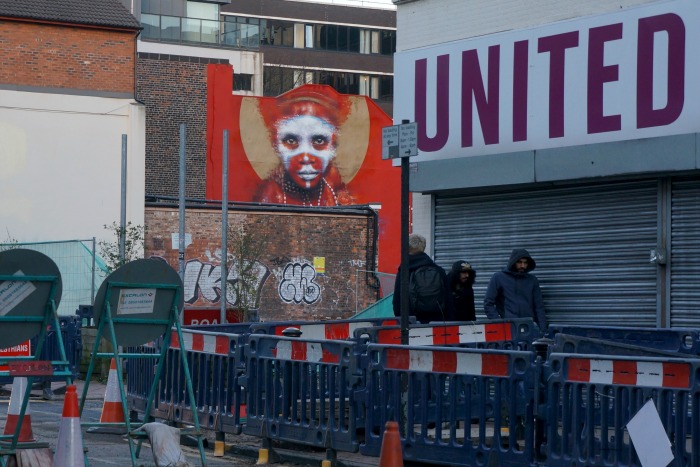 Stretford people may be local, but they come from far and wide to pay homage at this footballing Mecca.

In fact, if you walk the streets of Manchester on a match day morning you’ll see United – whether you are looking for it or not… 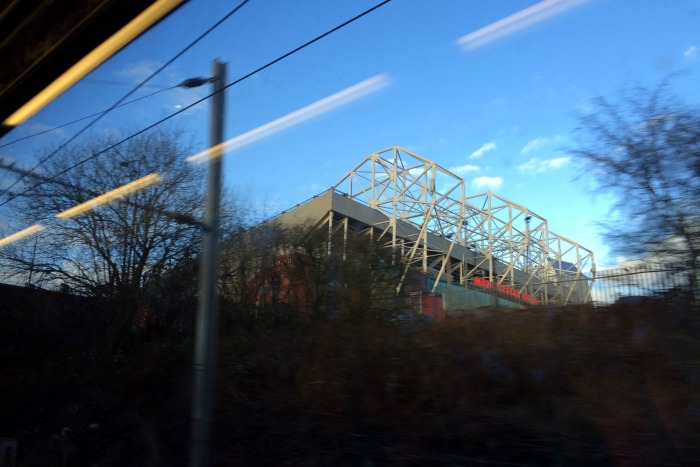 So the day begins. Time to head out of the city and down to Old Trafford. You can catch the tram (how very northern), the train (how very sensible) or even be lavish and jump a cab (how very southern).

Whichever way, if you’ve grown up in the 80s, 90s or even the 00s, you’ll never forget the first time you see this place with your own eyes.

(4) Down the Chester Road 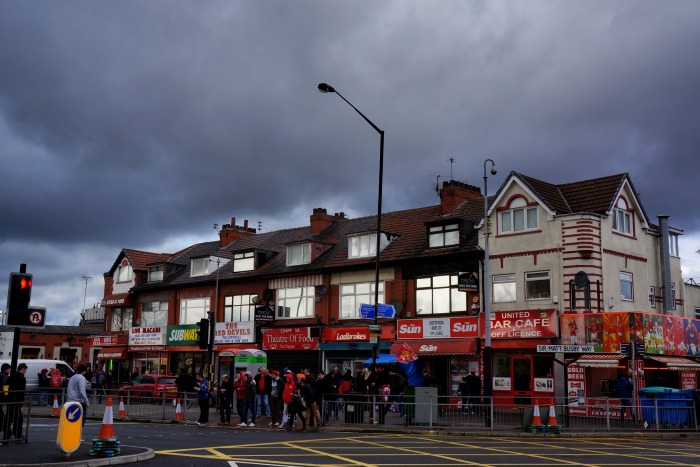 As you walk to the ground you soon you realise this lot are just like you and me.

The chips from Lou Macari’s taste wonderfully the same. The Red Star souvenir shop has enough unofficial tat to keep the kids happy for hours. They even have a subway, though when you can dine at the Theatre of Food, god knows why you would choose a BMT on Italian herbs and cheese… 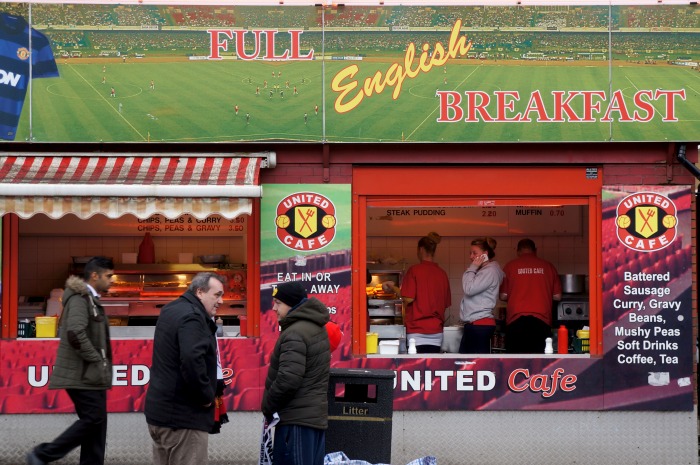 United have a place called Red Café which is dead official and club run. I much prefer this place.

You may baulk at paying £2.20 for a steak pudding, but let me ask you this, have you ever seen Michel Roux Jr. successfully fry chips with one hand while holding a phone in the other? Nope. Exactly. Dane Bowers, this place. Another level. 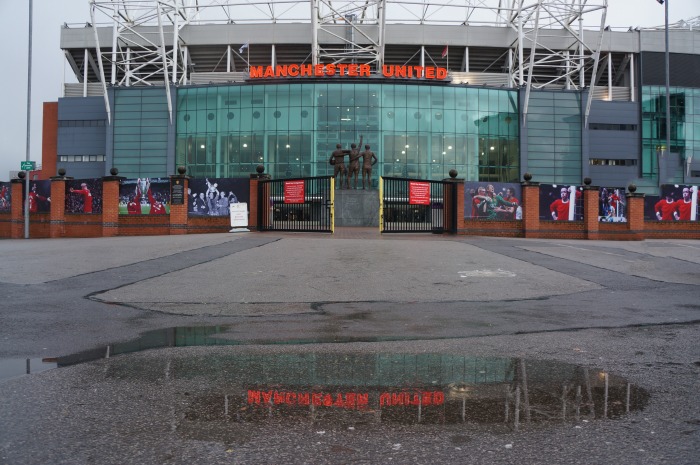 As you walk down Sir Matt Busby way with your chippy breakfast/dinner/tea* in hand (*Kick off subject to Sky TV listings) you’ll come to the stadium, and I don’t care where you are from or what you have seen, it’s a sight to behold.

Green tinted glass between the megastore quadruple doors below and neon sign above. Sir Matt Busby, great architect of the babes and of European glory in ’68 keeps watch over proceedings. Across from Sir Matt stand Denis Law, Bobby Charlton and Georgie Best.

Georgie stands ever so slightly off to one side. He always was his own man. Bobby ponders life as Mr Man United, shirt perfectly tucked in, while Denis, wonderfully, points his index finger to the sky, cuffs pulled over and shirt hanging out. They do call this the Theatre of Dreams I guess.

(7) The Flowers of English Football 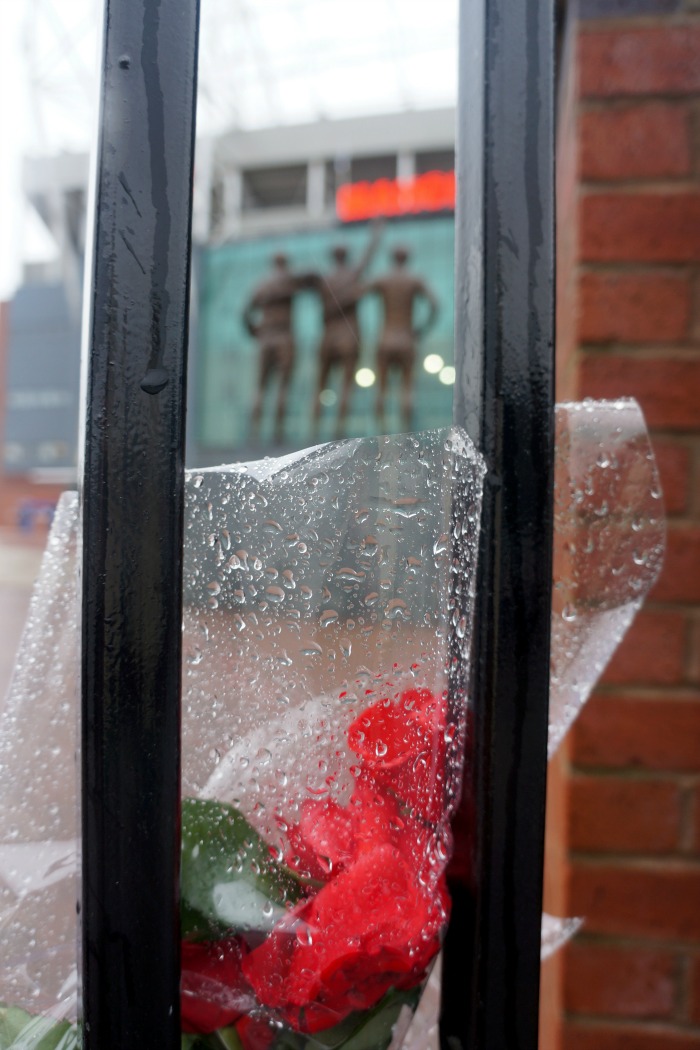 That golden era of United is synonymous with one of the biggest tragedies in football history. The Busby Babes were, without a doubt, a great football side. After playing in a European Cup tie at Belgrade, disaster struck when their aircraft crashed on an icy runway after refuelling in Munich.

United could have been wiped out, but Sir Matt Busby recovered from his injuries and stayed in post. He rebuilt the football club. No matter how great the triumph this club may enjoy, no one here has forgotten the events of February 6, 1958. The Flowers of English football. The Flowers of Manchester. 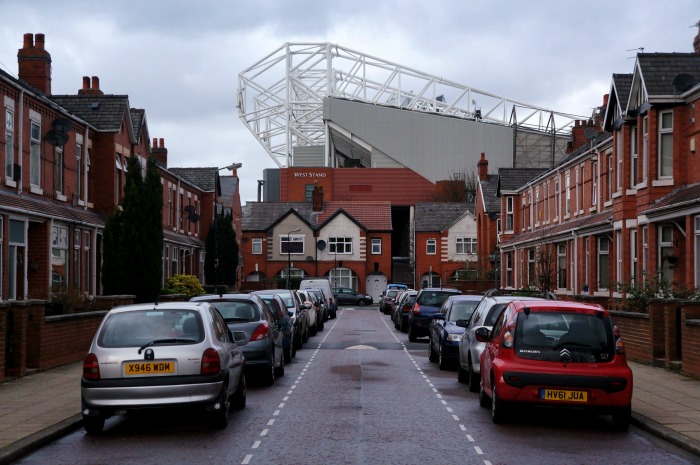 If you keep walking before kick-off (I say it every month) you’ll rub just a little of that glossy exterior away. Old Trafford is a traditional ground, vast in scale as 25 years of TV money has been wisely spent.

Look closer though, red brick like the houses around her. No corporate signage here. OK, they’ve gone a bit average with ‘West Stand’ but hey, this is still the Stretford End, in Stretford. Gosh, this lot are just another football club. They are lovely! Aren’t they? 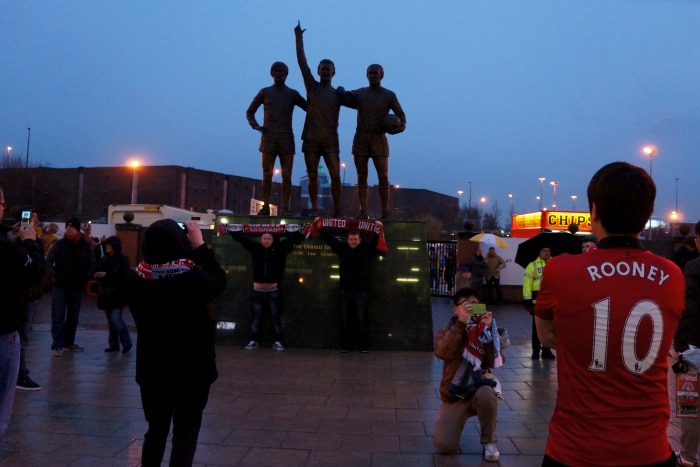 Hang on. You don’t take over the world for nothing. I told you they come from far and wide. Don’t hate. Soak it up. You’ve obviously got one of the hottest tickets in town, and you know where the best chippies are. 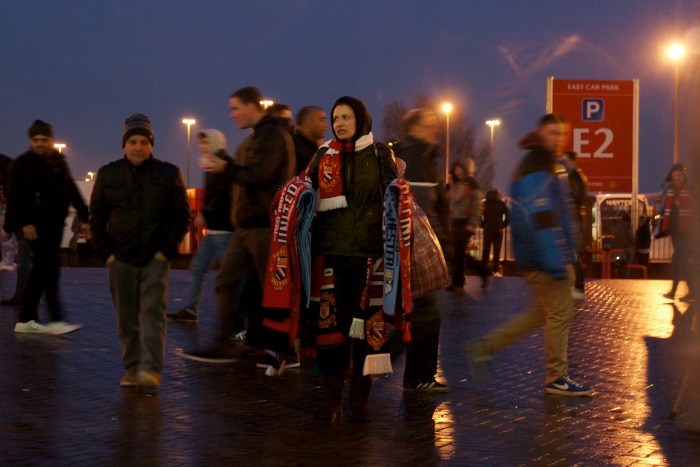 As night descends, the streets around Old Trafford take on an atmosphere all of their own. Yeah the street sellers are out in force at Anfield or the Bridge, but here they tread along an invisible line between United’s ‘official’ landholding and the unofficial streets that surround them.

The Busby Statue acts as a natural meeting point. The street sellers play cat and mouse with the club security just under it. Sneak under, shift a couple of ‘half and halfs’ scurry back. Mission accomplished.

PS – Try taking their pictures…a cat and mouse game of its own. 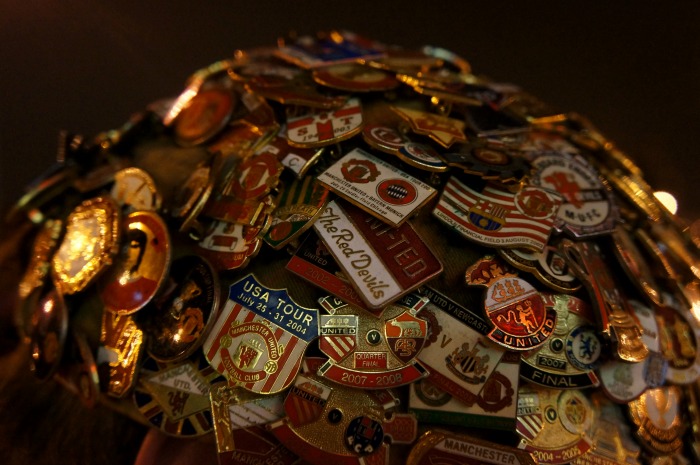 Like it or lump it. This lot are box office. Even the light around Old Trafford is pure cinema. This guy was a photographer’s gift. 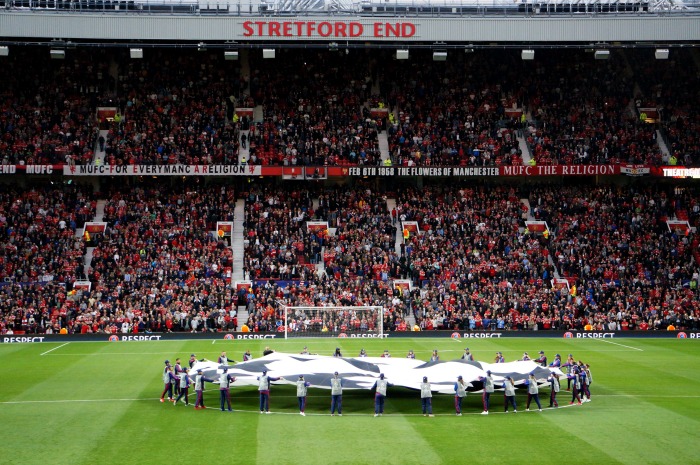 To quote another Manchester band in James, “If I hadn’t seen such riches, I could live with being poor”.

Sir Alex Ferguson is a tough act to follow. Finishing seventh and playing long ball was never going to do. This club EXPECT to see the Champions League come to town. It is now the minimum. 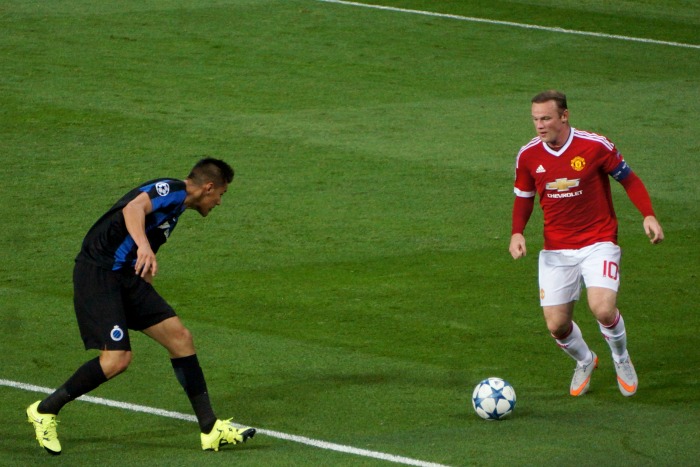 No matter when you visit, I can assure you that you will see quality. Brilliance. Even if it is just a moment… 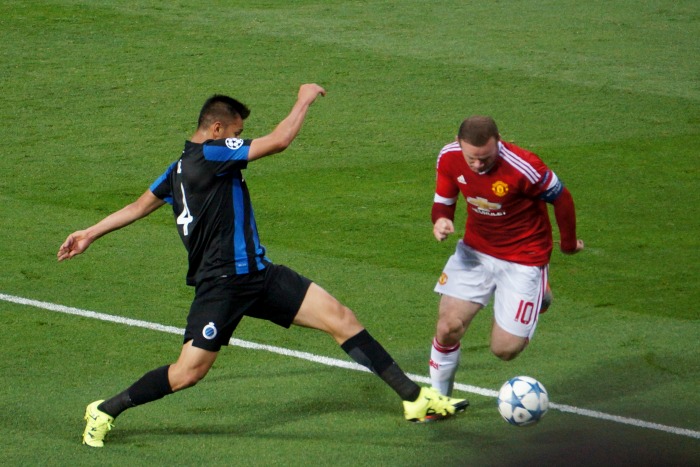 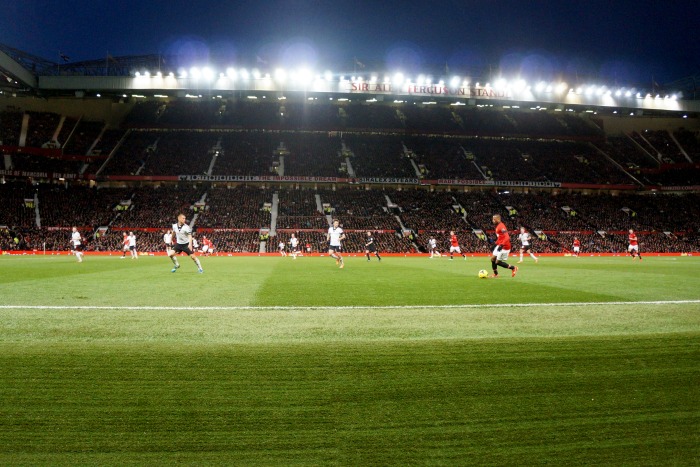 And to be honest, even if the football is dull, just gawp at the sheer size of the place. Just a touch shy of 77,000 can get in here.

The largest club ground in Britain and mostly built on three sides. If you sit at Row 1 of the old South Stand, you will see football from a unique perspective. 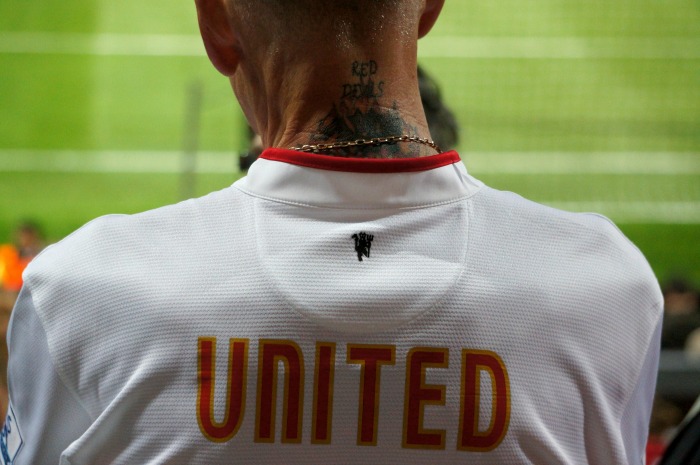 And if you think you’ll be surrounded by plastics, think again. 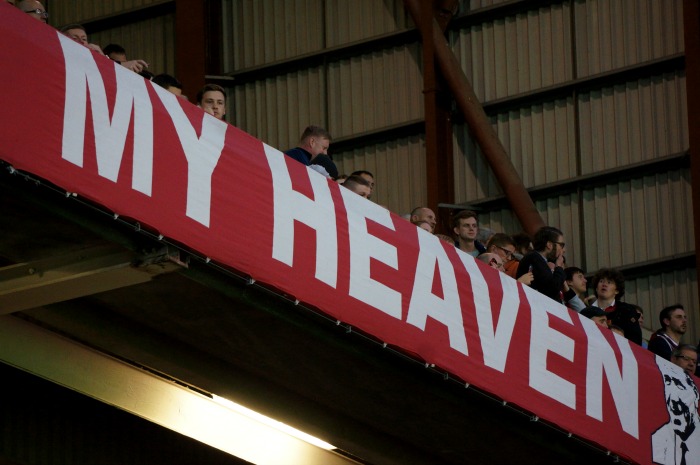 In fact, you’ll be pleased to know that most in here take it rather seriously. Sir Matt certainly did. 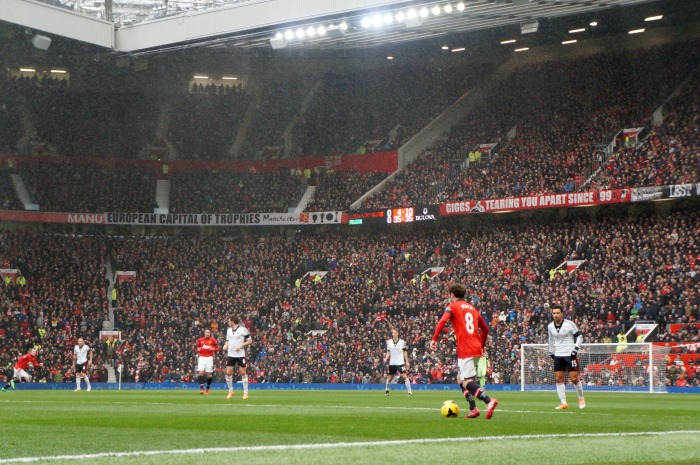 During your visit, it will rain. Fact. It won’t affect the quality, though. Can you see him? Yep, so can Juan Mata. Run timed to perfection.

(19) Exit via the gift shop (Mega Store round these parts) 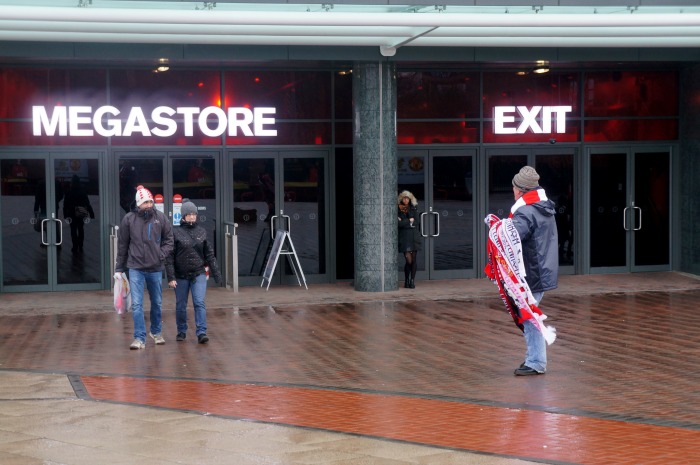 So concludes your visit to Old Trafford. Quality on the pitch must be paid for off it.

Commercialisation is what this club does best. Better than anyone else in fact. Exit via the gift shop, but remember, your friendly local seller will be waiting with a half and half, just past the line. 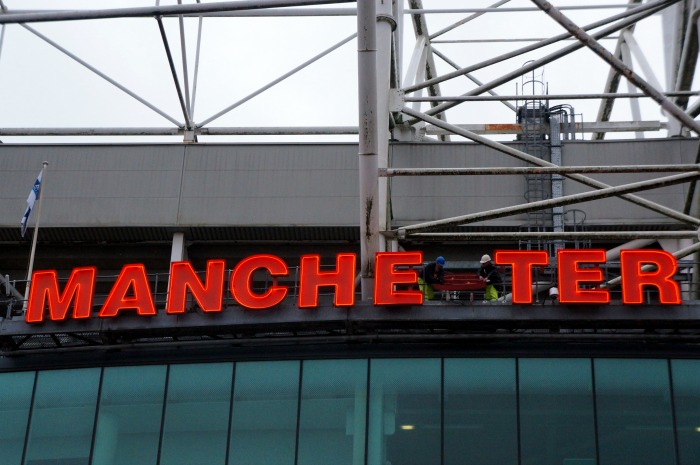 Transition is a dirty word in football. It is understood to mean a period of uncertainty and flux between two great eras. Most assume it will mean a dip in quality. It means changing the bulbs in your brightest lights.

United are seemingly ‘in transition’, but the good times would appear to be coming back. Mourinho has delivered the Champions League and Pogba is the new worldy in the midfield. That neon sign is proud once again. 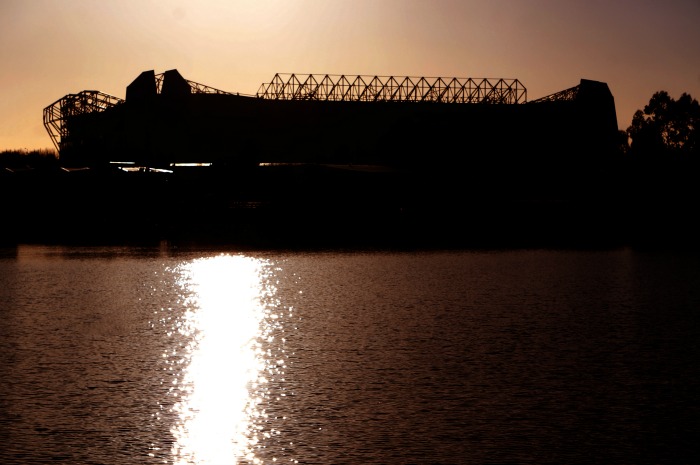 And so we say farewell to Stretford, but United will be with us every day. Via phone, web, TV and the local sports shop, wherever we may be in the world. Transition they may endure, but I can safely say, the sun will not be setting on this global empire any time soon.