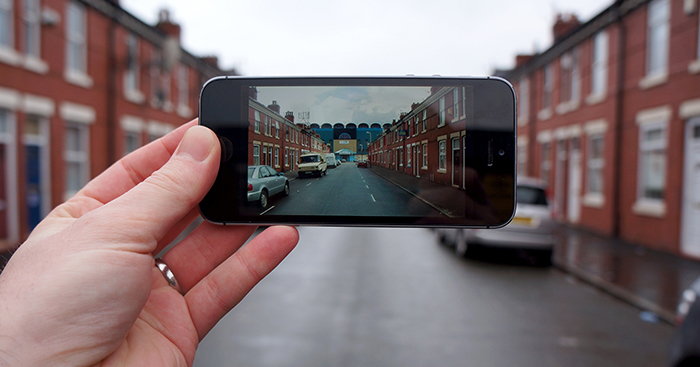 Manchester City might be one of the world’s elite clubs, but their story is rather more varied than many of their rivals around football’s big table.

From humble Gorton and then equally humble Moss Side came a club who competed with Europe’s elite in the late 60s and early 70s. A club that with Denis Law in sky blue had the audacity to relegate Manchester United at Old Trafford.

Then came cup finals but two relegations in the 80s before a drop all the way down to the third tier by ’98.

But by 2000 they were back at the top, by 2002 they had a shiny new stadium, and by 2008 they had some of the richest owners in world football. This is a club with one hell of a story to tell… 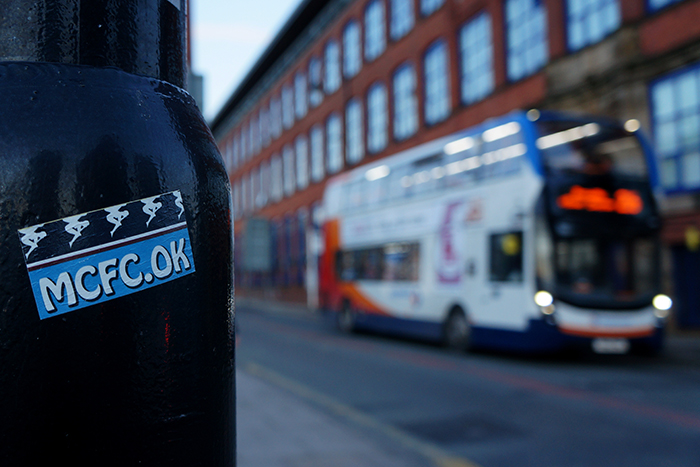 This is laser blue and this is Kappa. This is what City looked like once. With a Stagecoach bus through Ancoats added for effect.

I started here because this is where the modern City begin. They were City….O.K. They were harmless, yo-yo’ing and doing so with a sense of humour. Inflatable bananas in hand.

They were the antithesis of United’s commercial machine. The Reds were marching ‘on, on, on’ but City were just O.K. and that was fine. Wasn’t it? 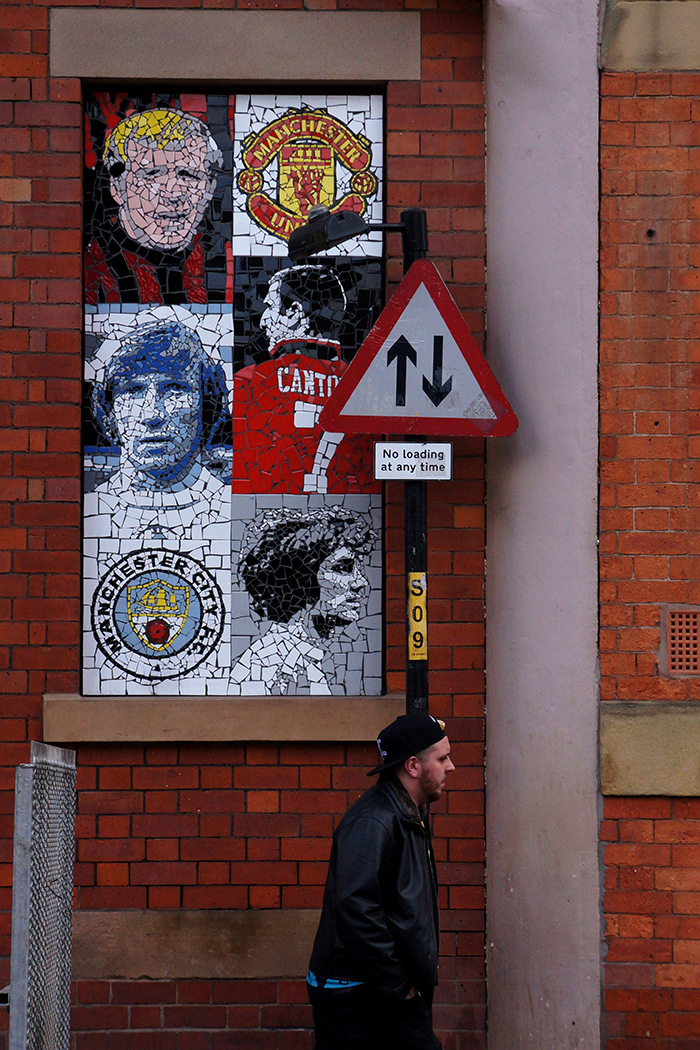 If you go to the Northern Quarter in Manchester then you’ll see this mural. For every Cantona, there’s a Colin Bell. For every Georgie Best, there’s a Franny Lee. For every chap wearing the red ship with three sails, there’s a sky blue vessel on the chest of his neighbour, his colleague or his mate down the pub.

City may have been OK, but they would always be compared to United. At various points in the last 25 years City have been neighbours to one of the finest sides in the world. OK would never do.

(3) Maine Road and the City of old 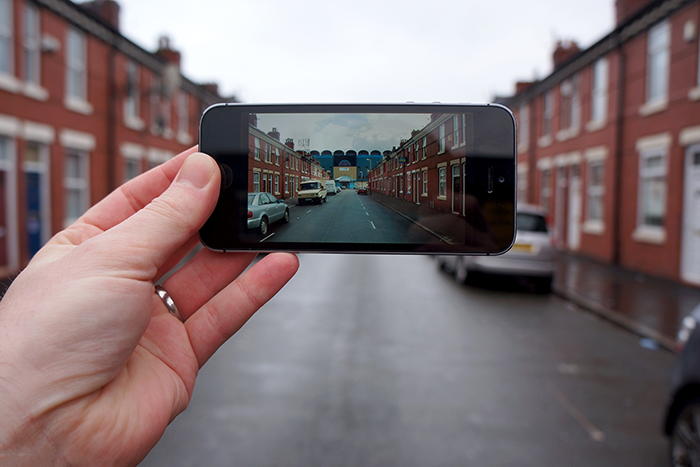 City are big and shiny now. But these streets are where they used to live.

Underneath the inflatable bananas and people in pac-a-macs down the side if the Kippax, City were hurting. To quote a Manchester band in James, “If I hadn’t seen such riches, I could live with being poor”.

City thought they deserved better than a yo-yo existence and had a point to prove. Their future was at a shiny new stadium up the road.

This photo is the only way the new generation will see Maine Road. Makes you think, doesn’t it? 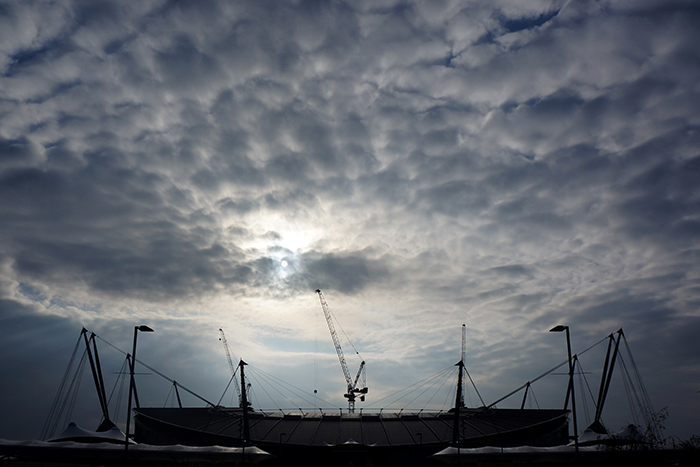 How could they say no to this? There she blows. Shiny and new. The future. No looking back. They even installed a blue moon. Those storm clouds won’t go away though. I guess it would be boring if they did.

(5) The chant from the third tier 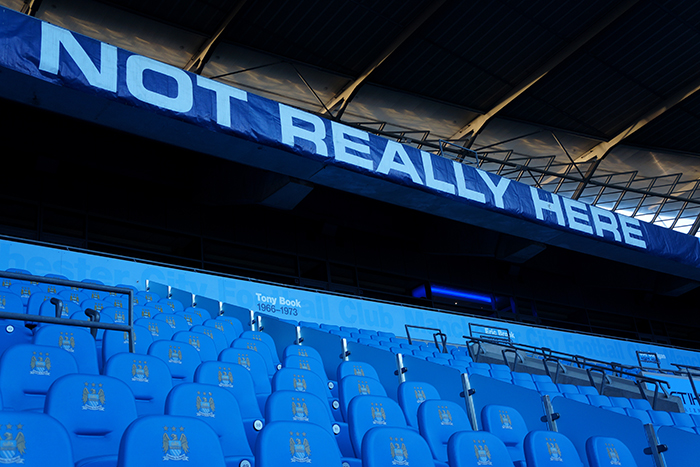 An urban myth of a chant. There are conflicting views on why it was sang in the third division. Some say it’s because aloof City fans couldn’t believe where they found themselves. Others say it was because of how many City fans were secretly in the home ends due to the smaller capacity grounds they visited that year.

If you went into a City pub in Manchester they would have five or six more stores to tell. I wonder how many City fans had to pinch themselves in the Champions League, or when they won the Premier League. Or even when they walked into their 48,000-seater new home.

It may be a chant borne out of their lowest ebb in modern times, but as this rollercoaster rumbles on, it’s never been more relevant.

(6) The badge upon her chest 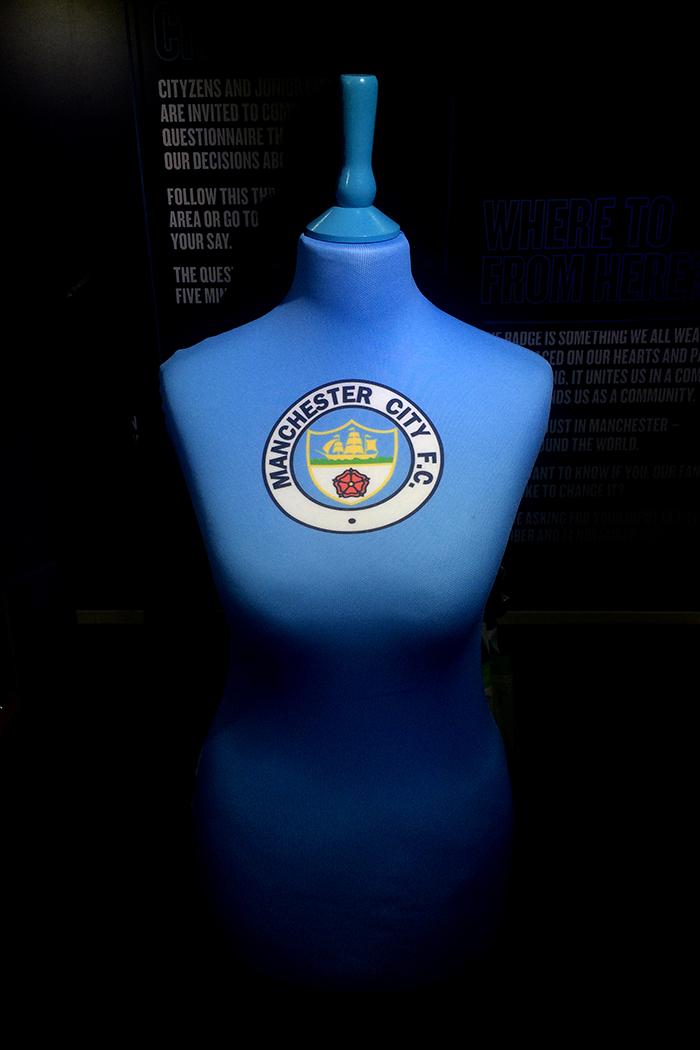 The ship with three sails and the red rose of Lancashire. All you need. City have gone full circle since they started winning again. They now embrace their past and take pleasure in showing the exploits of Bert Trautmann and Malcolm Allison before kick-off.

The roman eagle has gone and if you go explore at the new stadium, you will find a small stone marking the passing of Maine Road. Remember what I said about having a point to prove? Well, I think the last few years have made this club more comfortable in its own skin.

They aren’t running away from their history anymore. Is that Laser Blue she’s wearing? 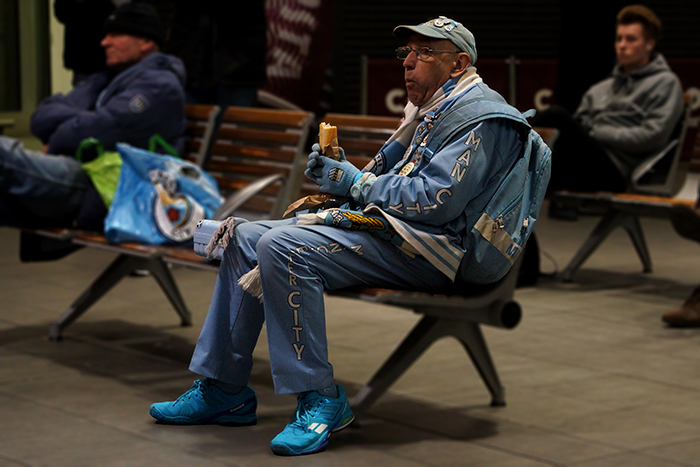 Now let’s get on to a matchday, shall we? Just google Pete the Badge. I write this with pure respect and love. Oh what a trip on this rollercoaster he has had. What ups and downs he has seen. If you look at the front row of the Colin Bell Stand, he will be there, complete with MCFC cushion. If you see him around, say hello. He’s a gent. Even if he did crack on with his tea while I asked him for a ‘street shot’.

I’m going to write something now that I find myself writing every month: You can have your billion pound TV deals and your Arab sheikhs, but football clubs, ‘club’ being the operative word, are built on people like Pete. Barcelona away or Barnsley away. It doesn’t matter. Pete will be there. 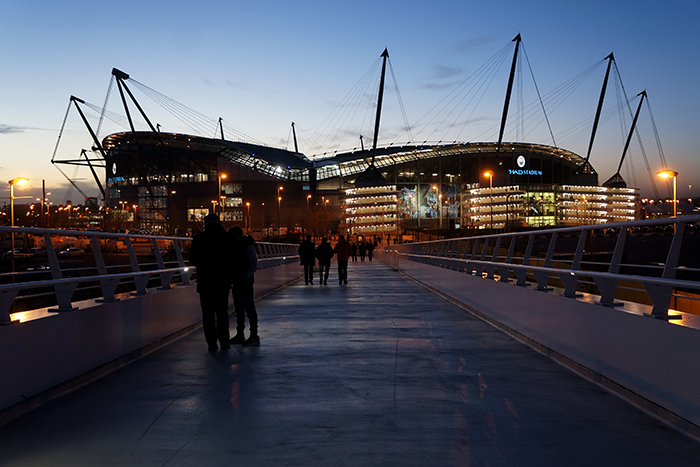 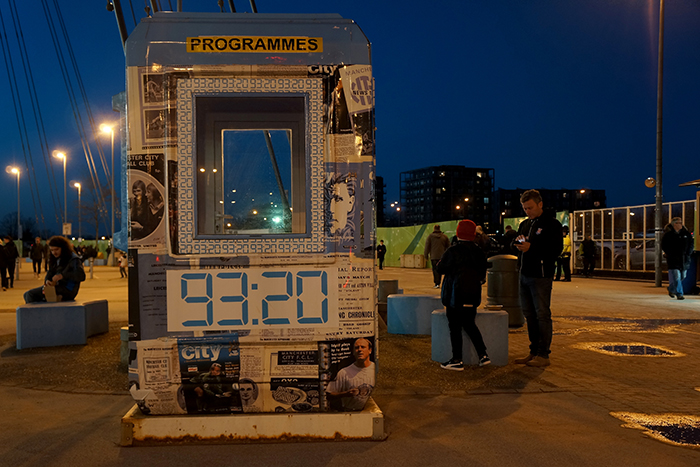 93 minutes and 20 seconds was the time on the clock when Sergio Aguero scored against Queens Park Rangers on May 13, 2012. His goal secured the Premier League for Manchester City.

I walked around for ages and couldn’t see a programme booth with the time of Paul Dickov’s equaliser against Gillingham at Wembley in the 1999 third tier play-off final. There must be one somewhere? 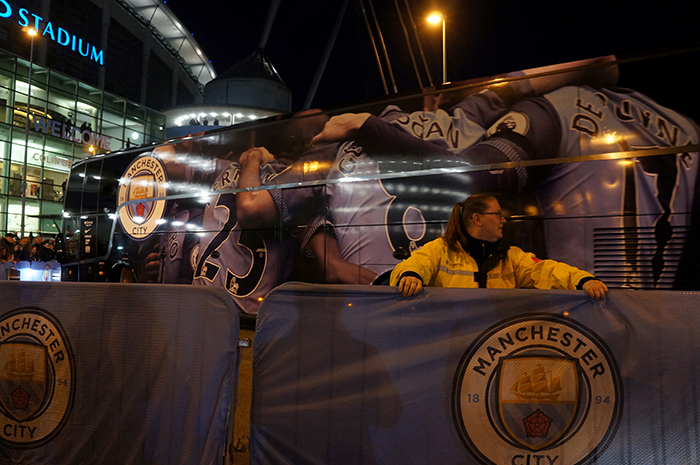 “All your dreams are made when you’re chained to the mirror and the razor blade” is the opening line of Oasis’s ‘Morning Glory’. I never thought I’d hear it whilst being worked up into a frenzy as a coach pulled in. It’s quite a spectacle, though.

The players are escorted in by police bikes like the celebs that they truly are. I waited all night for Kevin Horlock’s autograph and couldn’t get near. 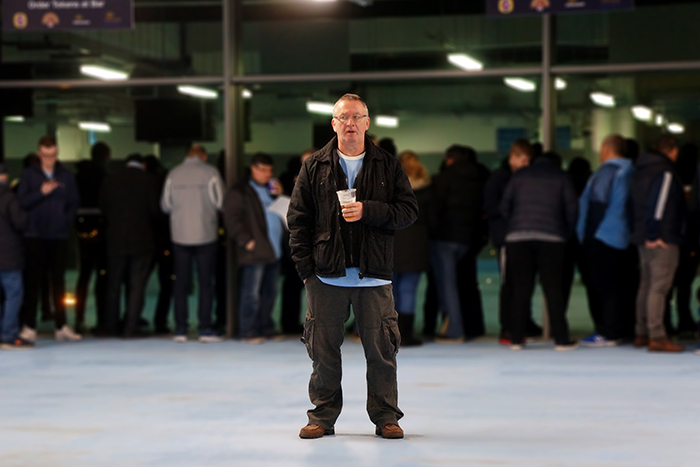 We’ve had Pete the Badge followed by the buzz as you approach the stadium at sunset. Let’s just stop for minute and consider ourselves. Intense halogen lighting, meal ‘deals’ for £9 and too many people in fluorescent jackets. I saw this bloke rush in, grab a pint and then let out an audible sigh. He had made it. How many of us do that on a match day?

My mind wandered. I could imagine him running home from work – quick shower, shirt on and out the door. The relief as the pint signified the start of his time. Football clubs would do well in this era of hospitality lounges and out of town stadiums to remember the man and his pint. Just don’t interrupt him. 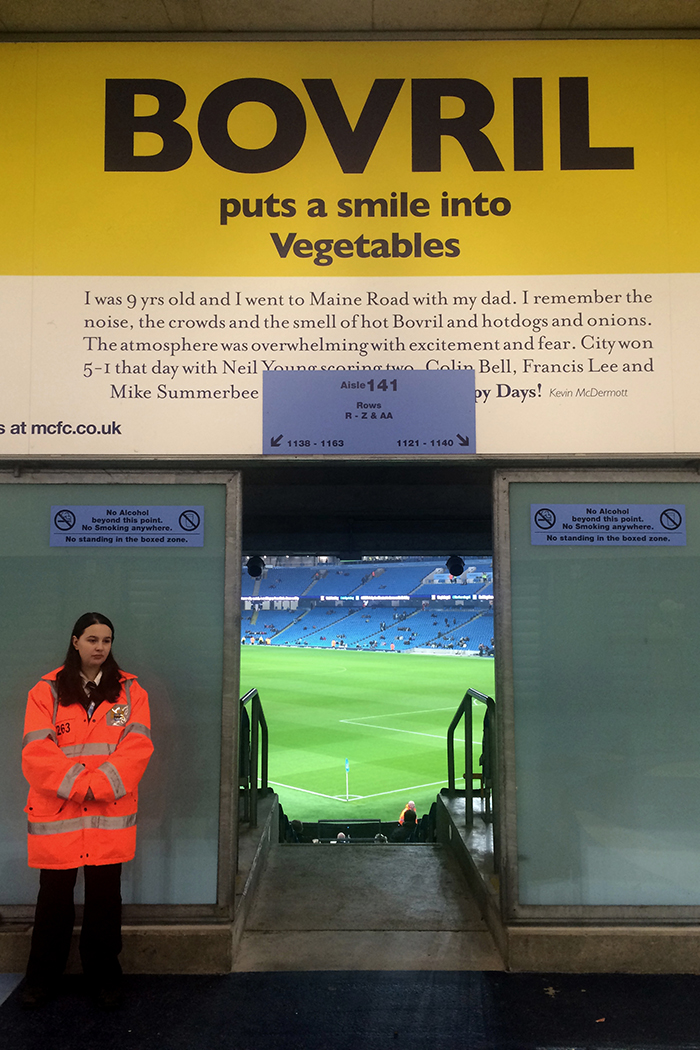 Go on love, just a little smile. For me? Please? 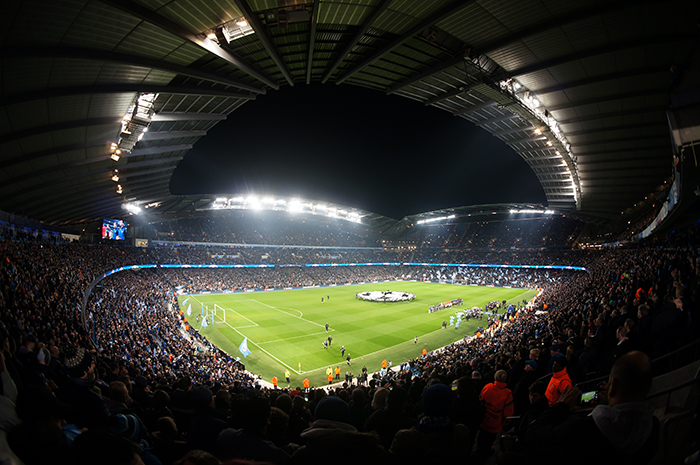 And…you’re in. Pint down, £3 programme under your arm. Out of the strip lights and into the stadium proper. It’s Champions League night. The world is watching.

Plenty in the ground will never remember Maine Road. Do you pine for it on nights like this? 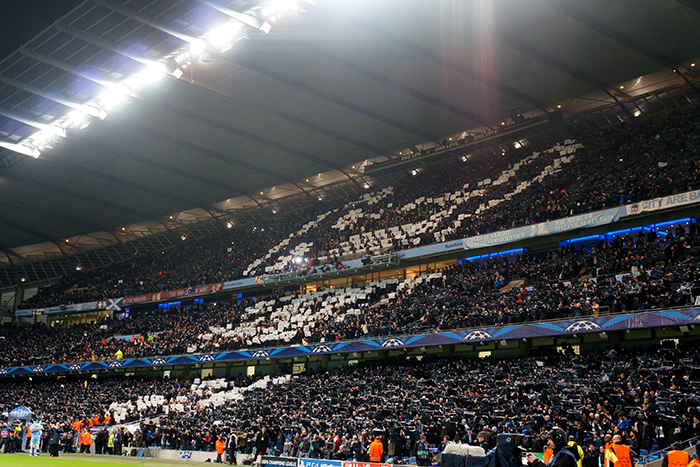 What do you buy the club that has everything? This is the only one left now. The real one isn’t made out of binbags either. 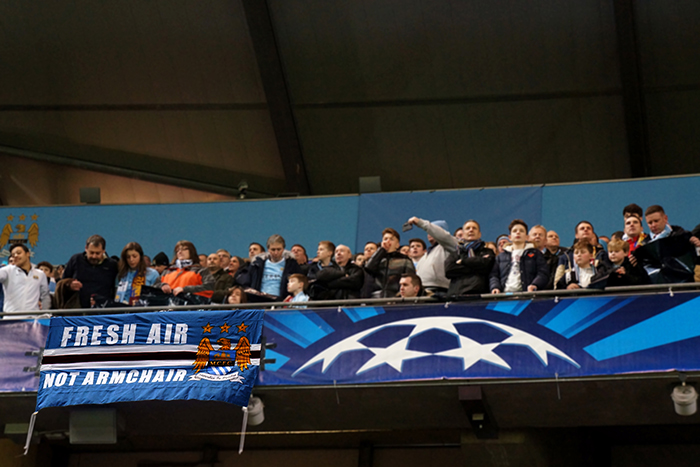 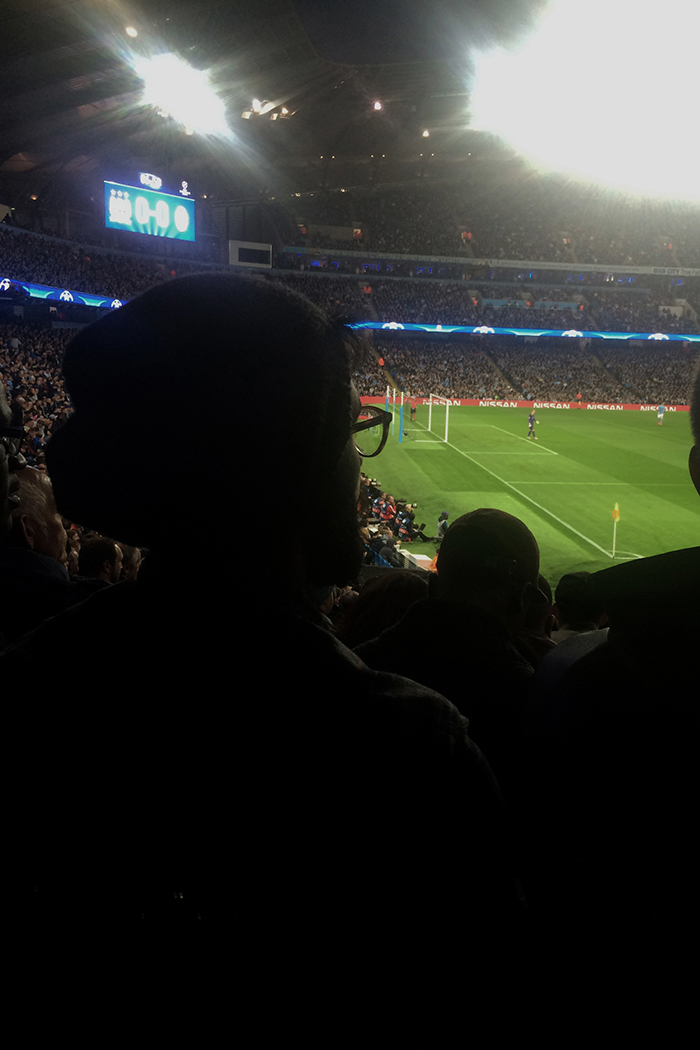 Not every fan remembers Gerard Wiekens, and if you lay out the Champions League, then the new wave shall flock. Beard, specs and beanie in place. This gent sampled a craft ale while discussing the merits of the WM formation shortly after this photograph was taken. 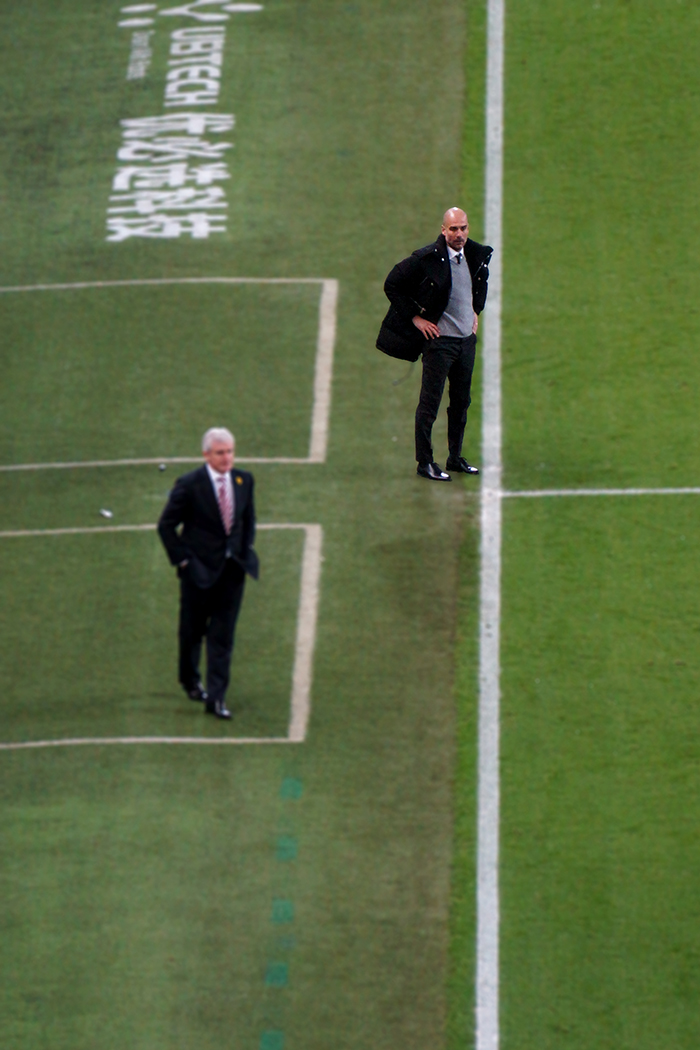 The finest exponent of tika taka football in Europe…pictured here with Pep Guardiola. A joke for the editor there. Only the best for City, at any cost. 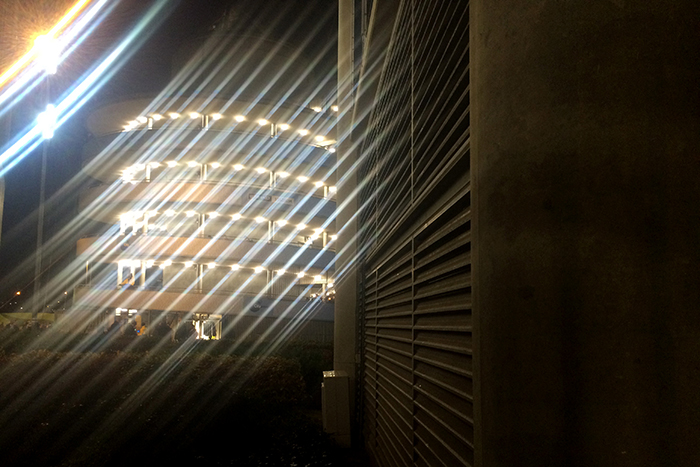 San siro-esque. It’s half-time. Unplug from the world class fayre on the pitch and enjoy every modern luxury. This is the view from the gents. Probably the best in football – I told you it was only the best for City.

Perhaps ‘view from the gents’ can be a new series of photographs for Planet Football? What do you think? Perhaps don’t send your own in just yet. 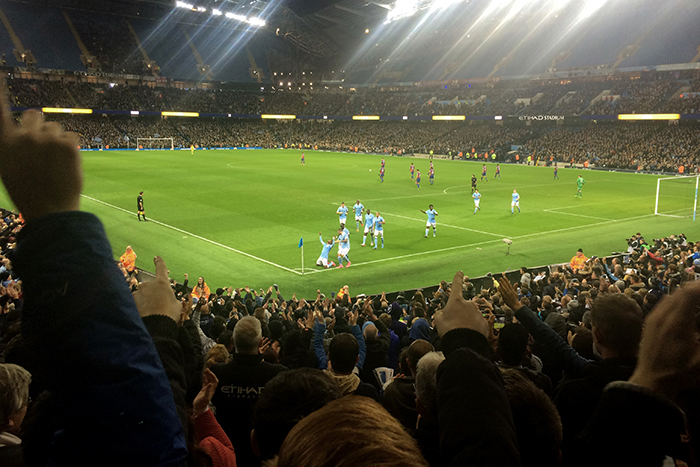 Goal. Kelechi Iheanacho. Remember what I said about coming full circle? In the modern squad, among the Agueros and the Yayas is youth. Pep is big on it and doesn’t care if the success isn’t instant. Think De Bruyne, Sterling, Sane too. The future is very bright round these parts. 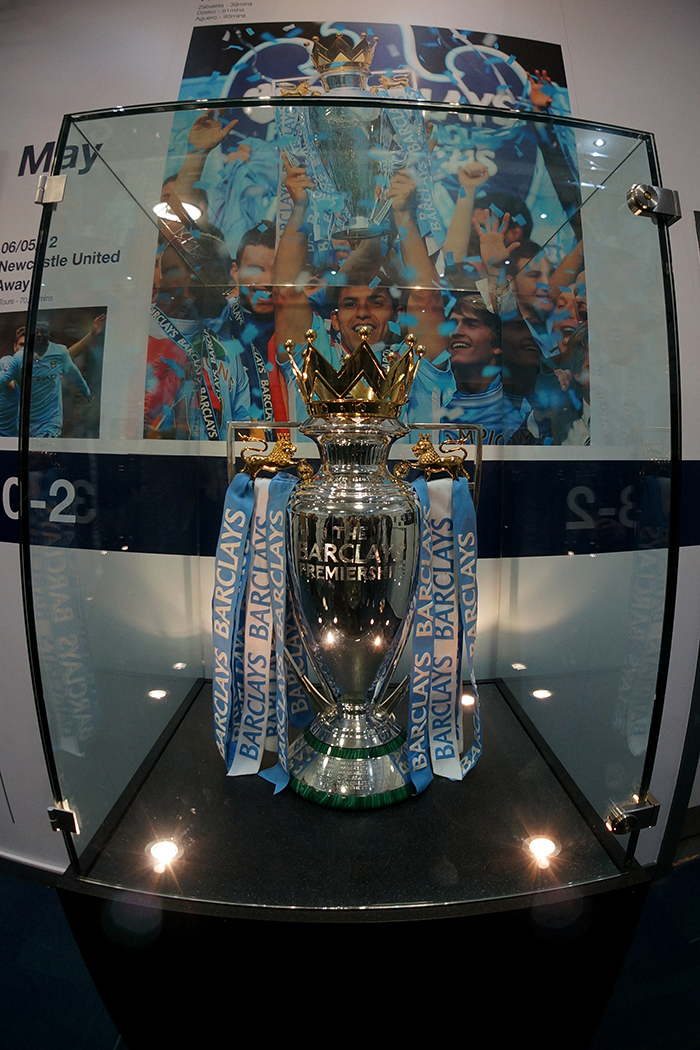 This had to be in here. As much as I rumble on about history and match day experience, if you want to get inside the head of City, then you have to look at this trophy. This was won in the 93rd minute of the last game of the 2012 season, on goal difference.

City had all the money in the world but hadn’t won a league since 1968. The monkey on their back was a rather well-built gorilla. 2012 had to happen, it needed to happen.

I always have my rose tinted specs on, but think of the history. Watching United lift trophy after trophy from their old ground in Moss Side. New badges, new shirts, new beginnings over and over. The cold hard reality was that they needed to put the league trophy in the cabinet. Here she was.

The mood lifted. The monkey gone. The relief palpable. The enabler allowed all that followed. It allowed City to be at peace with being City again. 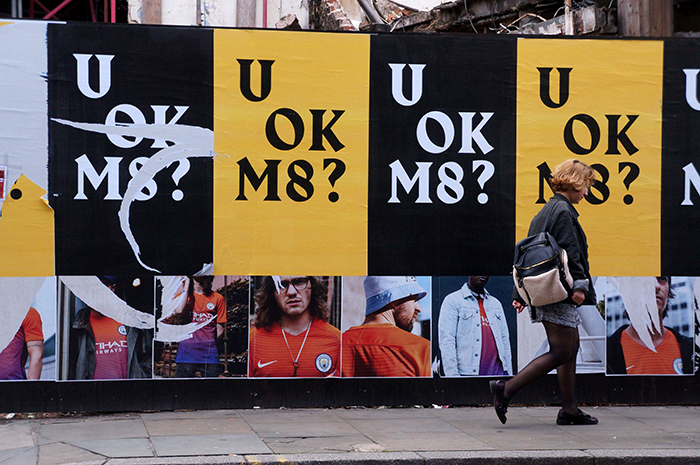 Back to the Northern Quarter. In 2017 it’s where they advertise their away kits. Certainly at peace with their world. This is City. Back at the top table and belonging.

I wonder if this one comes in Laser Blue?