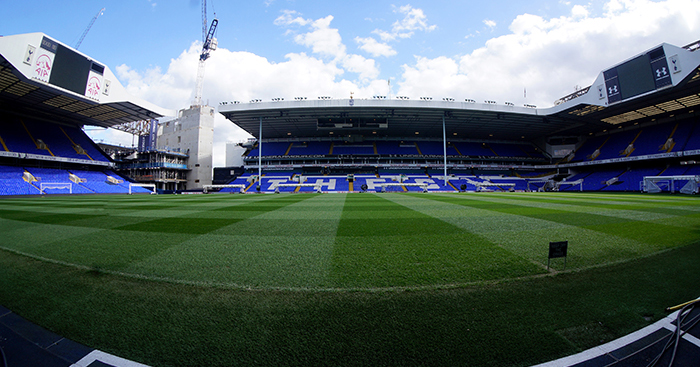 Tottenham Hotspur have left White Hart Lane for good, but the memories of a match day will stay with supporters forever more.

Let’s go back to basics. These galleries are always about home. We tell a story, we try to share history and enliven, but ultimately, we know that what really makes a club is its sense of place, its ground, its home.

When you talk Spurs, you have to talk about White Hart Lane. The old girl is in the process of being flattened to make way for a new stadium, with all the bells and whistles you would expect. Wembley is being borrowed for a season, meaning no football down the High Road for the first time since 1899.

The Spurs are coming back, but it’s still a farewell. 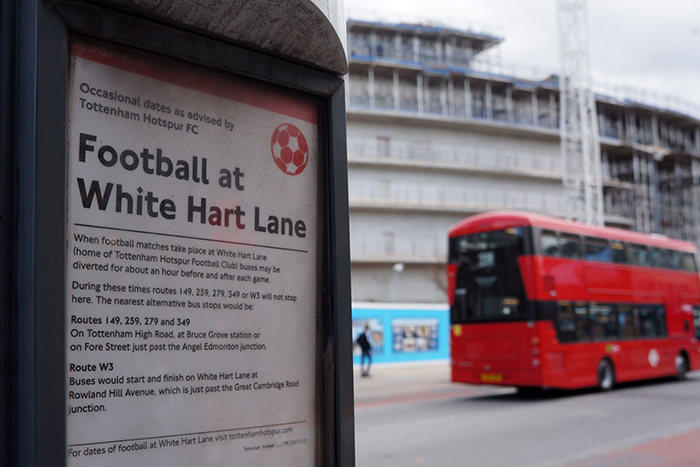 A Football club as it should be. A focal point for a community. A beating heart. A reason to divert the buses, stop the traffic and shut the roads.

This little stretch of London’s north suburbs will take a breather this year, but those occasional dates will come again. Quite right too.

(2) Seven Sisters. Where it begins. 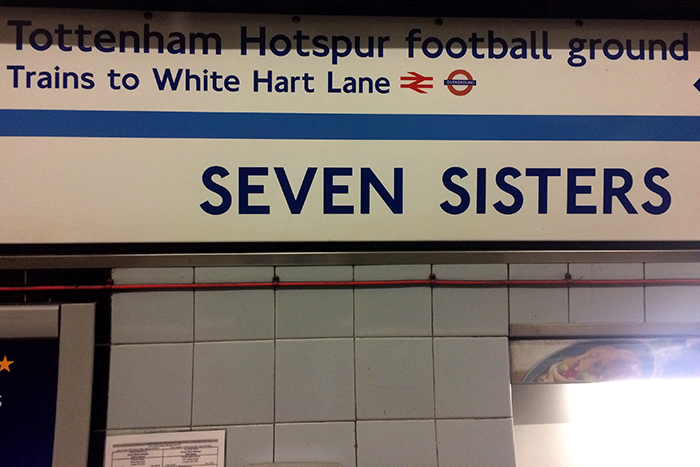 Certainly for me. For the northerner who can get anywhere from Euston but who’s stuffed beyond that, this is my Spurs arrival. Only a 40-minute walk to the ground. Swing by the ‘offy for a couple of cans and it soon goes by. 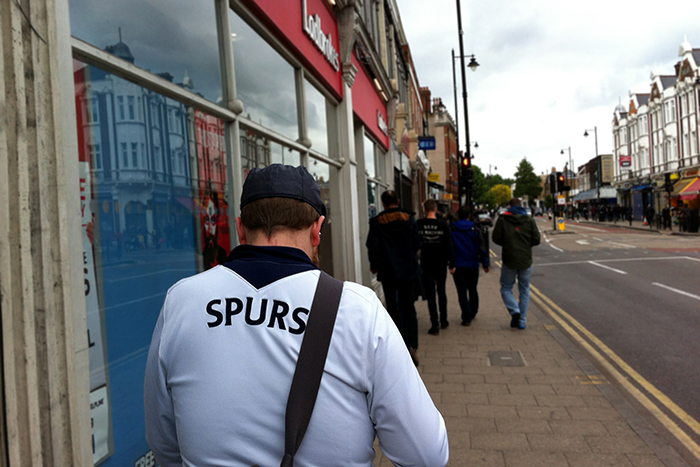 A 40-minute walk from the tube is just an opportunity to get the camera out. This picture was taken on May 11, 2014. Tim Sherwood’s last game as manager. The daydreamer in me saw Mr Spurs being left behind by his ‘top four’ mates up the road.

How wrong was I? Pochettino & Co soon sorted that one out. 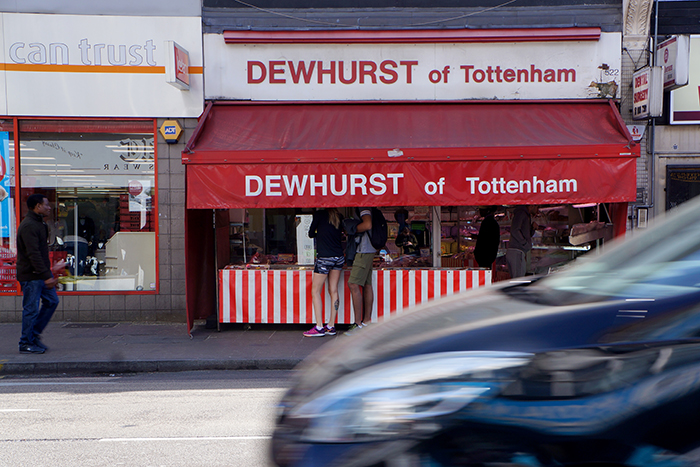 Keep walking up the High Road and you’ll see one of my imaginary heroes. I don’t know this to be true, but I imagine Mr Dewhurst of Tottenham to be a massive Gooner. Red and White round these parts is too brave to be an accident. 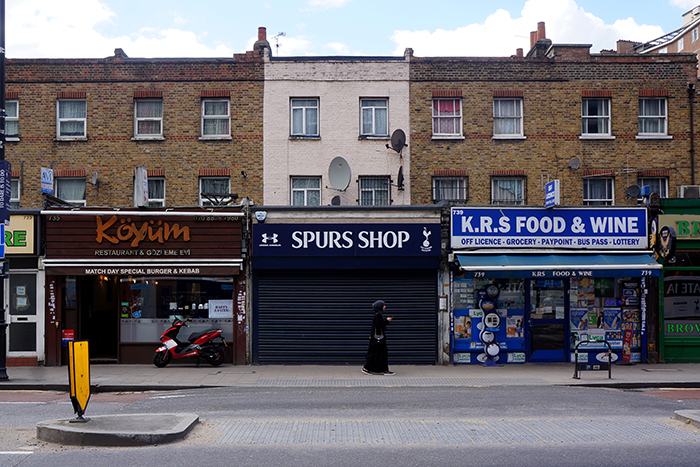 I’ve said in previous galleries that you should always walk around the ground because it gives you a sense of place. Outside the Lane you find a bustling suburb of good, honest, multi-cultural, modern, working-class London.

Spurs undoubtedly could have left. But they didn’t. They stuck with it. They invested in these streets, in these people. Tottenham in Tottenham. For better or worse. 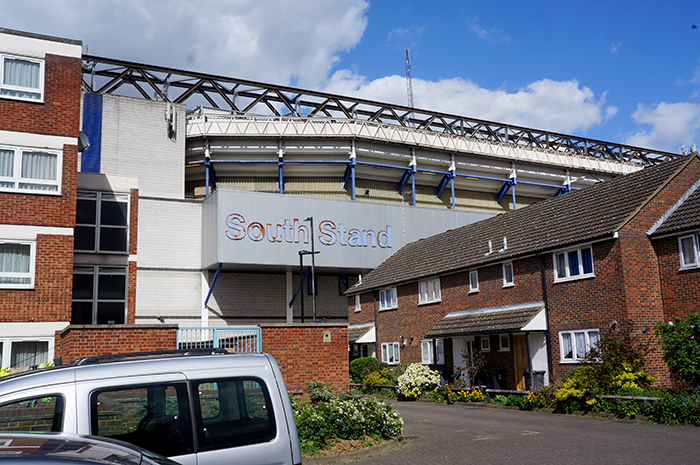 She was full of history and a grand old place to play. Tucked away down residential streets, quite a way set back from the High Road that served her so well.

The old Lane was a functional facility from the outside: the smoked glass of the 80’s West Stand apart, this was a proper ground, with the focus put on the supporter within. Time to hide in a pub and wait for permission to enter.

(7) Upon the High Road in days gone by 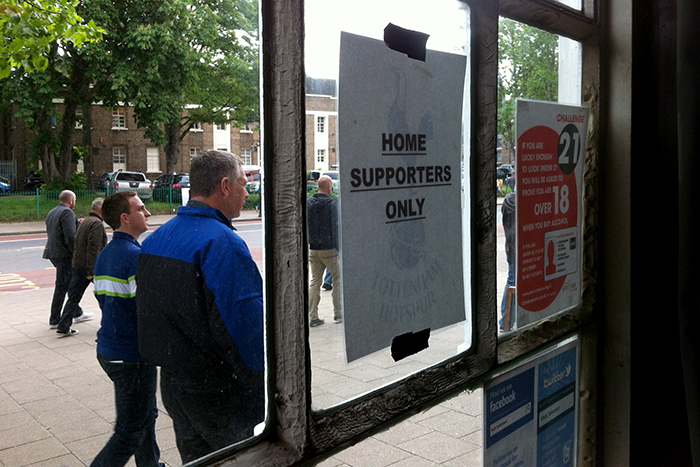 Proper pub right by the ground. Watching the crowds go by. I put my best cockney accent on that day. They never knew…(me old treacle, etc). 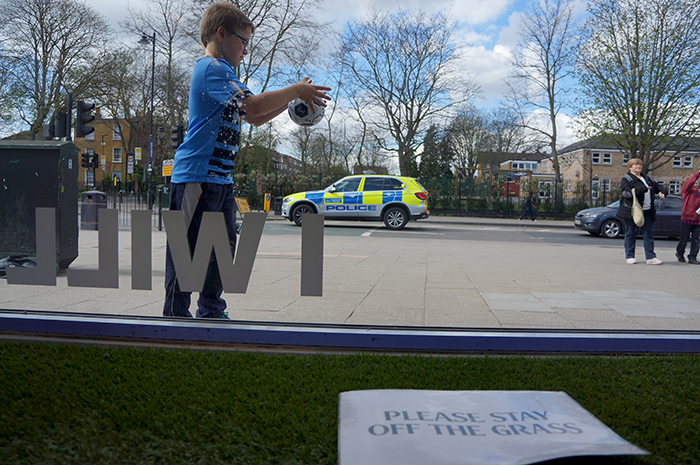 April sun. The pubs as snarling and ‘proper’ as ever. On my last visit, the club shop felt like an oasis. That air-conditioned room full of ‘new shirt smell’ was a welcome marker of my arrival. I caught this young man through the window.

The High Road was doing its metropolitan thing, but there he was. Keepie-uppies to be practiced, oblivious to it all. Even the branding on the window graphic helped set my scene, “I will”. Yes son, keep it up. You will.

(9) Cockerel to the front. Names to the back 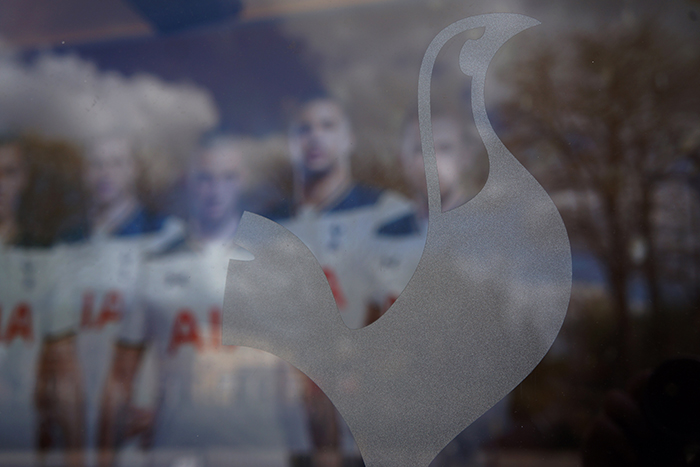 The Fighting Cock, the Cockerel. The Spurs tied to its legs. The enduring symbol of this football club. What I will say about a visit to the Lane was that you always felt, even in these commercial times, like the name on the front of the shirt was more important than the names on the back.

(10) The Lane of Archibald Leitch 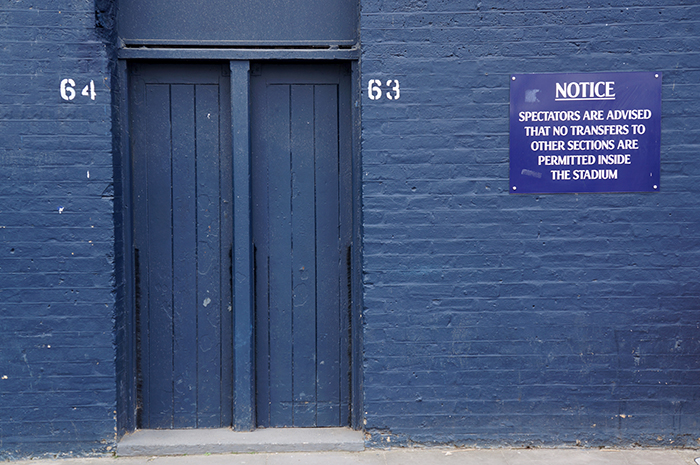 There’s history in the paintwork. Every single layer of it. The Shelf Side has stood in more or less its present guise since 1936. It will never be the same again. 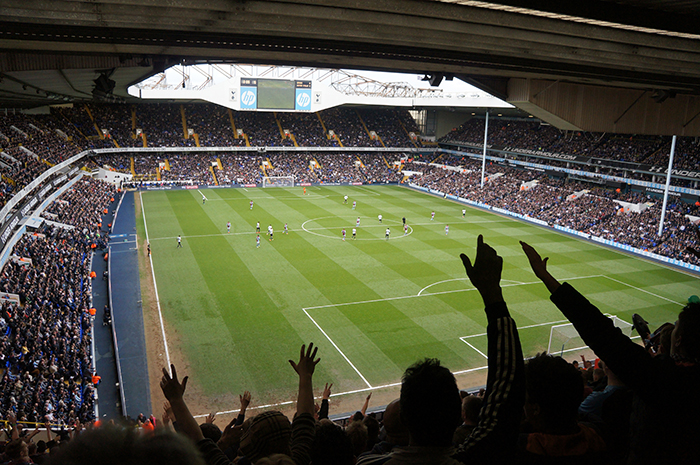 Tightly packed. Smallest pitch in the top flight, high raked stands on all four sides. Close to the touchline. Intimate. Atmospheric. A throwback……Glorious! 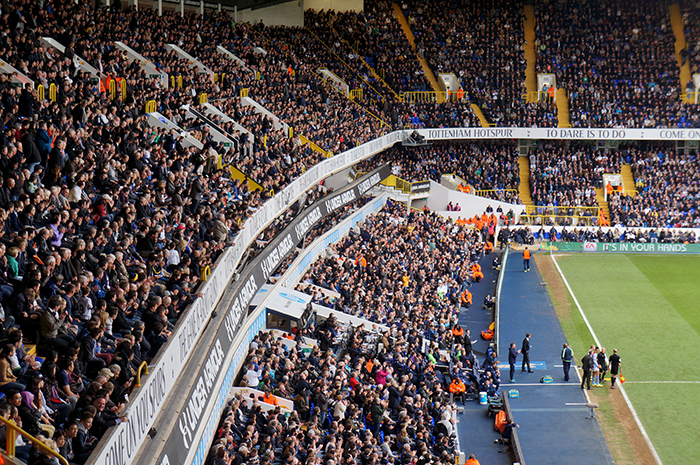 From the away end you feel like you can reach out and touch the ball. You can almost sit in the Directors boxes, or perhaps you would prefer the dugouts? How about a seat in the double decker executive boxes in the middle?

(13) Football for the future of the past 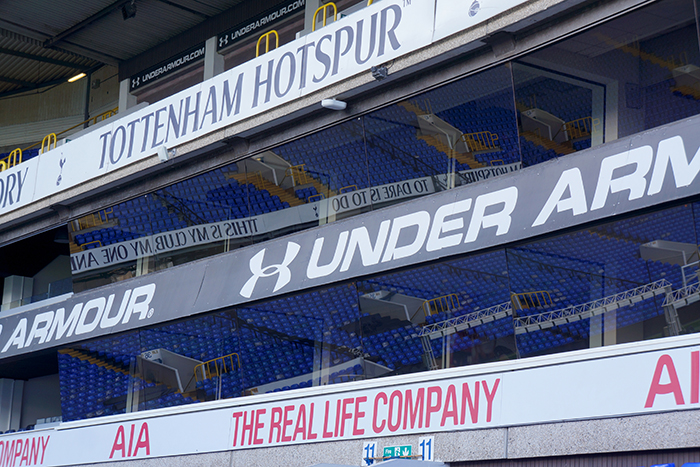 Those executive boxes though. I have grown up thinking of those as the absolute height of sophistication and luxury. Spurs were a big fancy football club, in my head, because they had two rows of smoked glass executive boxes.

The new money in football has made even the most equipped stadiums of the 80s and 90s redundant. Football behind glass. How lavish. That was someone else’s vision of the future. Now it exists only in the past. 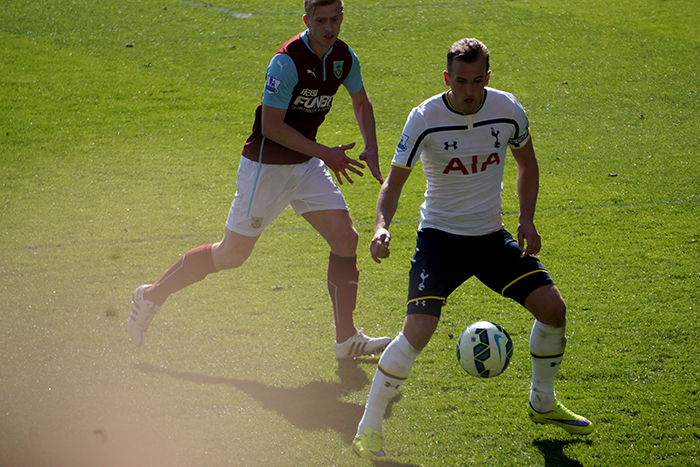 This bloke will probably lead Spurs out at the new Lane. Harry Kane. One of their own. Homegrown talent, talisman and most importantly, a goal scorer. Every bit the local hero and part of the feelgood factor at Spurs. 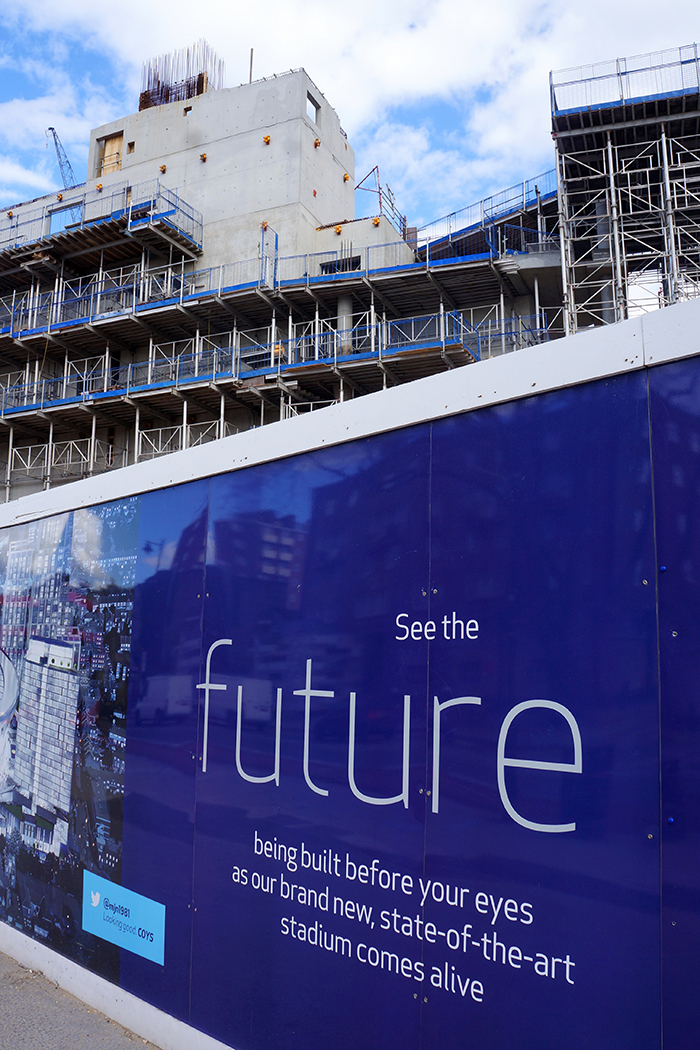 I can’t say it any better. See the future being built before your eyes. Just make sure you still see the past too. 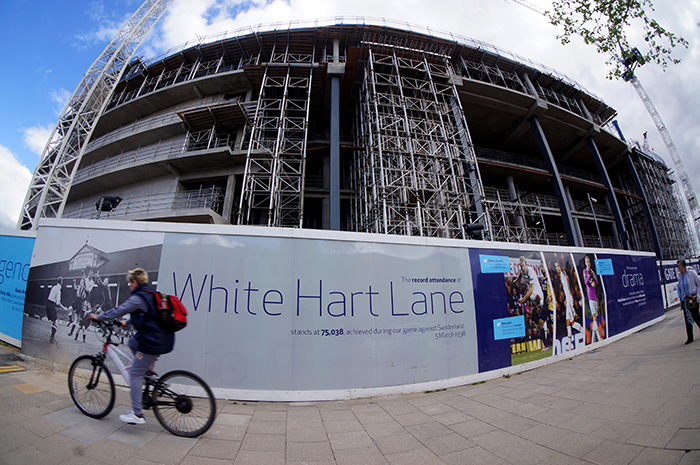 I noticed one thing about the new gaff. It’s right by the pavement. It hugs the High Road, physically and metaphorically. Will it carry on where the old White Hart Lane left off? 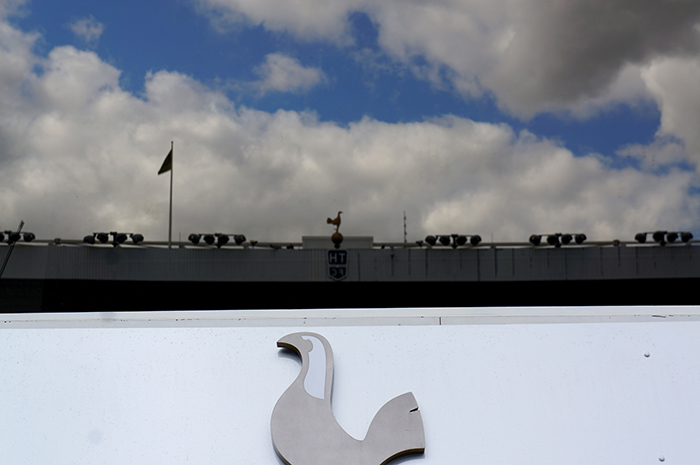 I could have shared a picture of the golden cockerel stood on the ball. You’ve seen it a million times, though. Here’s that same cockerel reflected in the smoked glass of that fabulous West Stand.

Another Cockerel (yep they love ‘em round here) that sits above the players tunnel is sneaking into shot too. This was old and new, but it’s now older and newer. All of it has gone. Future now certain. 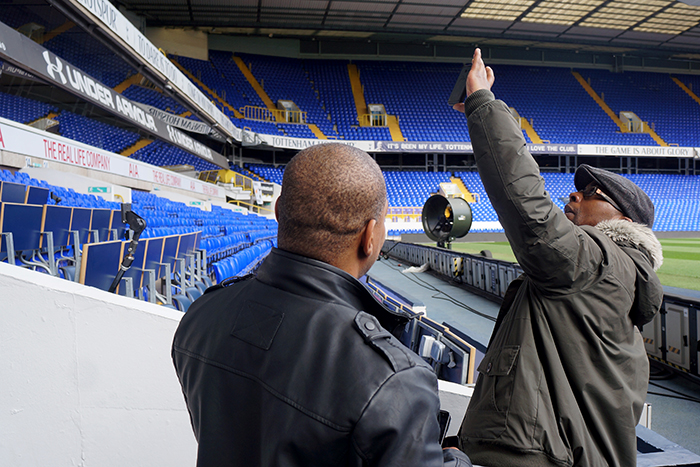 And so, we all, collectively, say goodbye. How? With visits and with pictures. Pictures of seats, of concrete and steel. Pictures of trophies and shirts gone by. Pictures mainly of us stood in various locations around a green rectangular lawn in north London.

That misses the point, though, doesn’t it? These things we want a picture of are physical manifestations of abstract concepts. Belonging, nostalgia, comfort, familiarity, family, friends, habit. Dare I even say it, Love. 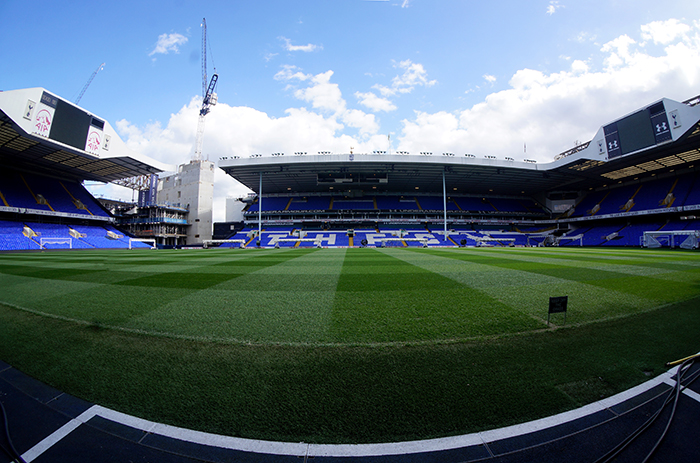 It was April 1, 2017 when I had a chance to get inside the Lane one last time. Construction work on the new Lane was at full tilt. Cranes moving above my head. The echo of hammers hitting steel.

The obvious change was the far left corner. It was gone. An ongoing reminder that the end was nigh. I took it in one last time. I’d seen some fantastic games there as a visiting fan over the last 20 years. Another one bites the dust.

(20) No place for sentiment 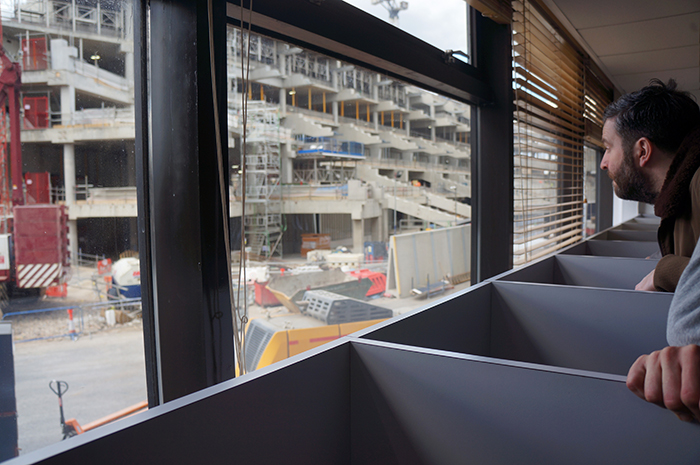 Dust being the operative word. They weren’t hanging around. The sights and sounds within were relative calm compared to the view outside. Every single nook and cranny that they could build upon had been taken. The rent on Wembley had to be kept to minimum. Within a day of the last game, the demolition of the old place had begun. No going back. 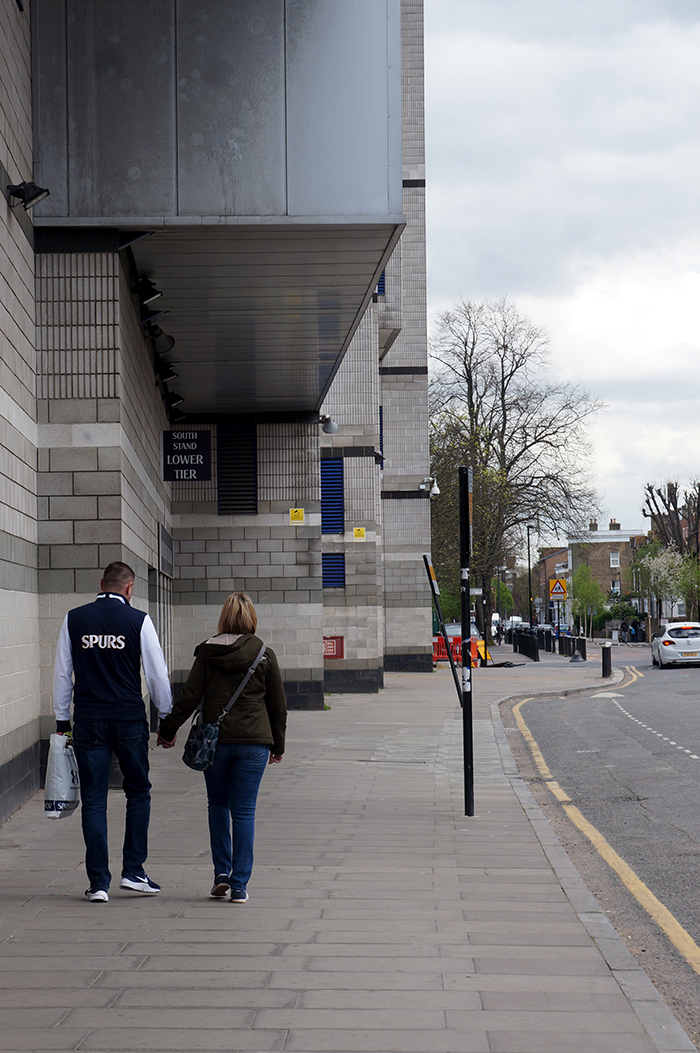 There we have it. One last walk, hand in hand, down the Park Lane.

The Spurs will be back. It will be the same, but different. We’ll still have that walk from Seven Sisters, though…