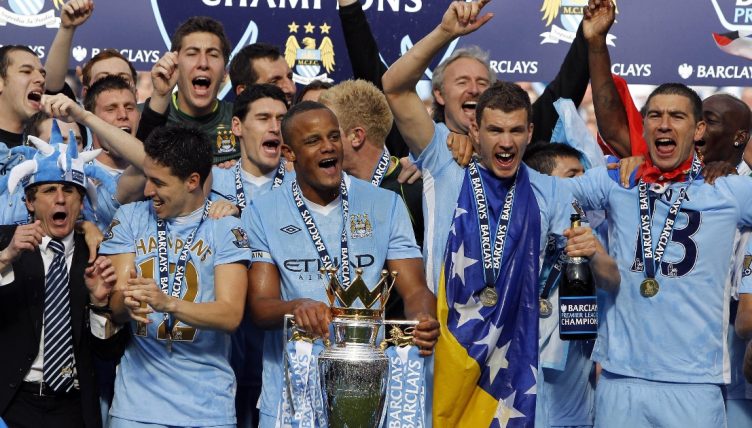 On May 13th, 2012, Sergio Aguero scored one of the most famous goals in English football history to clinch the Premier League title for Manchester City.

Aguero’s goal, struck past Queens Park Rangers ‘keeper Paddy Kenny with 93:20 on the clock, meant that Roberto Mancini’s City won 3-2 on the final day, securing three points that were vital in finishing top ahead of their hated rivals Manchester United.

QPR came into the contest battling against relegation, and were up against it when Joey Barton was sent off against his former club for lashing out at Carlos Tevez.

But Mark Hughes’ men came from behind to take the lead against all probability, responding to Pablo Zabaleta’s first-half opener with counter-attack goals from Djibril Cisse and Jamie Mackie.

City were behind until injury time, when all hell broke loose following goals from Edin Dzeko and Aguero. QPR ended up surviving regardless because relegation rivals Bolton had failed to beat Stoke.

“We went behind against QPR before they went down to 10 men at a certain point,” Mancini told Sky Sport Italia in 2016. “It was both fortunate and unfortunate because they then put all of their men behind the ball, which never happens in England.

“We scored the goal to make it 2-2 in the 92nd minute thanks to a [Edin] Dzeko header, with the referee having put only four minutes of added time on the clock.

“When play recommenced, the QPR manager told his players that the other game had finished and that they were safe, and so instead of knocking the ball around they simply kicked a long ball forward.

“It was the 92nd minute, and I still shudder when telling the story. I prayed to the Virgin Mary and said: ‘You cannot possibly abandon me now.’

“The ball fell to [Mario] Balotelli, because he is always there at the end, and whilst being fouled he was able to give a ball on the slide to Aguero, who at 93 minutes and 30 seconds scored the decisive goal. We were strong enough to play until the last second and it still brings me a great thrill to think of it.”

Here are 12 amazing stats from one of the most iconic games in Premier League history.

– The title-clinching victory set a new record for the latest comeback win in Premier League history. The record stood for almost a decade, eventually being broken by Tottenham’s win over Leicester back in January.

– Mario Balotelli made 70 Premier League appearances for Man City and Liverpool, totalling 3944 minutes. In that time he only registered a single assist; the pass for Sergio Aguero’s match-winning goal.

– Aguero’s goal meant that Manchester City moved level on points with United in the final minutes of the Premier League season. It’s the only time in Premier League history the title has been decided on goal difference.

It's a decade to the day since one of the Premier League's most iconic goals and the greatest moment in Manchester City's history.

– Nigel De Jong and Yaya Toure played a half each for City. They completed 57 and 60 passes respectively; 117 in total. QPR collectively completed 87 between them; City completed 651 in total.

– The hosts’ rate of 81.3% possession was a new Premier League record. It was eventually broken when Guardiola’s City in a 5-0 victory over Swansea City in April 2018.

– Manchester City took 19 corners against QPR, who won none. Edin Dzeko’s injury-time equaliser came from the last one.

– City’s total of 44 attempts on goal remains a Premier League record. Mancini’s men registered 44 shots and 15 on target. Paddy Kenny made 12 saves; two fewer than the record held by David de Gea (against Arsenal, 2017) and Tim Krul (against Tottenham, 2013).