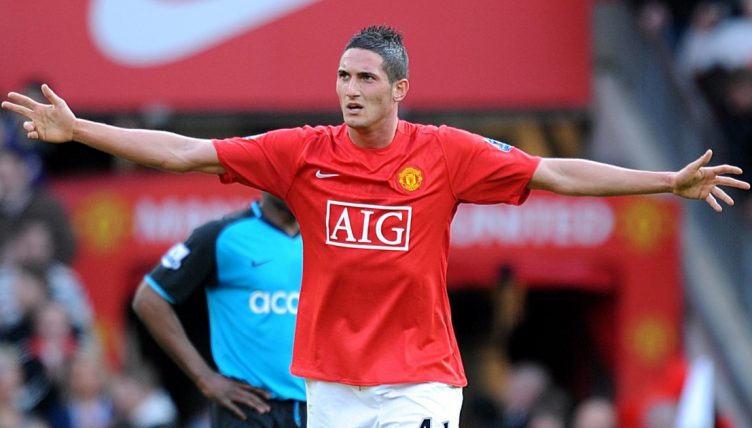 Manchester United’s academy has produced some great British players over the years – but what about the special young players that aren’t from these shores?

United have scouts in lots of different countries and they look to bring the world’s best and most exciting young talents to Old Trafford.

We’ve taken a look at the eight non-British or Irish players to win United’s Under-18s Player of the Year award and how they’ve fared since.

Djordjic, who was born in Serbia, made six first-team appearances for Brommapojkarna in his adopted home of Sweden before joining United at the age of 17 in 1999.

The winger won the Under-18s Player of the Year award in his debut season and was even compared to Ryan Giggs but failed to live up to that initial promise.

He made his Premier League debut in a 3-1 defeat against Tottenham in May 2001, while his second and final United appearance came in a 4-0 loss to Arsenal.

After leaving Old Trafford in January 2005, he then embarked on a nomadic career with spells in the Football League, Scotland, Denmark, Serbia, Hungary, Belgium, Sweden and India.

“It has taken me a long time to come to terms with what happened at United,” Djordjic later told the Daily Mail. “I was 17 and people were expecting big things. I wish I’d worked harder. I wasn’t lazy but I didn’t go the extra mile.

“If we were running, I’d be happy to coast in the middle of the group rather than to try to get to the front, to make myself fitter. I rarely missed a chance to go out and hit the bars and clubs.”

After playing for the American Under-17 squad at the Milk Cup in 2003, Spector impressed United’s scouts and later won the Jimmy Murphy Young Player of the Year in his debut season.

He made his senior debut against Arsenal in the 2004 Community Shield, becoming the first American outfield player to turn out for United.

But that was one of just eight United appearances for the defender, who joined West Ham in a £500,000 deal in the summer of 2006.

Ironically, the standout performance of Spector’s career came when he scored twice against United for the Hammers in a League Cup quarter-final in 2010.

The former USA international later played for Birmingham City, Orlando City and Hibernian before hanging up his boots in 2019.

Rossi was only 17 when he joined United from Parma in 2004 and looked set for a bright future at Old Trafford.

He won the Under-18s award in his maiden campaign and followed that up with the Denzil Haroun Reserve Team Player of the Year award in his second season.

The American-born forward, who represented Italy on the international stage, also scored four goals in 14 first-team appearances but was behind the likes of Cristiano Ronaldo, Wayne Rooney and Ruud van Nistelrooy in the pecking order.

He had loan spells at Newcastle and Parma in 2006-07 before joining Villarreal on a permanent deal, where he scored 82 goals in 192 games in all competitions.

Unfortunately, a series of knee injuries have blighted his career in recent years, and the striker spent 2021-22 at Serie B side SPAL.

#OnThisDay in 2011, Giuseppe Rossi scored this brilliant goal for Villarreal against Twente. A brilliant player with terrible luck. What a finish. A sort-of scooping curler. Sander Boschker never stood a chance. pic.twitter.com/BVa8o8LNPc

Unlike the other players on this list, Macheda was a household name before he picked up the Under-18s Player of the Year award.

The striker joined United at the age of 16 in 2007 and immediately showcased his goalscoring abilities in the Under-18s and the reserves.

He then burst onto the scene by coming off the bench to score a stoppage-time winner against Aston Villa on his senior United debut in April 2009.

“To this moment, it remains the best football day of my life,” he told ESPN in 2017. “I woke up and I was on the front page of newspapers all around the world. My friends were calling me from Rome and crying down the phone.”

The Italian also scored a winning goal against Sunderland a week later and was unsurprisingly named the Jimmy Murphy Player of the Year in 2008-09.

But everything went downhill from there, and he was released by United in 2014 after a series of unsuccessful loan spells.

The 30-year-old now finds himself playing for Panathinaikos and has scored 40 goals for the Greek side. 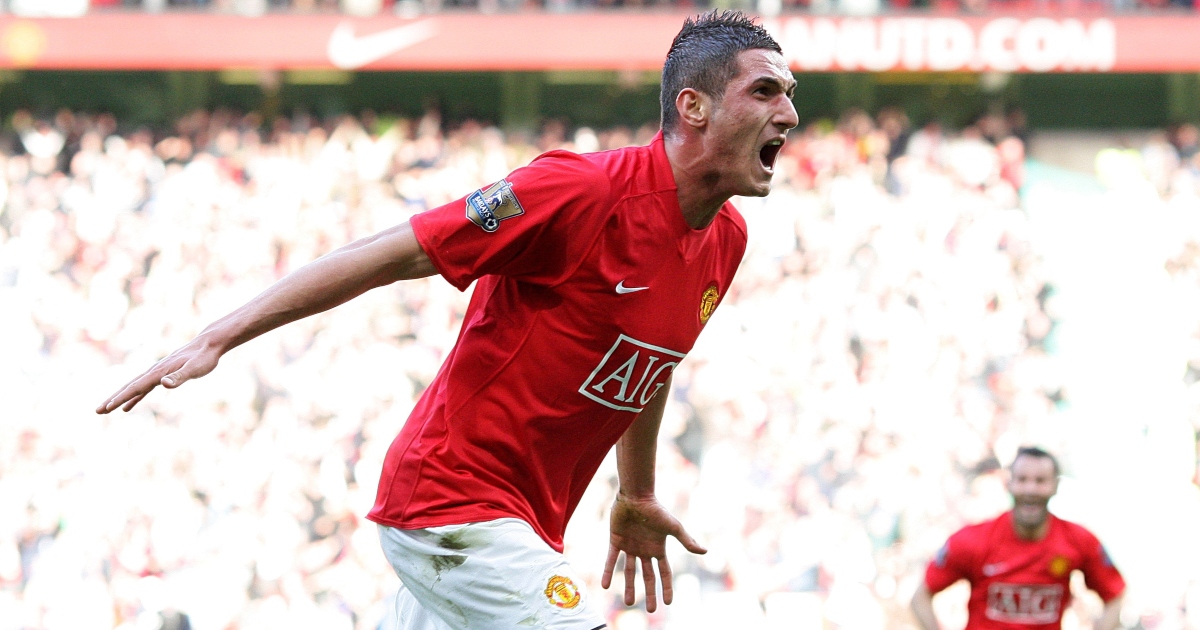 A technically gifted midfielder, Daehli was compared to Xavi by some of his youth coaches and joined United’s academy at the age of 15 in February 2011.

Despite playing alongside the likes of Adnan Januzaj and Andreas Pereira, he won the Under-18s Player of the Year award in 2011-12.

But the Norway international didn’t make a single first-team appearance for United and left the club in 2013 to work under Ole Gunnar Solskjaer at Molde.

He then followed Solskjaer to Cardiff City in January 2014 but left shortly after the manager was sacked. The 27-year-old now turns out for German second-tier outfit Nurnburg after spells with Freiburg, St Pauli and Genk.

“I have no regrets,” he told the Manchester Evening News when asked about leaving United. “It is a hard decision when you are young. I cannot say it was the right decision or the wrong decision.

“It is hard for me to say, but what I experienced in the year after I won the cup with Molde and then I got to play in the Premier League.

“It was a dream come true. The first one or two years were personally pretty good, to be 18 or 19 and to have these experiences. I had an injury and the tough times came, but this you have to deal with. I would have had to deal with it wherever because injury problems would probably have come anyway.”

United fought off competition from Chelsea to sign the Feyenoord academy graduate in the summer of 2016.

Chong suffered a cruciate ligament injury in his debut season at United but made a full recovery and won the prestigious award in 2017-18.

He made his senior debut against Reading in the FA Cup in January 2019 and also came off the bench in that Champions League comeback in the Parc des Princes.

The Netherlands Under-21 international is yet to establish himself as a first-team regular and has spent the last two seasons out on loan, playing for the likes of Werder Bremen, Club Brugge and Birmingham City.

Son of former Cameroon left-back Joseph Elanga, Anthony was born in Sweden but moved to England in 2013 and was later snapped up by United’s academy.

The winger netted seven goals and three assists in just 10 games for United’s Under-18s in 2019-20 and won the Jimmy Murphy Young Player of the Year award.

After impressing with the Under-23s in the following campaign, he was promoted to the first team and scored in a 2-1 victory over Wolves on the final day of the Premier League season.

The 20-year-old became a first-team regular under Ralf Rangnick in 2021-22 and got his first Champions League goal in a 1-1 draw with Atletico Madrid.

Anthony Elanga with a MASSIVE goal for Man Utd!

Garnacho, who was born in Madrid to a Spanish father and Argentinian mother, started his career at Atletico Madrid before joining United in 2020.

He had a promising debut season at United as he tried to adapt to English football but then took his game up another level in 2021-22.

The 17-year-old winger scored seven goals in six appearances in the FA Youth Cup, including two in the 3-1 win over Nottingham Forest in the final.

Garnacho also made his senior debut against Chelsea in 2021-22 and was called up to the Argentinian national team set-up for the first time. 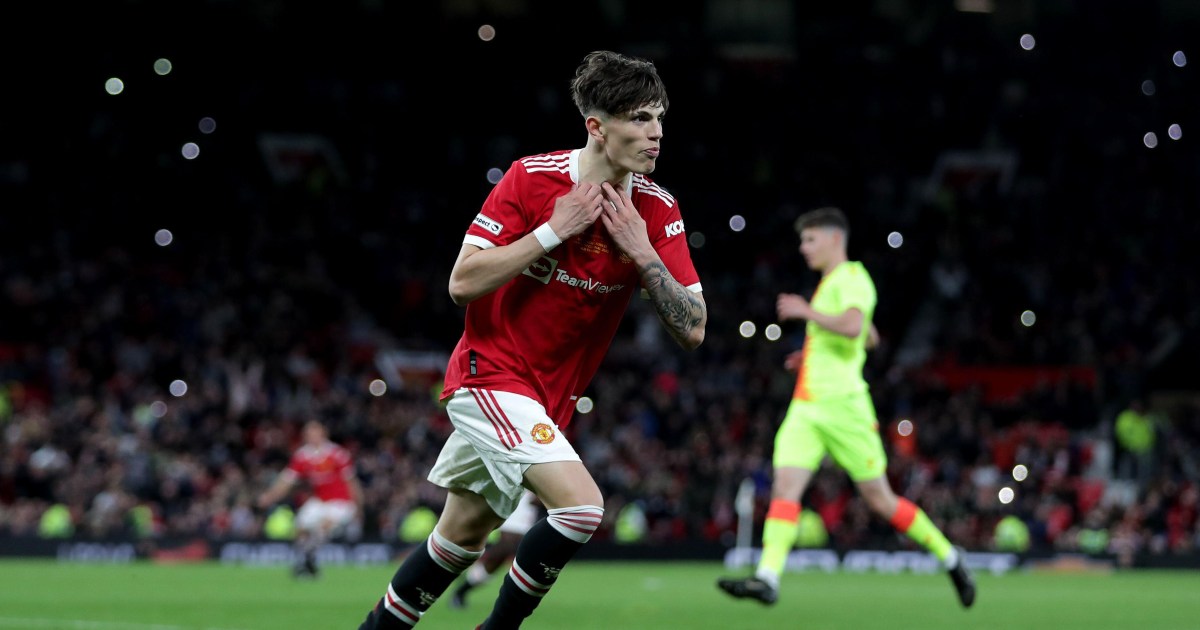